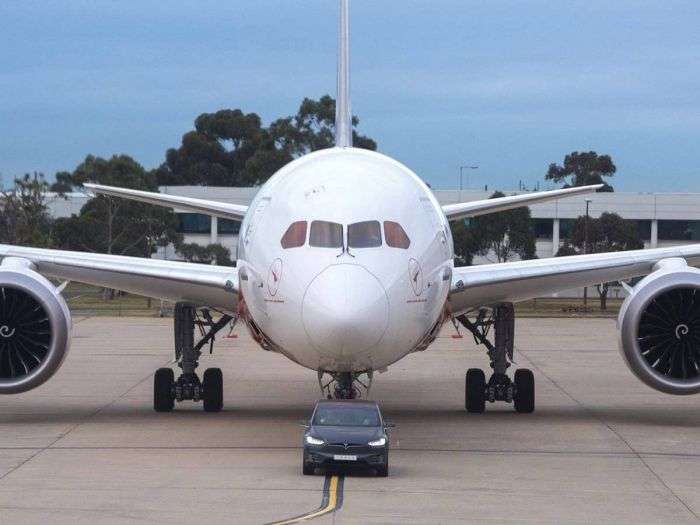 The Tesla Model X has a reported towing capacity of 5,000 pounds, but Australian Qantas Airlines shows that this electric SUV can tow more than any other electric car currently on the market. Watch this video, which shows how Model X tows a Boeing Dreamliner and beats a Guinness Record.
Advertisement

On the tarmac at Melbourne Airport, Australia, Qantas Airlines used a Tesla Model X P100D to tow one of its largest aircrafts, a Boeing 787-9 Dreamliner.

By pulling this massive weight, around 287,000 pounds, the Tesla Model X became the production electric vehicle currently on sale that could tow the biggest load. Tesla Model X name will now be included in the legendary Guinness Book of Records.

To get hold of one Model X, however, you have to be ready to take out the checkbook. In the United states it starts from $79,500. In Canada, the price of the Model X is $189,600 Canadian Dollars. Even the basic version of Model X, the one with a 75 kWh battery, remains very not-affordable for most people.

This is not the first time Qantas has used a Tesla as part of a marketing move. In April 2016, the Australian airline organized a race between a Boeing 737 and a Tesla Model S.

No Guinness record this time, but the result was just as impressive! Also see: Tesla Model X Doing Amazing In The Thick Heavy Snow.