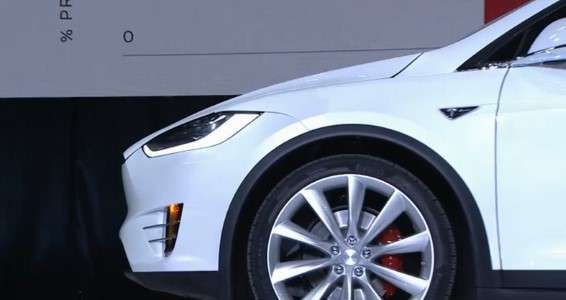 What a grand entrance. So majestic, so clean, so quiet and just a squeaky sound from the tires on the floor. After being welcomed into the meeting by Elon Musk with the mission “to accelerate the world’s transition to sustainable transport” the world was introduced to the Tesla Model X.
Advertisement

Tesla's Model X with it's MSRP of 80,000 dollars is the safest car ever made according to Musk and it achieved a 5-star rating in every category measured. The probability is only 6.5% of being injured in a crash. The simple reason for this is there is no gas engine. The front compartment crumple zone doesn’t have a steel engine which would end up in the passenger compartment in a high-speed accident.

Regarding side impact as well, the Model X and Model S are significantly less likely to have side impact intrusion when compared to the Audi Q5 Hybrid and Volvo XC60. The probability of the car tipping over is less likely because the base of the car is the battery pack which lowers the center of gravity. It also comes standard with Tesla “Active Safety” features. There are sensors surrounding the car and will provide automatic emergency braking and side collision avoidance which will steer you away from a side collision. It's giving you more eyes to see around you and protect you from unseen obstacles. It also includes “Air Safety” and Elon demonstrated the three different Hepa air filters in the car and translates into better air safety filtration. Elon has also created a new button to activate this hospital air filtration system and it is called the “Bioweapon Defense Mode” and it is an actual button on the car.

Another unique feature on the Model X is the Auto Sensing front door which will even open for you as you approach the car. It also has a Panoramic front window unlike any other cars visibility as it rides up into the roof. Another front seat feature is the blind holster for your mobile phone. After that, Elon moved onto the Falcon Wing Doors that can be opened from the driver’s seat. That is a great feature as you can open the passenger side rear Falcon Door to let a kid out at school, or practice or in front of a store.

Once the doors were open Elon expressed the great deal of time they spent on designing the beautiful 2nd-row seats. You can then press a button and the second-row seats open forward to allow all the kids to get into the third row of seats. Elon made a point to actually stepping into the third row to show that even he can fit back there so it isn’t exclusively for kids.

Next in the bag of tricks was the opening of the Falcon Wing Doors while two minivans blocked both sides of the Model X. This makes the rear doors move upward and then inward because instead of only one hinge like in Gullwing doors the Falcon Doors have two sets of hinges. Therefore even in tight parking spots, as demonstrated, this car is extremely functional. Additionally when inside a garage ultrasonic sensors detect obstacles on the sides and the ceiling so the doors will only open if unobstructed.

The next big demonstration was to show the Model X towing what looked like an Airstream trailer. The model X can tow up to 5,000 lbs and up to 7 passengers. So now you can go camping with your Tesla and most campgrounds, as many of you know, help you charge while there. When not towing you can carry 5 bikes on the custom accessory hitch that was put onto the Model X by a child in about 5 seconds.

After that the countdown began of the VIN numbers starting at 6 I believe and ended at VIN 1 which is Elon’s own Model X.

The specs are listed below and for speed freaks out there, yes, it will come with a P85D Ludacris button.

What are your expectations from this car? Does it appeal to those of you that are serious about the crossover car segment?