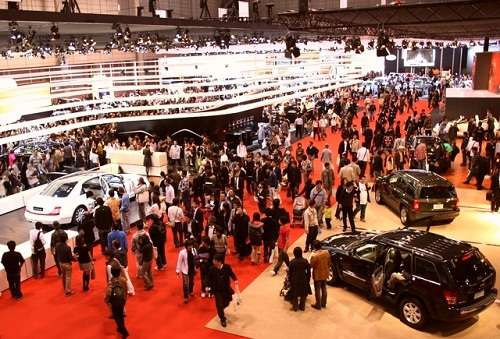 The press days of the 2011 Tokyo Motor Show start tomorrow on Nov. 29 and while almost all the Japanese car makers have world premiers lined up to debut at the show, these three big brand names surprisingly don't have any world premiers.
Advertisement

The organizers of the Tokyo Motor Show have put together a very helpful Booth Guide, which provides detailed information on the list of exhibits and exhibitors. Yet, there is a surprise. While all major Japanese brands use the show to make world premieres in addition to Japanese premieres e Lexus, Isuzu and Kawasaki have no world premieres scheduled at the show.

From commercial vehicles Isuzu has the biggest number exhibits, 8. Yet, it has no world premieres, and only two Japanese premieres. In fact, Isuzu made its latest world premier, introducing new-generation D-Max in Thailand in latest September of 2011. There is good reason why in Thailand and it's a subject of a different story.

From the Japanese motorcycle makers Kawasaki has the third biggest number of exhibits following Honda and Yamaha. Kawasaki has eight exhibits and no world premieres, but it has three Japanese premieres.

The world premieres, these days are where the major markets are. Jaguar, Bentley and Lamborghini do world premieres in Los Angeles because California is a big market for these carmakers. Speaking of California, Lexus world premiered its 2013 Lexus GS 350 mid-size luxury sedan in Pebble Beach, CA even before the LA Auto Show, on August of 2011.

Reference: Tokyo Motor Show
Image source: Wikipedia
The press days of the show will go from Nov. 30 to Dec. 1 of 2011. Tokyo Motor Show will be open from Saturday Dec. 3 to Sunday, December 11.

Auto driver wrote on November 29, 2011 - 9:46pm Permalink
The European carmakers are back at the 2011 Tokyo Motor Show in full force showing how important the Japanese market is for them, especially when it comes to clean/hybrid technologies. It's interesting that apparently Japanese market is less important for brands like Lexus, Isuzu and Kawasaki. I was hoping that all Japanese counterparts, in full, will show off their skills in this area.