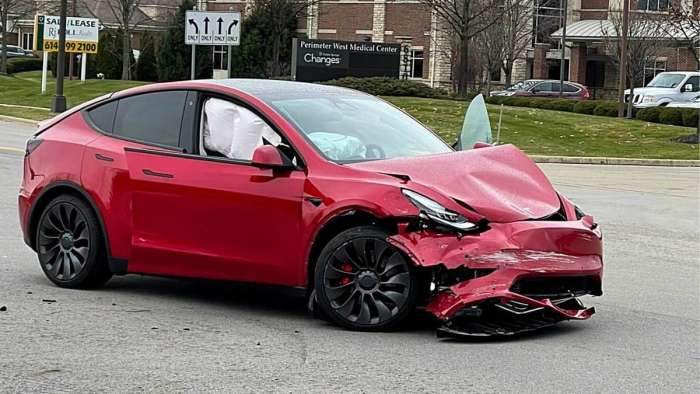 Tesla Columbus Ohio Owners Twitter account just shared this very telling picture of a Tesla Model Y after an accident and how the owner walked away with "no significant injuries."
Advertisement

When in February 2020 Tesla released its first Model Y production information, Torque News Tesla reporter Alex Bleauste said it screams safety, due to its stereotypical look that for some reason resembles a fish in the front and a sleek rear end that screams safety.

"The Tesla Model Y above all things puts safety at its core. The brand has always been serious about safety. The Model Y is targeted at being the safest car in its class. Large crumple zones and a rigid body structure maximize safety in the forms of impact resistance. Additionally, a low center of gravity which keeps it planted and torqued to the ground like a supercar," Belauste wrote in an article referenced above.

Today we just got a proof of Tesla Model Y's safety. Tesla Columbus Owner twitter account shared this image and some details from this Model Y accident writing, "Tesla saves another members life. Our member Lee Smith who tweets at @seelee walked away with no significant injuries." Per Smith's account, the other driver was gunning it and never saw him. Then they thank Elon Musk and Tesla for designing such safe cars.

Tesla saves another members life. Our member @seelee walked away with no significant injuries. Per @seelee the other driver was gunning it and never saw him. Thanks @elonmusk & @Tesla for designing such safe cars! pic.twitter.com/zotiqtHoQ6

You know, this is an important news, because while the Tesla Model Y is outselling entire brands as of mid October 2015 it had not been safety tested by the Insurance Institute For Highway Safety. Torque News senior Tesla reporter John Goreham looked into why that is and found out the Model Y at the time was not even on the schedule.

I am glad everything ended well in this Model Y accident, which once again proved that the Model Y is a durable and safe car.

I asked the owner Lee Smith for some more details and here is what he wrote to Torque News. Lee said The accident happened on Nov 24, 2020.

"I was turning left into a long 4 way road. The SUV that hit me said he never saw me and didn’t use his brakes. My wife, who was in the passenger seat (also no serious injuries) said he was going very fast. She didn’t see him until a second before impact. The location was Dublin, Ohio. When we were getting examined at the hospital nearby, the doctor said he nearly got hit TWICE on that road earlier in the day. I had just picked up my wife from the office park I was exiting from. Mobile phone was docked in the charger. No eating no any other distractions," Lee wrote.

He also wrote that he purchased his Tesla Model Y in August 2, 2020. "The only injuries evident thus far were from the seat belt, as well as some back and neck stiffness," Lee wrote to Torque News.

In the meantime, the Tesla Model Y is all about a Model 3, only taller and bigger. But it is also better equipped with the presence of equipment, which the electric sedan (the Model 3) did not benefit from. While the latter has caught up in this area, recently the Model Y also got some new updates, borrowing some new features that have appeared on the Model 3.

To close the loop, Tesla has therefore made some missing touch-ups that appeared on the 2021 Model 3 vintage. This is what Chad Smavatkul detailed on Facebook, who recently took delivery of his new electric SUV. The latter is thus equipped with double glazing at the front or silver buttons on the steering wheel.

This Model Y is also equipped with a USB port in the glove box and delivered with a dedicated USB key: this new device allows owners to save the images captured by the TeslaCam and Sentry Mode on removable media.

Tesla could not be more discreet about these developments aboard the Model Y. These should therefore now extend to all production, including the next European versions of the Model Y, which will be manufactured in the Giga Berlin.

Mark wrote on December 2, 2020 - 12:11am Permalink
Let us use a bit of perspective. People are spared serious injury every day and in every brand of car of recent vintage. This is not just a Tesla thing. This is a consequence of researchers and activists lobbying for strict standards for autos. The fact that airbags, and a crush zone spared this person is a testament to that regulation. Regulation comes from public demand; not idle bureaucrats thinking of new ways to bedevil the public.