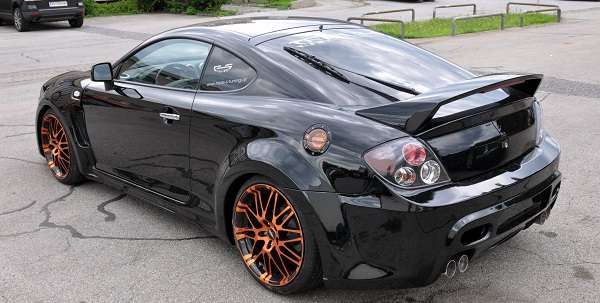 A very interesting story about Hyundai Tiburon GK V6 2.7, 2004 from Graz in Austria, which some have called the testing ground for Hyundai to see if it can create an affordable coupe, resulting in Hyundai Genesis Coupe.
Advertisement

I didn’t have a special brand or model in my mind when I started looking for a new car. The idea was to find a car that didn’t look off the rack – nothing that was roaming the streets of Austria, my home country, in hundreds and thousands, like VW Golf or an Audi – and that had not or hardly been customized yet. Finally, I found that eye catcher I had been looking for: A Hyundai Tiburon GK V6 2.7, 2004 model, ebony black. My personal Black Beauty stood right in front of me. Honestly, if I only had had the slightest clue how many hardships I would have to face with that car and how much time, money and last but not least NERVES this car would cost me, I would have turned on my heel and happily would have bought a Golf or Audi.

Soon after I had bought the Tiburon – in 2006 – I started forging plans about how to customize the car. I didn’t have customizing or parts in my mind at first place – however, certain criteria had to be fulfilled. I wanted to do something really unique, nothing off the rack, premium quality parts – speed and sound of course mattered to me, however, the outward appearance of my Tiburon was my main concern at first – I wanted a complete makeover from radiator to tail lights. Another criterion was that all customizing work and parts used had to meet the demands of Austrian road regulations, as I wanted to drive my car legally on the streets. At this point I should mention that Austrian legal framework doesn’t leave too much room for customized cars – regulations constantly change and vary from federal state to federal state. So I spent a long time making up my mind what I wanted to do and doing research which parts would both, meet my ideas and the strict legal regulations. As the car is so rare and unknown in Austria and many people already took it for ready-customized the way it was. I didn’t feel too much pressure and took my time to find the perfect parts. My head was full of thousands of ideas – every time I thought I had found that perfect design concept for my Tiburon, I found something new and I changed my ideas again. When I finally presented my ideas to friends or in internet forums people laughed at me and called me crazy – called my ideas idiotic and impossible and my car a rice boiler. Well, guys, writing these lines, telling the story of my car there’s nothing left to say, I believe. During this time-consuming research stage I turned to the inwards of the car and spent some time on the sound system and minor changes like tail lights, replacing emblems etc.
Something like a year after I had bought the car, the first problems started – besides that I almost torched the car due to a broken wire of the sound system – it suddenly refused to start, which was the first of so many times I contracted a qualified work shop to have a look at the problem. And, it was the first of so many times, desperate mechanics called me to either tell me that they didn’t have a clue what the problem could be and had randomly exchanged parts that could have caused the trouble or tell me the car was a piece of metal crap and simply a lemon car I should get rid of or that I should come to the work shop and help them fix the car together again as they kind of had lost track. Well, you might understand that my trust in qualified workshops is limited. Over the years, my Tiburon spent more time on the service lift than on the street –once some 5 months in a row as the clutch simply refused to work after some 10 gear shifts and even replacing the clutch didn’t fix the problem. Instead of customizing I spent time and money on finding out why the car wouldn’t work. Today I know that most of the problems were caused by unexperienced mechanics. So, time passed by and every car show season ended with the words, “Next season I’ll put the Tiburon on shows too”. It almost seemed that my car had some kind of weird stage fright and simply refused to work. I don’t know how often I was at the verge of selling the car, but every time I looked at this beautiful ebony black car my anger softened.
During the long time when my car was stalled I still found some time to follow my actual goal and find some suitable parts – considering the state of the car at times this was really optimistic.

Most of my former ideas had vanished, but what still was on my mind was a really good looking wide body kit. With the Outlaw Wide body kit of Ibherdesign, a specialized Portuguese manufacturer of body kits I found the wide body kit of my dreams – and finally also found a group of specialists who were able and willing to mount the body kit on the car according to my wishes. What I wanted was that the body kit would be fit to the car so that it appeared out of one piece. Getting the body kit successfully onto the Tiburon re-ignited the project Black Beauty that had been stalled so many times that I had almost lost faith in it. Looking back it seems to me that the Tiburon just waited for me to make up my mind what I actually wanted to do and find the right people to realize the project.

Some 6 years had passed after I had bought the car and – I had grown mature during these years and some of my viewpoints on the car had shifted. I focused on my car and eagerly started putting together a new design concept and started gathering the parts. Today, the new Black Beauty 2.0 features the following highlights:
Please note: Some of the parts listed have been installed lately and are not displayed on the pictures.

HIMMG – How I met my girlfriend

One day, this might be the story I find telling myself to my future kids about how I met their mother. So far, it’s the pretty stunning story about how I met my girlfriend – and my car played a major part in it. It was in April 2007, when a friend of mine called me and asked me the favor of picking up his latest crush in Klagenfurt, Carinthia – some 150 kilometers (100 miles) from my home base Graz, as he was at a party and had already drunk a considerable amount of beer. The poor girl had fallen asleep on the train from Vienna – where she used to work back then –and the train had proceeded to Klagenfurt. Having worked all week she was desperate to get home and didn’t want to stay a night in a hotel.

My name came up to his mind, as he knew that I had just bought my new car and spent a lot of time cruising around so he thought I wouldn’t bother a 300 kilometer (200 miles) ride too much. I agreed and hit the road. I vaguely remembered having met that girl before in a local bar, however my memory was kind of blurred. On my way I called her and told her that I would arrive soon. I really don’t know what was on her mind back then – she sounded something between very suspicious and very relieved. Finally, I turned to the road that led straight to the train station – it was almost midnight, the street as empty so I sped up the car and let the engine howl. There I was – the hero, the knight in his shiny new car. At the end of the road I spotted a female silhouette, frowning at the noise – I just had enough time to think “oh, that must be her”, when suddenly a car from a side street cut in on me. I managed to brake and steer the car to the other lane of the road – turning the steering wheel pretty violently I accidentally hit the switch for my front lights and turned them off for a second until I managed to turn them on again. It took me a second to realize that the girl must have watched the whole scene and that my shiny knight image might be bruised by now. The silhouette at the end of the road hastily grabbed her bag and backtracked from my sight. With screeching brakes I came to a halt in front of her. The look in her eyes said “No, you must be looking for somebody else.” “You’re waiting for a taxi to Graz?” I asked her. “Uhm,…no, yes, but no – I’m waiting for somebody.”.”Well, that’s me, get into the car.” She replied something grumpy-sounding and got into the car “Turn on the heaters, I’m freezing.” she ordered. Nice.

Now, the rest of the story is told quickly – during our ride back the little ice queen thawed a little, however there was a though moment, when I steered the car with my knees while skimming through a selection of CDs – and I had the chance to explain my little mishap. We stayed in contact, that relationship with my friend broke apart – that was 7 years ago and we’re still together and happy.

Dave Suton wrote on February 11, 2014 - 9:27am Permalink
Great story but Korean (like all Asian branded vehicles) are ugly unreliable overrated Junk.
Michael wrote on February 11, 2014 - 3:03pm Permalink
well that's your opinion! what do you drive?
truth wrote on February 13, 2014 - 7:42pm Permalink
lol, when the GK Tiburon/Tuscani came out many journalists compared it looks to those of the Ferrari 456, even top gear liked the car(season 2 episode 3) and about the reliability, as a proud Tiburon owner, these cars are super reliable, guaranteed you will have trouble finding a tiburon in a junkyard. there are 500k mile tiburons roaming around the US actually. 10/10 made me replay to a failed troll attempt.
Israel riverA wrote on April 27, 2014 - 12:39am Permalink
I have a 03 tiburon nd I can't think how to custom it can u help me
Eddie T wrote on April 29, 2014 - 6:24pm Permalink
Great story love your passion to keep faith with car at the start,im having same problem tib just wont start they tried everything last thing they will try is put in new BCM if that dont work they are giving up,ill stick with it till i get it back on the open road
TuscaniCustoms wrote on July 2, 2014 - 6:18am Permalink
What a nice story :) I also meet my first girlfriend because of my car, relationship didn't last but anyway. I enjoyed reading whole story.
Matthew wrote on August 15, 2014 - 5:10pm Permalink
Wow, amazing story! I love your car too!