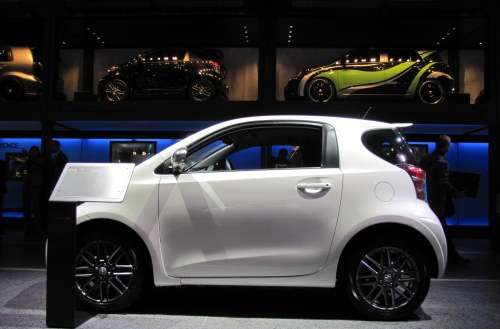 A Canadian driver shares his experience of how 2012 Scion iQ performs during winter time.
Advertisement

Many drivers, when considering to purchase a small car (used or new) like Scion iQ, are faced with one major question among many others. How will a small car perform during winter. Everyone knows about the limitations of driving during winter, especially if one is in the Northern regions of our planet.

Denis Duquet of the Le Guide de l'Auto, has recently taken a 2012 Scion iQ to what he calls a "winter hiking," test driving its performance in snowy roads in Montreal. He writes that his test was not an exhaustive one, but it permitted him to test certain elements and especially how the car handles snowy roads.

Toyota markets Scion iQ in Europe under its own brand, but for some reasons entrusted the North American marketing to its Scion division. While test driving the 2012 iQ, Duquet writes that he kept two other small comparable cars in the same size: Fiat 500 and Smart. Smart is smaller than iQ, but Fiat 500 is little bigger in dimensions with longer wheelbase.

Automakers protects drivers and passengers in case of a collision with airbags. This is a bigger challenge and a bigger concern for small car buyers. Scion has done a good job here putting 11 airbags. This includes a a tailgate airbag, the first in the world. However, usually the rear seat of the Scion iQ is rarely used because it's mostly folded down to permit more loading space in the trunk.

On dry pavement, Duquet writes, the acceleration of the 2012 Scion iQ is correct in its class and the handling is uneventful. Broad view, relative to its size, ensures proper stability when doing curves. "Even when the road is covered with snow, the car does not lose its main features in terms of engine, transmission, steering and braking, he writes. This is particularly important for people who are worried about the handling of small cars in snowy roads, during winter.

"On the road, I strived to find places where there were several inches of snow on the ground, to check the ground clearance, the effectiveness of traction control and ABS brakes." As a result "the traction control is not too sensitive, unlike many other Toyota products. There seems to be an exception to the iQ. It should also be added that winter tires Dunlop 16-inch mounted on the car provided excellent traction," concludes Duquet. When making round in circles "the system was effective and intervened just in time: not too soon and hopefully not too late either. ABS brakes do not work too hard because of the lightness of the car. And after trying to cross the snow left by the snow removal vehicles, I tried to get bogged down, but without success."

Duquest concludes that Scion iQ should "succeed in the game" during winter. However, the quality of roads and the removal of snow are another factors that can affect small cars as well as SUVs. The challenges, faced by small cars in winter, may be faced by big SUVs or mid size cars, if the roads are not well taken care of in winter.

One more added benefit of small cars during winter. It is very easy to remove snow and to demist it due to the car's small size.