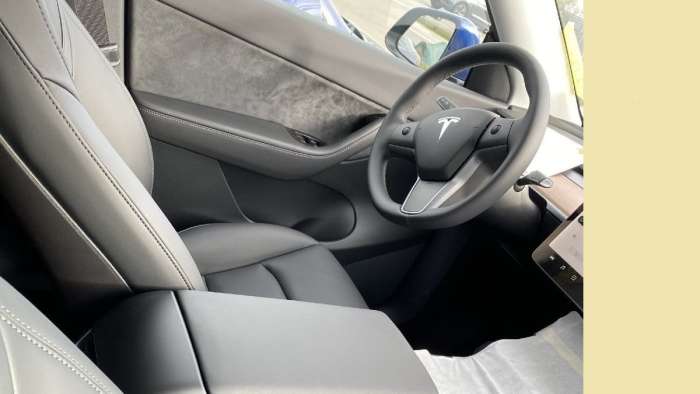 This is Armen Hareyan from Torque News. Before you take a look at the video and my commentary, please take a moment and subscribe to this channel because later today I am going to bring more updates from Tesla Giga Berlin and the Model Y.

Yesterday an unknown Youtube user, named Car Hauler, posted this rare video of the Tesla Model Y, which clearly shows the car’s exterior from a close look and the interior. It’s basically a close by walkaround of the Tesla Model Y. Let’s take a look at the video with my commentary.

OK, what can I say about the Model Y?

It looks like this video is done by a Tesla employee, a contractor at the Freemont factory or more likely the truck driver who is about to ship this car to its owner. We saw that the Model Y is in a Transport Mode and getting ready to be shipped to its owner. Last week we learned that Tesla was sending emails to some Model Y reservation holders asking them to choose a date for March deliveries and after they configured their dates they god emails from Tesla saying “prepare for your Model Y delivery.” So it’s very likely that this Model Y is getting ready to be shipped to its first owner.

By looking at this Tesla Model Y you think that the chrome is deleted from the car's trim, but it's simply may be the protective tape. At some point in the video, you get an impression as if you are looking at Model X, and at another point, it's like the Model 3. This is why above I said that the Tesla Model Y looks like a mix of these two cars.

What else I can say. The panels are fit and the finish looks spot on.

See you in my next story discussing Elon Musk's attendance at Giga Berlin and when it will take place.

Armen Hareyan is the founder and the Editor in Chief of Torque News. He founded TorqueNews.com in 2010, which since then has been publishing expert news and analysis about the automotive industry. He can be reached at Torque News Twitter, Facebok, Linkedin and Youtube. You can read Armen's Tesla stories at Tesla news reporting at Torque News.

DeanMcManis wrote on March 2, 2020 - 1:45pm Permalink
It is nice to see production Model Y's getting ready for actual shipment to pre-order customers. Most everything that we see in this video is familiar as the Model Y is very similar to the Model 3 that it's based on. I am looking forward to seeing comparative videos with the Model Y Performance and it's EV competitors come out soon.

Tesla-Funded Research Reveals One of The Biggest Mysteries of EV Battery
Tesla Tesla Buyer Nets a Whopping $12,000 Discount After Asking for Reduction
END_OF_DOCUMENT_TOKEN_TO_BE_REPLACED