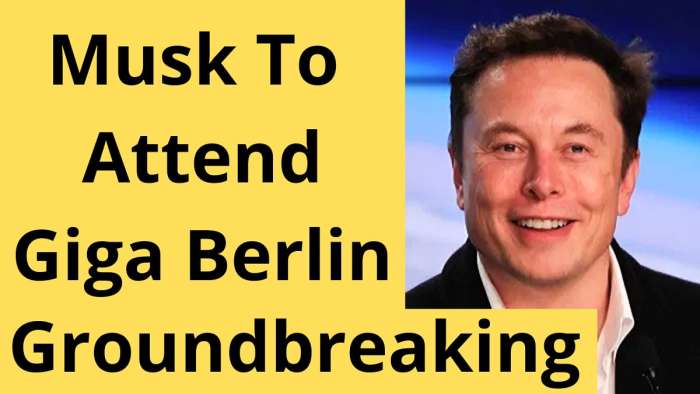 We have breaking news, everyone. Elon Musk just confirmed that he will attend Tesla’s Giga Berlin groundbreaking ceremony, taking place sometime during the second half the March.
Advertisement

He said that he was very pleased when the Tesla CEO Elon Musk announced the location of the new plant now known as Giga Berlin. Nevertheless, due to the fact that Tesla had an ambitious schedule, Steinbach was excited that the automaker would not have time to clear the territory for the planned plant in the specified time. But Tesla did a great job despite the seatbacks which I have reported in the past few weeks daily on this channel.

Here is how Tesla decided to choose Berlin for Tesla's Gigafactory 4.

On the morning of November 12, 2019, Tesla founder Elon Musk took a personal look at the area in Grünheide. In the afternoon he made things clear with Steinbach in the Berlin luxury hotel Adlon. And in the evening he announced at a car award ceremony: It will be Berlin! Well, almost. Grünheide is located around 20 kilometers southeast of the capital.
It continues at this pace. After two environmental associations flashed their lawsuits in court, Tesla cleared around 90 hectares of pine forest, the area for the first construction phase. Now the stumps are removed and the ground leveled.

In addition, the final purchase price for the property must be strapped down; According to expert opinion, it is slightly above the originally agreed 41 million euros. When all of this has been resolved, you can start. "We expect the groundbreaking in the second half of March," says Steinbach. And he said it will be great if Elon Musk attends the groundbreaking ceremony. Earlier, last week Torque News, making a reference to Grunheide mayor, explained why Tesla's Giga Berlin groundbreaking ceremony may take place in the 2nd half of March.

Musk tweeted at 4 AM Eastern Time this morning and wrote “Definitely.” So, it’s confirmed. God willing, The Giga Berlin groundbreaking ceremony will take place during the second half of March and Elon Musk will attend the groundbreaking.

Tesla cleared about 90 hectares of pine forest for the first phase of construction. At the moment, excavators have almost finished tearing out stumps and leveling the ground. Workers are actively laying power lines to continue construction work.

"We expect an innovative project to happen in the second half of March," Steinbach says in an interview with FAZ, “I would like Elon Musk to come back to Germany for this. This would be an important signal for the locals.”

Armen Hareyan is the founder and the Editor in Chief of Torque News. He founded TorqueNews.com in 2010, which since then has been publishing expert news and analysis about the automotive industry. He can be reached at Torque News Twitter, Facebok, Linkedin and Youtube. You can read Armen's Tesla stories at Tesla news reporting at Torque News.

Tsingshan's Threat to Tesla: EV Maker Is In Battery Crosshairs
Tesla-Funded Research Reveals One of The Biggest Mysteries of EV Battery
END_OF_DOCUMENT_TOKEN_TO_BE_REPLACED