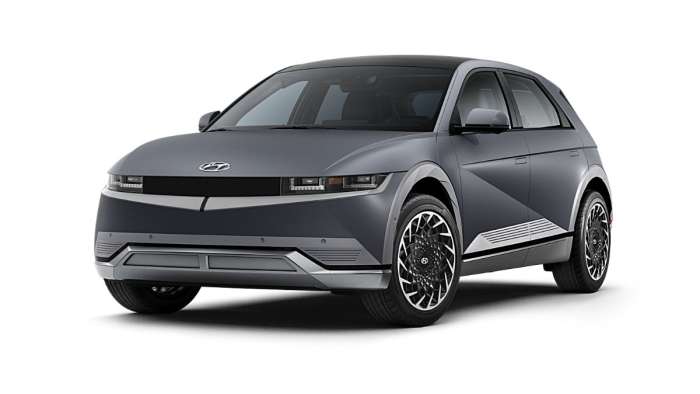 Hyundai Ioniq 5: An Electric 'Retro' That Advances The Future of The Brand

Hyundai Ioniq 5 is the first model of the 100% electric Ioniq sub-brand in which design is the protagonist.
Advertisement

With the electric future of mobility increasingly closer to being present than future, brands seek to position themselves in the best possible way for this new stage of the automotive industry. And at Hyundai they are clear about what they want to achieve, which is nothing more than to be, by 2025, the number one provider of electric mobility in Europe. With this goal on its agenda, the company is working to offer vehicles that stand out from the rest, as well as technologies that make all of this easier.

Last year, for example, 60,000 electric vehicles were sold in the European continent, which corresponds to 13% of Hyundai's total sales in Europe. This is a number, which Hyundai expects to increase to 560,000 units in two years.

But in addition to pure electrics, Hyundai is also betting on hydrogen as an alternative for mobility, especially for large vehicles. In 2025, which seems to be the key year for the Korean company, Hyundai will have more than 1,600 trucks powered by fuel cells, technology that they will transfer to maritime transport, or that they already use in the high competition of electric vehicles, charging them through a hydrogen generator.

In all this strategy Hyundai is working on, there is a name on which a great importance falls: Ioniq, that 100% electric sub-brand with which Hyundai wants to stand out among zero-emission vehicles, and that some automotive journalists have already had the opportunity to review, specifically the first Ioniq model: the Ioniq 5.

The Ioniq 5 is a medium-large size CUV, with a design that mixes the futuristic with the retro, giving it a personality that does not leave indifferent. The foundation of Ioniq 5 is built on Hyundai's new specific platform for battery electric vehicles: the E-GMP.

Starting with the most obvious, which is the design, the Ioniq 5 EV takes inspiration from the Hyundai Pony, the company's first production model. The most striking and that remains as a personal mark of the car, are the headlights of the Ioniq 5, both the front and the rear, formed by pixelated headlights in the shape of a square 'U.' Each of these rectangles has 246 individual pixels, with those in the back area showing a horizontal rectangle-shaped design, which actually corresponds to a character from the Korean alphabet.

Hidden between the headlights are all the sensors that help the driving aids and assistance to work. If we continue with the front, the Ioniq 5 is equipped with Hyundai's first 'clamshell' bonnet, which moves the cuts of the bonnet towards the sides of the body, giving a cleaner look to the whole. And this cleanliness or simplicity in the design is one of the keys to the model. The designers wanted it to be more minimalist and simple. They highlighted the proportions and silhouette of this electric vehicle without distractions, as evidenced by the retractable door handles flush with the bodywork, or its angled shapes in profile.

The wheels of the Ioniq 5 can be 19 or 20 inches, varying depending on the version you choose. In line with this, depending on the version, the Ioniq 5 can have all the lights integrated in the upper part of the grill 'bar' or with lower elements. That is, the highest version has it all built in, leaving the lower areas of the front and rear clean. In lower-end versions, the fog lights are located in the lower part of the front, while in the rear we see the same with the indicators, for example. 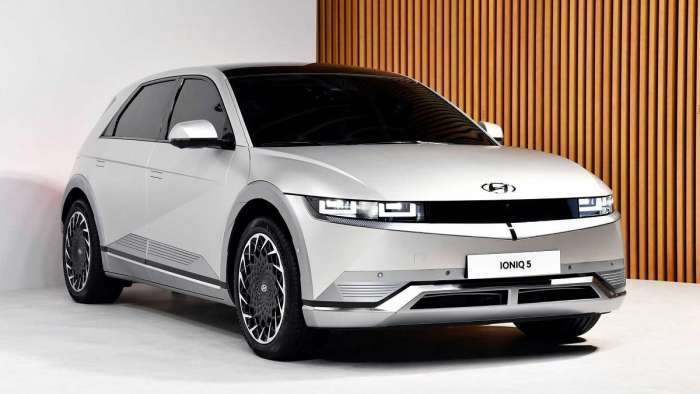 But if there is something that really draws attention to Hyundai Ioniq 5, is that in photographs it does not seem as big as it is in reality. The E-GMP platform has given designers an almost total level of freedom, thus creating the most spacious and modular interior.

For example, the legroom for the rear occupants is really generous, thanks to the three-meter wheelbase, which allows these seats to slide forward and backward by up to 135 millimeters. The front area for its part has electrical adjustments and even a 'relax' function,that reclines the seats and raises a platform for the legs as if it were a first class seat in an airplane. This allows users to relax or even take a nap while the car is charging.

Also, many of the interior items; seats, headliner, door upholstery, floor, armrests ..., they use ecological materials and from sustainable sources. This includes recycled PET bottles and plant-based yarns, as well as natural wool yarns, eco-processed leather with plant extracts or organic paint. 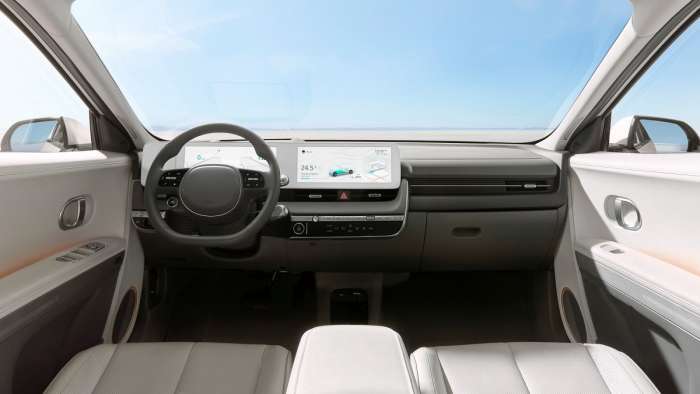 At the top of its dashboard, which sports a clean and horizontal design, we find a large running surface that encloses two screens: the central 12-inch and the digital instrumentation panel, with the same size. This is perfectly complemented by the Head-Up Display, which we see projected on the front window, an element that for the first time has augmented reality, which helps us with navigation information superimposed directly on the ground, making it more simple to follow the guidelines.

Ioniq 5 is also the first Hyundai model to offer Highway Driving Assist 2 (HDA 2) for road driving assistance. HDA 2 allows, through the use of the front view camera, radar sensors and navigation data to control the speed of the vehicle and the distance with the vehicle in front. At the same time it keeps the car in the center of the lane. To this are added other active safety systems such as the frontal anti-collision assistant, the anti-collision assistant in the blind spot, the intelligent speed limit, the driver attention warning, the high beam, etc.

Battery, Range and Charging of Ioniq 5

Mechanically, Ioniq 5 is available with two battery options: 58 kWh or 73, as well as two electric motor configurations: with one rear or with two, which gives it all-wheel drive. When equipped with rear-wheel drive, 73 kWh battery and 19-inch wheels, the maximum range combined with a single charge is nearly 300 miles (481 kilometers according to the WLTP cycle), reaching up to 425 miles (686 km) in the city.

Once you run out of electric power, the Ioniq 5 allows 400 and 800 volt charges, offered as standard on the platform without the need for additional adapters or components.

Thus, with a 350 kW charger, the Ioniq 5 can go from 10 to 80% in just 18 minutes or reach an additional 60 miles (100 kilometers) with less than five minutes of charge. But there is one element that differentiates it from the rest: the innovative V2L (Vehicle to Load) function, which allows the Ioniq 5 to charge electrical elements such as bicycles, scooters, camping equipment, etc., using the car battery. The V2L function can supply up to 3.6 kW of power, so you could even charge another electric vehicle if you wanted.

One of the automotive journalists who test-drove and reviewed the Ioniq 5, Santiago Casero describes his experience at the wheel of Ioniq 5. He writes "after so much expectation created with the car, we wanted to put ourselves at its controls, and we had the opportunity to do a few kilometers with it, both in the city and on the highway. The version that we got was the rear engine and 170 horsepower. The all-wheel drive model with two engines has an output of 300 hp, but was not available for testing at the moment. The first thing that strikes you when you get on this Ioniq 5 is its width, both in the front area and if you turn and look at the rear. The central area between the seats, which has a sliding console, is huge, with space to store even a backpack, as well as a wireless charger, cup holders, a tray to leave large things, armrests, etc. Once you put the vehicle in gear, it feels like a robust car, with a very particular touch, a heavy steering and a very thick steering wheel , which gives you that feeling of a large car than a Tucson and just as tall."

Casero also reports that the feel of the materials used in Ioniq 5 is good, with special mention of the turn signal levers, the 'cams', or the gear selector, with metallic finishes. On the steering wheel it has a button that allows the driver to select the driving modes, which are three: Eco, Normal and Sport. The difference between the three can be seen immediately, in addition to the fact that the instrument panel changes depending on the mode you select. Behind the wheel you will find some paddles that allow us to select the degree of regenerative braking applied by the car when taking the foot off the accelerator, which is also accentuated when you realize that it brakes automatically and very correctly depending on what the car that precedes us does.

On the road Ioniq 5 is silent. It is not a noisy car. The battery consumption that Casero managed to obtain in combination of city and highway, ranged between 15 and 17 kWh / 100 km, which is not excessive if you take into account the vehicles dimensions and weight: almost two tons. "If, for example, we charged at a public station at 25 cents per kWh, it would mean traveling 100 kilometers with between 3.75 and 4.25 euros," Casero writes, as he reviewed Ioniq 5 in Europe.

As a conclusion, don't miss these 5 important things one needs to know about Hyundai Ioniq.

LG's New EV Battery Plant Is a Welcome News for Tesla
Tesla Giga Berlin's New Hurdle: It's Not Only the Gov't, but Now Tesla Itself
END_OF_DOCUMENT_TOKEN_TO_BE_REPLACED