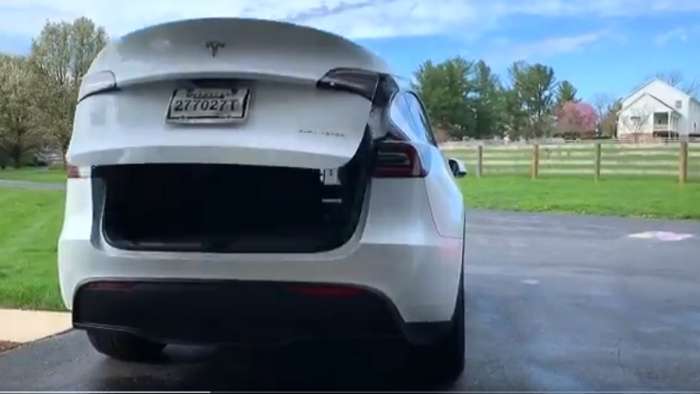 Tesla Model Y can be opened and closed via SIRI and one Model Y owner demonstrates how to do that and what apps you need for that.
Advertisement

Today I saw this very cool demonstration by Ryan Wallace on Twitter demonstrating how you can open and close the trunk (and possibly the doors and frunk) of your Tesla Model Y.

Watch my video where after a brief introduction I am enabling the voice for you to hear how Ryan demonstrates opening and closing his Model Y by using SIRI and a special app.

So this morning I saw this presentation on Twitter where a user named Bryan Wallace opens and closes his Tesla Model Y via SIRI. He says You don’t need an automatic foot sensor when you can just have your phone do it hands free.

How good is this!!! The @Tesla Model Y can open and close via Siri. You don’t need an automatic foot sensor when you can just have your phone do it hands free. Sorry if you Siri hears this. #ModelY pic.twitter.com/AQElQP8Mmi

Ryan also says You need the @StatsTeslaApp. It has Siri widget integrations, which is outstanding. You can also use it on your Apple watch. He says he personally prefers the @TezLabApp, but it doesn't have Siri integrations yet.

Ryan says it doesn't work with Google Assistant yet, but only with SIRI from what he can see. He also says his SIRI is only activated by his voice. He had his family try to say “Hey Siri” but it only responded to his voice.

Another user, following this discussion said "Tesla remote app does this. It's a lot cheaper. You can add Siri Shortcuts for lots of actions including this and wind up/down the windows etc. They also then work on the Apple Watch. The first time it asks you to confirm, but not after that.

Timothy Parker wrote on April 23, 2020 - 11:11pm Permalink
Looks like he's already dinged his hatch door. People have said this was going to be a problem!