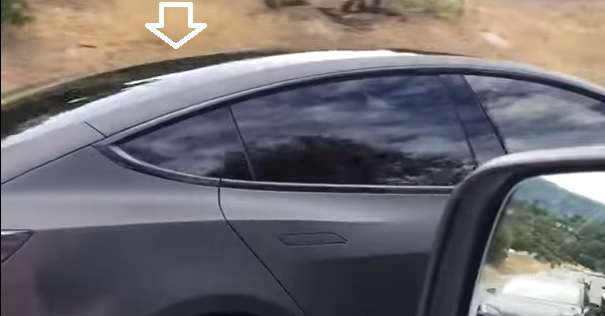 Glass Roof in Tesla Model 3, Standard Feature or One of Options

Many Tesla Model 3 owners are very much interested in Model 3 roof options and would like to know if the Model 3 will come in a glass room and if it will be a standard feature. We can't answer this question, but here is what we know about it.
Advertisement

Do you remember when several days ago Tesla Model 3's spy shot video appeared on YouTube? In it you could see a possible production version of Tesla Model 3 driving on a public highway in California, close to Tesla's headquarters.

When looking at the video carefully, it seems to me that it has an extended curved glass roof. You can see from this image of that Tesla Model 3, which is a screenshot from the video. It seems to me that the glass from the back of the Model 3 is extended all the way through the roof. What do you think?

Now, will this be the final production car? We don't know. We also don't know if a curved extended glass room may be one of the options for the Model 3 owners or come standard. If optional, that could drive the base price of the Model 3 significantly.

In Tesla's forum, a user named Orland, writes that Tesla's SEO Elon Musk "did make a point of pointing out the extended curved glass was used to make sure people in the rear seats did not feel as cramped. So an educated guess would be standard and anything else is an option." This is a good guess, but as with everything, whether the extended glass roof is standard or optional will be open to any interpretation until Tesla Model 3 is revealed second time officially.

First, let's make it clear that when we talk about options for Model 3 Sunroof we refer to "from middle section above the front seat" area of the roof. People who think an extended glass roof is going to be a standard feature in Tesla Model 3 reason it with the fact that it will be easier to install and therefore, probably cheaper. "The discussion is only for the middle section above the front seats. The windscreen and glass above the rear seats which extends as the rear widow are standard. Previous speculation is a glass midsection would be glass as standard since it is easier to install. A metal section would require internal covering as well, and a pano-roof would include motor and mechanical bits, and so both more expensive," comments one person in Model 3 forum on Tesla's webpage.

Yet, who knows? We could be wrong.

On the other hand, another person in the same forum writes that he has asked the staff at Tesla in Leeds, UK about the Model 3 roof options. According to him, while the staff members couldn't confirm, "they were 99% sure" that metal roof section will be the standard with Model 3. This means, there will be levels of upgrades as options. Perhaps the first level of options will be just glass, and the second level being panoramic sunroof.

What do you think about the options of sunroof in Model 3? Do you prefer the metal, just glass or panoramic roof?

pepper wrote on June 25, 2016 - 3:51pm Permalink
That's obviously the same car they already showed us. They've made only 3 prototypes revealed to the public, a silver, a black and a red. That's the black one. It's got the sunroof because that's what they were showcasing when they first were revealing the prototype. Will the final version have a sunroof like that? Who knows. Will it cost extra? Duh. When in the history of forever hasn't it.
Jeff Middlebrook wrote on April 18, 2017 - 1:11pm Permalink
I should have never got into the driver's seat of the Model X. My wife warned me. If you have you will agree with me that the Model 3 windshield should match that of the Model X . The entire roof could be 2 pieces of glass. The windshield piece should resemble the Model X that extends to the B pillar. The second piece of glass extend from the B pillar to the trunk. I would gladly give up a sunroof in lieu of the Model X windshield. Actually this scenario would reduce cost and production time. Structurally it could be accomplished as well.