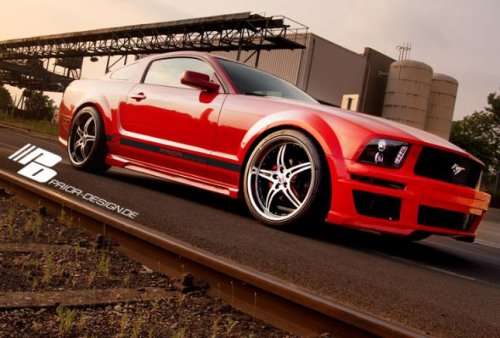 The 2005-2009 Ford Mustang just got a new European look courtesy of German tuning company Prior Design – which has put together the body kit shown on the right side for the early S197 generation Mustangs.
Advertisement

Recently, the German tuner Prior Design decided to tackle one of the iconic muscles cars of America: the Ford Mustang. The car itself is timeless and has been subject to many types of aftermarket redesigns by other companies around the world but for Prior Design, this is their first attempt in the world of the fabled American muscle cars.

This new body kit from Prior Design fits on the early S197 (2005-2009) Mustang. It consists of a new front fascia, a unique open-bottomed rear fascia, and deeper side skirts which make the car look more aggressive while also improving the aerodynamics of the Mustang. According to Gentside, the work has been awarded a TÜV Rheinland Global Compact Award.

In the past, Prior Design has mainly focused their efforts on European models such as the Porsche Cayenne and the Mercedes Benz M-Class but with the kit shown above on the right, Prior Design offers 2005-2009 Ford Mustang owners a touch of European flare.

The new Prior Design body kit for the 2005-2009 S197 Ford Mustang carries a price of 1,100 Euros which translates to around $1,367 US Dollars. As body kits go, $1,300 is a pretty average price for a package that includes the front and rear fascia along with the side sills. Those looking for the complete package can also opt for the unique wheels shown in the image as well as an exhaust system design to work with the Prior Design rear fascia.

As Germany and the rest of Europe does not have that many Ford Mustangs running around the streets, it's hard to say if this undertaking will be successful in Germany. However, there is a good chance that some US-based Mustang owners will look to add the European styling of Prior Design to their American muscle car.