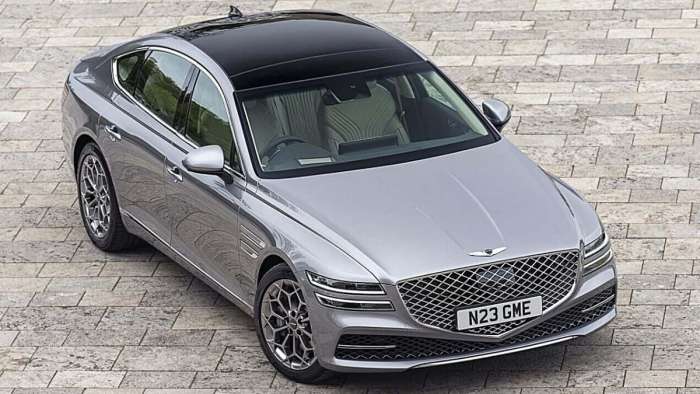 Genesis EV Is Coming To Europe In Tesla Style

Genesis, Hyundai's luxury brand, has revealed all the unknowns about its coming to Europe, including its electric models, and in Tesla style. It will land in the Old Continent this summer and sell its cars without using dealerships. That's what I meant by "Tesla style."
Advertisement

Genesis will be rolled out in Europe gradually. Initially come to the UK, Germany and Switzerland this summer and later will increase its presence to more European countries, among which is expected to be Spain.

The first models to be marketed will be the Genesis G80, a large stately saloon with the air of a coupé that will stand as a rival to, for example, the Audi A7; and the Genesis GV80, the Korean large luxury SUV. Shortly after they will be followed by the new G70 and GV70.

The brand has also confirmed that the electric version of the Genesis G80, recently unveiled, will be the first fully electric Genesis model to reach Europe.

Following this, Genesis will launch two more battery electric cars, one of them built on a dedicated electric platform. They will arrive during the first year of the brand's existence in Europe.

Home Deliveries and Goodbye To Dealers

Genesis will start selling cars in Europe five years after its creation and will do so by betting on a business model that is still incipient in our continent: eliminating dealers from the buying process .

"It is true that it is not a disruptive model since there are already brands such as Tesla, Lynk & Co, the new Volvo and Geely brand; the Chinese Aiways, or Volvo with its electric cars, which have already launched the sale of cars online, but it does reinforce the theory that today dealerships are expendable. At least until the end of the process," explains David Galan from Motorpasion.

Genesis will propose to its customers a business model in which the configuration and purchase will be done online, while deliveries will be made at home or at the buyer's office. The goal is to "eliminate the need to visit a dealer forever," the brand details.

However, Genesis will have three retail studios located in central London, Munich and Zurich in which it will also be possible to undertake the acquisition of a car.

To dispel the doubts of its customers about the purchase process, the manufacturer will offer what it has called the "Genesis Personal Assistant," which will essentially be a contact figure for the brand to resolve any questions during the purchase process.

Genesis will also offer a 'Five-year Care Plan' , a period during which the customer will have a vehicle warranty, maintenance, roadside assistance, courtesy car and over-the-air mapping and software updates, as revealed by the company without offering for now more details.

Now yes, BMW, Audi, Mercedes, Porsche or Tesla have a new rival for the luxury segment that will undoubtedly fuel the war from next summer.