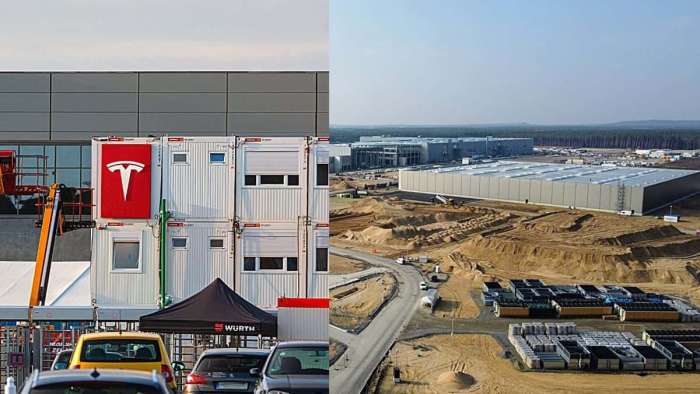 In Brandenburg, Tesla can rely on the infrastructure that has been created for the carmaker, and that it does not have to pay for itself. The Federal Ministry of Economics wants to promote the production of batteries itself.
Advertisement

German Federal Minister of Economics Peter Altmaier (CDU) wants to support Tesla's planned battery factory in Grünheide. "We are ready to support this investment from the state, as is the case with other companies that invest in this area," Altmaier said on Friday. The factory is classified as an "Important Project of Common European Interest," or IPCEI for short. IPCEI projects are financed from a funding pool set up by twelve EU members. They want to spend up to 2.9 billion euros to keep the most important part of the value chain for electric cars in Europe: battery production. On the website of the Ministry of Economic Affairs it says:

"The heart of every battery is the battery cell, which also accounts for most of the added value. In the case of electric cars, this is up to 40 percent. For the future of electromobility in this country, the establishment of battery cell production in Germany and Europe is an important economic and industrial policy theme."

The Ministry estimates the market potential for "Made in Europe" car batteries at 250 billion euros by the middle of the next decade. However, Tesla has to share the money with other companies. The Ministry of Economic Affairs supports eleven major projects, including those from: ACI Systems, Alumina Systems, BMW, Cellforce Group, Elring Klinger, Liofit, Manz, Northvolt, SGL Carbon, Skeleton Technologies and Tesla. A total of 46 companies and research institutions from twelve EU countries are involved.

The companies have to bear the majority of the planned battery investments. They have to raise around nine billion euros in their own resources. With a view to Tesla, Altmaier said that he expected the implementation of the project "to have as few bureaucratic obstacles as possible and as few delays as possible." However, all "stipulated deadlines set by law and statute" must be adhered to.

With these words Altmaier probably alluded to a letter that Tesla had recently sent to the Berlin-Brandenburg Higher Administrative Court. The electric carmaker commented on a procedure between Deutsche Umwelthilfe (DUH) and the federal government. In the letter, Tesla complained that 16 months after the application there was still no schedule for a final building permit for the Giga Berlin electric car factory. Projects that fight climate change would be placed on a par with those that accelerated it, according to the company.

Altmaier, on the other hand, emphasized: "In the past few months we have been able to clear up problems more than once even on short official channels." And he was convinced that this could also be the case in the future.

Christian Görke (Die Linke), former finance minister of Brandenburg, was outraged by the carmaker's criticism. On his Facebook page he wrote: "As long as Tesla itself does not manage to pay its bills for water or early approval of construction operations in due time and had to be repeatedly reminded, the company should withhold itself with general criticism of German planning and approval processes."

There are good reasons for the delays: Tesla has repeatedly changed Giga Berlin's plans itself; in addition, citizens and environmental associations have the right to have their objections examined. The business magazine Business Insider reported on Monday that Tesla founder Elon Musk wanted to use the letter to make a scapegoat in the event that the announced date for the start of production could not be kept. A lot of work would have to be done on the construction site: sewage, electricity and water pipes would still have to be laid. This indicates that the start of production in Grünheide will have to be postponed.

There are problems not only directly on the site, but also with the construction of the central sewer pipe, The Tagesspiegel reported on this in mid-March. Accordingly, a five-kilometer sewer pipe must be built from the Giga Berlin plant to near Erkner. In the urban area, the underground is problematic because of contaminated sites, and both a motorway and a railway line have to be crossed underground. According to the report, that could hardly be done by July. No other investor in Brandenburg has ever been courted as much as Tesla, said left-wing politician Görke.

Tesla wants to make billions in profits in Grünheide, which would be impossible without public infrastructure - that is why the company should give something back to the general public: it should now contribute to the costs of the renovation of the public infrastructure, writes Bernd Müller in Heise Medien. He says "the state and the municipalities are launching a multi-million dollar investment program to adapt road and rail infrastructure, without which Tesla could never produce hundreds of thousands of cars there." Even the planned relocation of the Fangschleuse station because of the Tesla plant is expected to cost 50 million euros in taxpayers' money. In addition, there are subsidies for battery production.

Almost a year ago the Green League, a network with roots in the environmental and peace movement of the GDR, clearly contradicted Tesla's self-portrayal as a climate protection project. Not only because Tesla started clearing the previous forest area in Grünheide and created facts before receiving a building permit. Electric motors are not sustainable as long as the electricity mix is ​​not sustainable - and the exchange of 47 million combustion cars in Germany for 47 million e-cars is "not a traffic turnaround," explained the network. Instead, the era of motorized individual transport must come to an end - in large cities and "as quickly as possible in the country too".