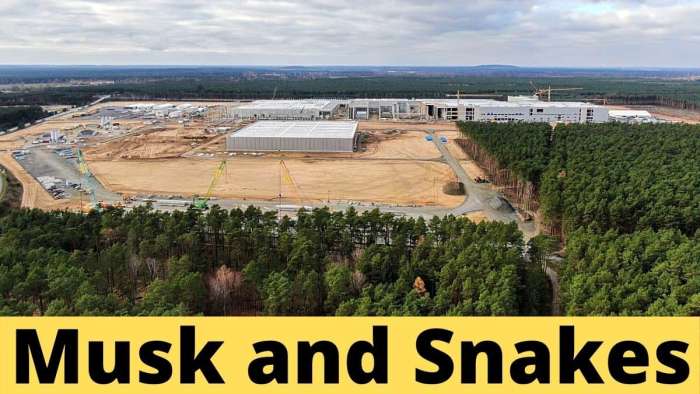 Elon Musk and The Snakes of Tesla Giga Berlin

Once again, the construction of the Tesla Giga Berlin was interrupted. There is a lot of forest, lizards, snakes - and the question of when the final building permit will come is still open.
Advertisement

"I believe in speed" is one of Elon Musk's favorite sayings. What this belief in speed actually means can be seen very well in Tobias Lindh's Youtube videos. Since Musk has been building his fourth Gigafactory in Grünheide near Berlin, people like Lindh, Jurgen and Albrecht, whom I have numerously quoted in my Youtube Channel, have been circling their drones over Giga Berlin, documenting the construction progress. The first Tesla models should be built here by the middle of next year at the latest.

But with the speed at which Tesla CEO Elon Musk is advancing in Germany, he repeatedly comes up against limits. Construction at Giga Berlin was interrupted again on Tuesday. Tesla was in the process of clearing a good 80 more hectares of pine forest when the administrative court in Frankfurt (Oder) stopped the work. The judges had granted the urgent application of two environmental associations, the NABU and the Green League because these organizations think Tesla shouldn't clear more forest without having Giga Berlin's final permit and also they are worried about the snakes and lizards who live in this forest.

"The purpose of the interim ruling is to enable an examination of the matter and not to let the application run into nothing with regard to the rapid progress of the clearing work", write the judges in their reasoning. In short: only a few days longer and the forest would have been gone.

Christiane Schröder from the regional association of NABU speaks of an "interim success". At first sight, the conservationists are interested in two endangered species, the sand lizard and the smooth snake. It normally takes up to two years to track down and move these animals. On the Tesla construction site, this should be achieved in two months. "That is completely impossible," says Schröder. A similar lawsuit by the Green League before the Berlin-Brandenburg Higher Administrative Court had already led to a brief clearing stop in the first 90 hectares of forest in February. A final decision by the court is expected these days.

In addition to worrying about the reptiles, the conservationists are also concerned with the entire course of the project. Tesla still does not have a final environmental building permit for its Giga Berlin factory. So far, Tesla has built the plant through provisional limited permits. This allowed Tesla to lay the foundations and pull up the first buildings, among other things. "If it is expected that the building permit will be granted, such exemptions are not uncommon in order to be able to advance the projects. However, the extent to which Tesla is working with it is quite unique. The clearing of the 80 additional hectares of forest is based on the seventh provisional permit," writes Jean Heidtmann in Sued Deutsche.

In the meantime Tesla is operating at its own risk. "It's a risk, yes. But hopefully we will get the final building permit very soon," Musk recently explained in a conversation with Springer boss Mathias Döpfner where also said Tesla is open to a merger with a rival carmaker. "I invest a lot of time fighting my way through the approval process." One of the biggest problems is still the water. The first expansion stage has now been taken care of. The factory will consume water as much as a city of 40,000 people. With the second and third expansion stage, however, this volume can more than double. Then the water would have to be obtained from other areas.

Wrestling with authorities has already messed up Tesla's ambitious schedule. Internally, the company complains about major delays and urges those involved in the project to hurry, writes Heidtmann. In addition, there is also Musk's plan to produce batteries on a large scale in Grünheide.

The final building permit for the Tesla Giga Berlin is currently expected by the end of December.

As soon as the environmental authority gives its "go," Tesla wants to get started. But now, Tesla critics welcome the clearing stop in Grünheide.