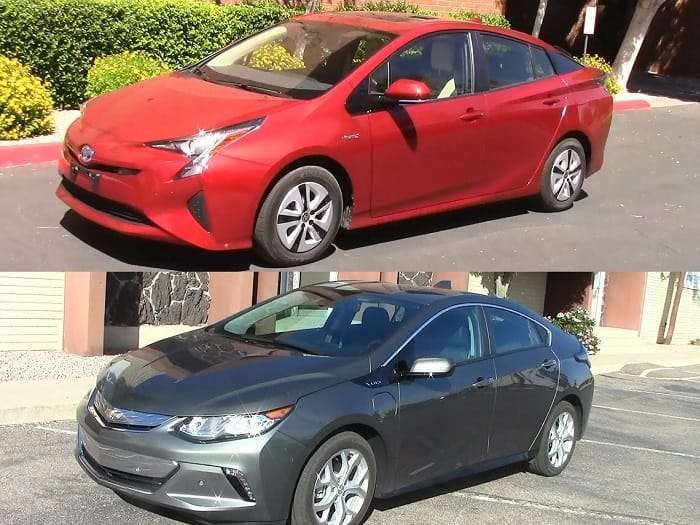 Chevy Volt and Bolt Are Great Cars, but Why Prius Outsells Them

In this story Chevy Volt and Bolt owners tell why Toyota Prius outsells Chevy Bolt and Volt. There are several objective reasons for that and GM must do something about them.
Advertisement

"I loved my Toyota Prius. When the Chevy Volt came out I thought I though this was a great car: so much more solid feeling, a lot peppier, and all electric for over 40 miles! I was so excited when the Bolt came out that I drove 3 hours to get one in another state because I was so anxious to drive all electric. Yet, the Prius still outsells the Volt and Bolt hugely. I can't figure out why. Can you?" asks a user named Grosvie Robinson Cooley in GM Electric Vehicle Owners group on Facebook.

Volt and Bolt owners in this GM group talk about reliability and price as deciding factors. They say people trust Toyota more than GM.

They also say Price point is a big advantage for Prius. People want cheap reliable cars. In some parts of the country the Prius is much more economical to drive. If you check online, the MSRP of Toyota Prius starts from $23,475, while Chevy Bolt starts from $36,620.

GM makes more money from selling Corvettes and Camaros and Chevy Bolts. GM does not push electric vehicles. Few weeks ago I went to a local GM dealership and saw only two Bolts. One was already sold out. The sales manager told me they are making more money selling Corvettes than Bolts. Their ICE vehicles make them more profit on sale and lifetime of the vehicle. Perhaps, this is why they killed the EV1.

I mean look around. There is absolutely no serious marketing of the Volt or the Bolt. It is only when you happen to drive one that you discover the beauty of these cars. Hence more people are in the dark about GM's electric cars. A friend of mine, a college business professor drives his Volt already more than 5 years and is most pleased with the experience.

Have you ever seen a Volt or Bolt commercial?

On the other hand, we can say that Toyota makes money off of Prius. Toyota Prius is profitable. While, GM needs to learn how to make more money from its electric cars.

Brand loyalty is a big factor too. Some people say that the number one and number two reasons people choose a car are Expected Reliability and Familiarity with Brand. Also, Toyota has spent decades cultivating its image as the leader in "green" cars.

I am a Toyota Prius owner myself. And I can say that the Prius owners are among the most loyal customers out there. A high percentage of new buyers are replacing their old Prius because like myself, I have been most pleased with my Prius. Their mileages are improving and some going electric as well. Prius owners have had a good experience with the old car, so a new one is a safe bet.

The only bright spot in this story is what I learned about our past contributor Buzz Smith who wrote this story discussing that Electric Vehicles require a new way to sell. In fact, one GM dealership hired him to specifically sell EVs. I don't know many other dealerships who have hired special sales managers to specialize in EV sales and promotions.

What do you think about this issue? Do you have other reasons why Toyota sells more Prius vehicles than GM sells Volt and Bolt vehicles? Please, let us know your thoughts in the comments section below.

Michael wrote on February 6, 2018 - 10:37pm Permalink
Because in 10 years, the Prius will still be a running, driving car, and there's no indication that this will be true for the Chevy Volt or Bolt. GM has made disposable compact cars for as long as they've made compact cars, Vega, Chevette, Cavalier, Aveo, need I go on?
Craig DeForest wrote on February 7, 2018 - 11:24am Permalink
Michael, that ("in 10 years the Prius will still be a running, driving car, and there's no indication that this will be true for the Chevy Volt or Bolt.") was true for the early model years of the Prius as well. People used to wring their hands over the Prius battery lifetime and how much it might cost to replace the Prius traction battery. When I bought a first-year Prius, folks told me point-blank to start saving up for my new battery at 100k miles, because it would certainly run me $8k or more! Well, when I *did* need a new battery I bought a refurbished one from Dorman for under $1k - it turned out to be well within the range of normal car repairs. Is there any reason to think differently about BEVs? The cost curve for the batteries is falling so steeply, there's no reason to think that they'll be any more expensive than any other car when they reach midlife.
Austin wrote on February 6, 2018 - 10:48pm Permalink
A lot of people I know think because it's a Toyota, it's guaranteed to be a daily driver. When it comes to GM you either got a good one or a bad one it seems. I had a 2008 basic Impala that was indestructible and gave me ZERO issues. I upgraded to a 2011 Impala with every option with the same drivetrain. The 2011 has been a constant headache.
Dino wrote on February 6, 2018 - 10:55pm Permalink
Here are two updates I would like to see in a Toyota Prius. Make the duplicate key fob cheaper and would like to see an auto auto-open hatch.
John Falk wrote on February 7, 2018 - 3:07pm Permalink
GM is committed to electric cars. The cost for batteries is dropping. They will be promoting them and selling them. In case readers aren’t aware there is a man who owns a 2011 Volt with over 400,000 miles. . I have owned mine since may. I have put about 25,000 miles on it due to a long commute that is temporary. The Volt is an excellent car and I have not had a single problem with it. I will never go back to an ice car. I will always drive a voltec drivetrain in a Volt a equinox whichever. Or a bolt. These 2 cars are better performing cars than the prius. You get what you pay for
David Vanderboegh wrote on February 7, 2018 - 9:27pm Permalink
I've owned only Hondas since '86, they are super reliable. I loved the concept of the Volt, so after some research I took one for a test drive. I knew in the first few minutes of that drive that I would buy one. My '13 Gen 1 has been totally reliable. Rock solid highway car, a blast to drive and much quicker than a Prius. Sterling safety record. I drive it mostly electric, averaging over 500 mpg. The Volt has developed a solid reputation for reliability, I plan to keep mine for a good many years yet. As far as I am concerned, the only real competition for the Volt is the new Honda Clarity PHEV, but it would take me a lot to get me out of a Volt. Test drive one, talk to an owner. GM did this one right.
Paul Pinella wrote on February 8, 2018 - 8:19am Permalink
I suspect good old resale value has a lot to do with it. We will have to see how well the Bolt does here. But the Volt, unfortunately, has not done well in this department.
G Cooley wrote on February 14, 2018 - 9:55am Permalink
I am annoyed to have been misquoted. Here is what I actually said: I loved my Prius, When the Volt came out I thought I'd died and gone to heaven. So much more solid feeling, a lot peppier, and all electric for over 40 miles! I was so excited when the Bolt came out that I drove 3 hours to get one in another state because I was so anxious to drive all electric. Yet, the Prius still outsells the Volt and Bolt hugely. I can't figure out why. Can you?
Douglas Peng wrote on February 14, 2018 - 11:58pm Permalink
I own a Gen 2 Chevy Volt and absolutely love it. Although it's a far better car than the Prius, it will never outsell it because GM is a pathetically managed company. Instead of seeing the Volt as a technology winner (which it is), GM sees it as CAFE offset so that it can sell more gas guzzling SUVs and pick up trucks. GM couldn't care less about its Volt sales, and it shows. There is no advertising, discounts, or even customer satisfaction feedback.