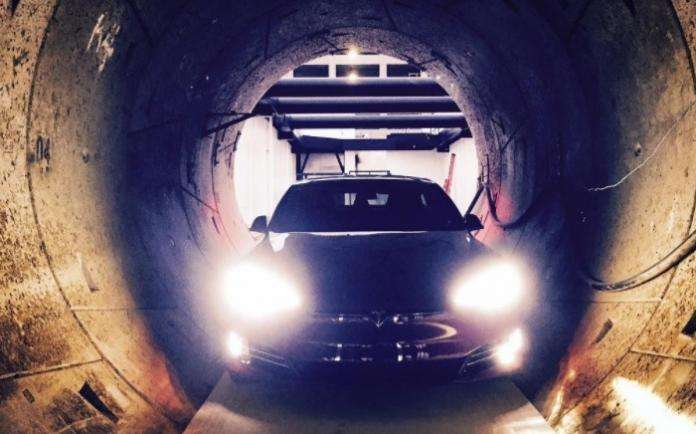 Sunday evening Tesla CEO Elon Musk shared an image of Tesla Model S in the company tunnel being dug under Los Angeles, starting in Hawthorne, CA. It immediately raised 3 questions among those who follow Tesla and hope to use the hyperloop one day soon. Watch the video inside too.
Advertisement

I don't know what the Tesla Company Tunnel is, but assume it's Tesla's testing tool for the hyperloop tunnel. Since Musk said in his Instagram message that the tunnel starts at Hawthorne, which is near Los Angeles, I wondered how far is Fremont from Hawthorne. Fremont, CA, is of course Tesla's headquarters.

Google shows that Fremont is 371 miles away from Hawthorne and on average it takes 5 hours 23 minutes to get to Fremont from Hawthorne. Is it fair to assume that soon there will be another hyperloop between Los Angeles and San Franciso, starting in Hawthorne? I say another, because in July Elon Musk tweeted that he has a green light to build a hyperloop between New York and Washington D.C.

Seeing a Tesla Model S already in the tunnel, is so amazing. It's like it was yesterday when Tesla announced the idea. Tesla shows that they announce about doing a thing and then proceed to do it. But doesn't it take civil engineering firms a massive amount of time and resources to plan and then dig a tunnel like this? How could Tesla achieve it in such a short period of time?

Judging from the picture, it looks like cars go on top of a sled that is at least the middle of the height of the Model S. Some people say it should only be big enough to barely fit the largest "normal" van/suv/pickup. Any bigger is a huge waste of money. What do you think?

Here is what the hyperloop looks like in action.

[email protected] wrote on August 28, 2017 - 3:01pm Permalink
I would suspect that no combustion vehicles would be allowed. Toxic Gases. So, EVs only. There might be a delay getting on but for that trip 15 minutes would be acceptable. I have no idea how they will manage ingress and egress.

LG's New EV Battery Plant Is a Welcome News for Tesla
Tesla Giga Berlin's New Hurdle: It's Not Only the Gov't, but Now Tesla Itself
END_OF_DOCUMENT_TOKEN_TO_BE_REPLACED