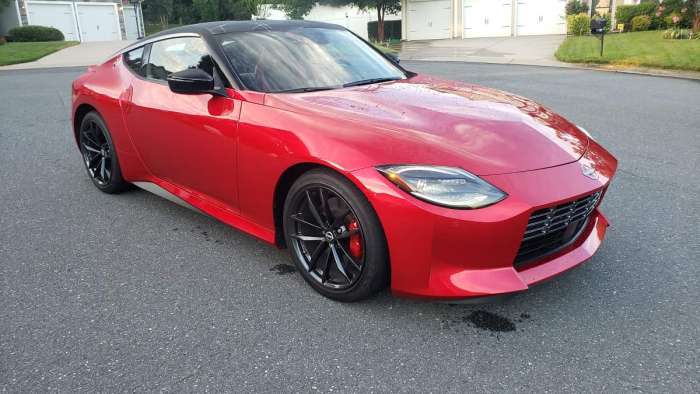 2023 Nissan Z Performance: Cheapest Way To Get Into The 400 Horsepower Club

Nissan's oldest nameplate the Z returns for 2023, and not only is it the cheapest way to get into the 400 horsepower club, but it's also one of the smartest way to do that. Nissan's unveiling of the seventh generation of the Z shows how much it respects its rich heritage. In this review of the 2023 Nissan Z Performance, we will see how the style, power and driving pleasure remain the cornerstones of this racing car.
Advertisement

Nissan is proposing a new generation of Z for 2023. It has the qualities of the six generations that preceded it.

Simply named Z, this descendant of the 370Z, whose life has stretched 11 years, brings a breath of fresh air to the sports component of the Japanese manufacturer. Its design bears witness to a desire for memory, with a marked inspiration from the 240Z for the front end. Its taillights in two lines refer rather to the 300ZX, produced from 1990 to 1996. This Z is otherwise identical in terms of dimensions to the 370Z, except for the length, which has increased by 12.5 cm in the transition.

As Torque News test-drove the 2023 Nissan Z and is reviewing it here, I would like to point to 4 things that may be of interest to you.

4 Things You Should Know About The 2023 Nissan Z

1. It's definitely not "brand new," but it's okay. Nissan has continued to build upon Z's heritage and the evolution continues over the years. refined into this new 2023 model. When I saw the 2023 Nissan Z, what struck me was how similar this 20-year-old model is to the last car.

The 2023 Nissan Z's wheelbase is the same. Its suspension is not so different. Its ergonomics inside are damn identical. Sure, the current Z has the obligatory touchscreen (a Z first, surprisingly), but its seats feel basically the same as the 2003 edition. Besides those elements, only the steering wheel that tilts and looks telescoping itself now makes the new model feel "new." 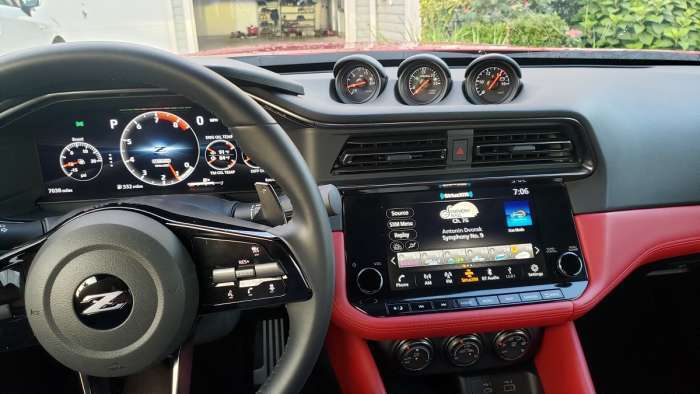 2. What's new is actually old: look at these new design elements. Nissan designers dug deep into the Z's past for the latest model. With its LED position lights on, its headlights take on the shape of the chrome surround of the original. Its long, slightly sloping hood roofline look fits the same mold as many of its predecessors. And perhaps most notably, its taillights nod to the 1990s 300ZX. If you want to feel really old, consider this: the 300ZX was unveiled 33 years ago. Yeah, it's vintage now.

3. 2023 Nissan Z was developed in the United States. As part of its normal vehicle development process, Nissan runs just about every global product at its expansive proving grounds south of Phoenix, Arizona. Normally, a model such as the Z would visit Phoenix from Japan at various prototype stages for testing to ensure it met the automaker's benchmarks. However, with the coronavirus plaguing the world in 2020 and 2021, Nissan couldn't affordably move prototypes between Japan and Arizona. Additionally, restrictions kept engineers stuck in their bases. Designing a car remotely only works to a certain extent; after all, those responsible for ensuring that the steering controls feel right need to actually drive the car. As a result, Nissan's engineering team in Arizona was tasked with developing one of the automaker's halo cars.

4. Performance trim is the level of performance. Nissan is offering three trim levels for the 2023 Z: Nissan Z Sport, Nissan Z Performance and Nissan Z Proto (LIMITED EDITION: Supplies limited to 240 units nationally). They feature the same engine, manual (or automatic) transmission, and rear-wheel drive-only configuration. A hundred dollars (or more) per horsepower sounds pretty appealing on paper since the base 2023 Nissan Z Sport costs $39,990 (or $41,015 with the mandatory $1,025 destination fee). If only it was the one to buy. The $51,015 Z Performance costs $10,000 more, but it brings essential features for anyone looking to unlock this sports car's track and twisty-road capabilities. A good old-fashioned mechanical limited-slip rear differential ensures optimal traction in tight corners. At the same time, the upgraded brakes inspire more confidence when you take advantage of all that power. Otherwise, the Performance adds 19-inch wheels that the Z doesn't really need, plus leather seats and a few other little bits. All models have an 8.0-inch touchscreen with Apple CarPlay and Android Auto, adaptive cruise control and a few other niceties we'd expect at this price. Maybe the limited-slip differential and big brakes will be standalone options next year. Who knows, will see, especially that the top Proto trim of the 2023 Nissan Z is Limited Edition only.

The Heritage of Z's Roofline
In profile, the Z has always been a model of proportion with a rather long hood and a very receding and very short roofline. Obviously, this approach sends the cabin closer to the rear axle. Just like the 370Z, as soon as you pass the windshield, the roofline collapses. It should be noted that the hood, the doors and the tailgate switch to aluminum to lighten the car.

The 2023 Z revisits its interior for the better. We enter the modern era with fully digital instrumentation with a 12.3-inch display similar to that found in other Nissan products.

Considering the vocation of the Z, Nissan has added a nice and sportier graphic design. The steering wheel adopts the same bead as the Nissan GT-R for a better grip. In addition, it incorporates a suite of buttons that allow the management of the instrumentation. At the top of the dashboard, an essential feature of the Z, the presence of 3 dials: the first for the turbo pressure, the second for the turbo speed and the third for the battery supply voltage. This last dial makes a reference to the car of the 1970s. 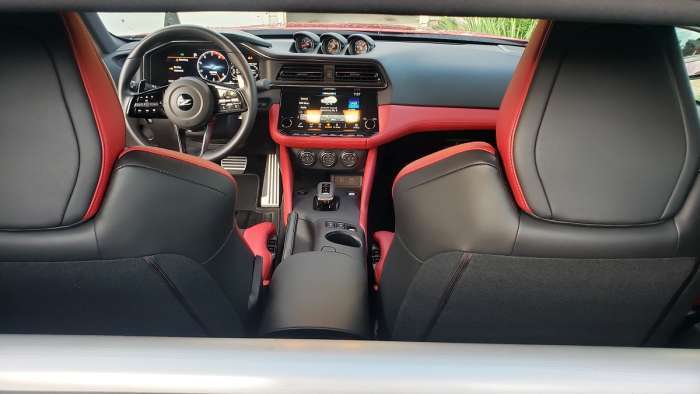 Just below, the air vents have a mesh giving a stylistic nod to the lights in their layout. As for the multimedia system, we get an 8-inch screen for all models. It is functional and well placed. The air conditioning controls are lower while remaining simple since they are knobs. 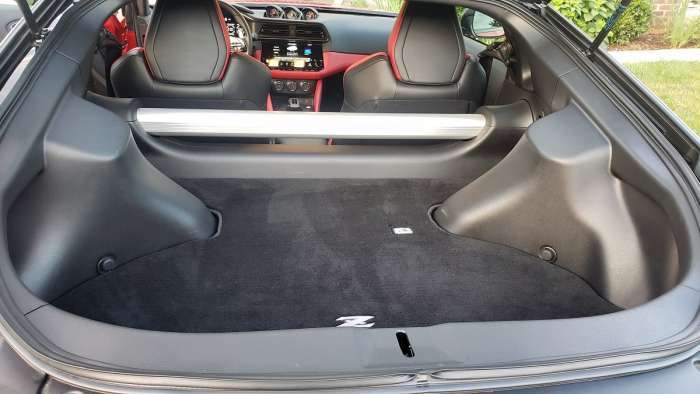 As we are in a sports car, storage is limited as much in the console as in the doors and the trunk, to 241 liters. 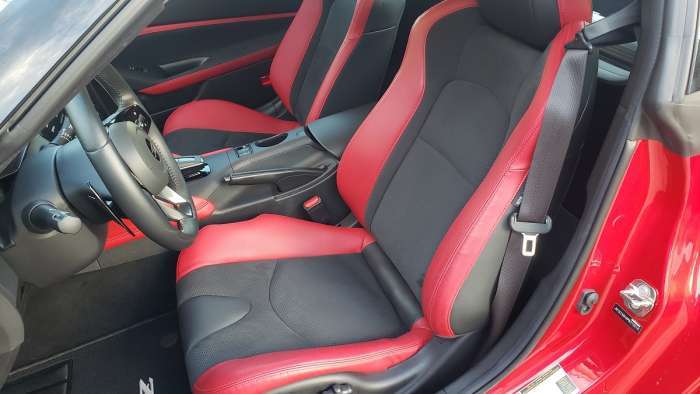 As for the seats, they offer good lumbar support, but the seats are very curved and also very short. Comfort seems relative to me. The quality of the interior finish has improved sharply, at least for the Performance and Proto versions. The Sport model abandons leather for fabric upholstery and more plastic.

The Driving Experience with the 2023 Nissan Z

On the road, the 2023 Z shines brightly. The steering offers good precision and allows us to be in communion with the car. In a daily driving context, the 9-speed automatic transmission and the 3.0-liter V6 engine do not lend themselves to criticism. While reviewing this sports car I felt great flexibility. 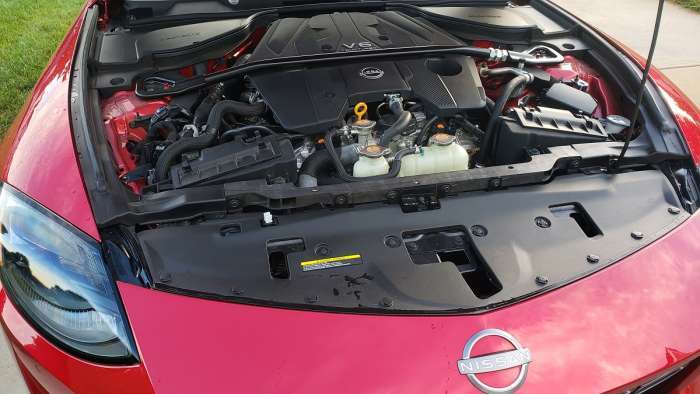 It has two driving modes: Standard and Sport. I didn't use the Sport mode for much except to increase the engine speeds for once or twice for the purpose of this review.

With more than 50 years of experience, the Nissan Z remains one of the strongest symbols of Japanese sports cars. Each of the previous six generations is significant in its own way, but for 2023, we are reclaiming a collection of elements from the past for a well-deserved tribute. 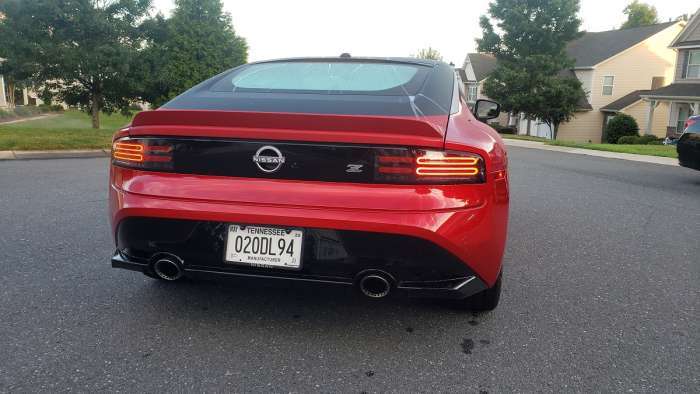 For many people sports cars are sports car. However, while reviewing the 2023 Nissan Z, I enjoyed driving it as a touring cars in public roads. The highlights for this car are the inspired design, healthy road behavior and how well the engine responds to the automatic transmission. One thing is certain: this car is a fine embodiment of what the guardian of a heritage as rich as that of the Nissan Z should be.