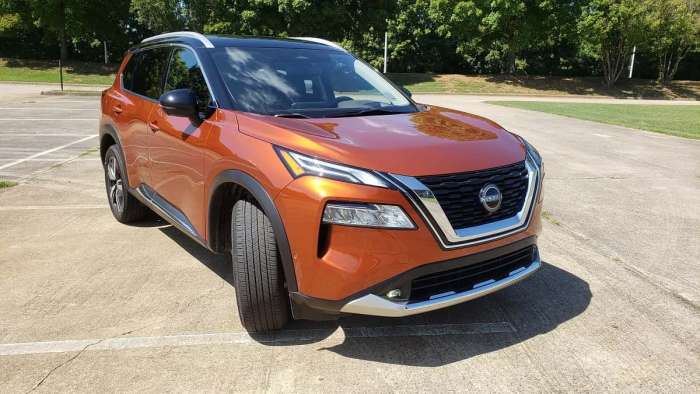 The Nissan Rogue got a handsome facelift in the 2021 model year. The 2022 model, which I had the opportunity to review, greatly impressed me. In fact, the 2022 Nissan Rogue Platinum rose to the rank of the best in its category, inviting itself into conversations with the Toyota RAV4 and Honda CR-V of this world.
Advertisement

The current generation of the Nissan Rogue is all new; it arrived last year, and we have to admit that Nissan struck a blow. The new Nissan Rogue is much more serious, its fundamentals have been completely revised, and it has everything it needs to fight with the most serious players in the segment, including the Mazda CX-5, Toyota RAV4 and Subaru forester. No need to bet on generous financial incentives to stimulate sales, its qualities are now sufficient.

Nissan created a major surprise by introducing a new 3-cylinder turbo engine with variable compression in its 2022 Rogue. Nissan Motor Company pioneered the variable compression engine with the introduction of the 2.0-liter VC-Turbo 4-cylinder in the 2019 INFINITI QX50 and the 2019 Nissan Altima. More than 20 years in development, the VC-Turbo system continuously adjusts its compression ratio to optimize power and efficiency through use of a breakthrough advanced multi-link system.

The central element of this 2022 Nissan Rogue is precisely this new 3-cylinder turbo engine. The latter delivers 201 horsepower and 225 lb-ft of torque, respective increases of 11% and 24% compared to the naturally aspirated unit. Admittedly, these statistics are frankly more aligned with the power standards of the category.

The engine is still paired with a continuously variable transmission (CVT), but it's been reworked for "better acceleration feel" and "increased fuel economy," according to the manufacturer. Mark.

In short, the new engine is more dynamic, but it consumes less; that's basically the mission of this new powertrain. Already, the consumer leaves winning. Even with the increased power, the 2022 Rogue's estimated fuel economy is 33 mpg combined, an increase of 3 mpg over the 2021 model. The Platinum grade combined MPG is 32 miles per gallon, with 29/36 city/highway respectively.

The 2022 Nissan Rogue comes in four main trims: S, SV, SL, Platinum. A new Midnight Edition package is available on the SV trim for 2023. The S trim starts at $28,655, while the Platinum trim of the 2022 Nissan Rogue FWD that Torque News reviewed, came with $40,825 MSRP with all options and Destination Charges.

Each of the 2022 Nissan Rogue's trims are available both in two-wheel and all-wheel drives. Torque News reviewed the two-wheel (FWD) drive version. The Platinum trim is offered with an available 108-inch head-up display.

Other specialties of the Platinum grade of the 2022 Nissan Rogue include the standard quilted semi-aniline leather-appointed seating, and things like the steering assist feel and detection performance when other vehicles cut into the lane. These are standard in the 2022 Rogue Platinum grade. Note also that in the Platinum version, Apple CarPlay and Android Auto are connected via Bluetooth; kudos to Nissan, as only certain luxury vehicles offer it at the moment.

The Rogue is for those who find the Qashqai a bit constraining and the Murano too big and/or aging. Within the brand, it largely dominates the other two in terms of sales. This vehicle is downright a centerpiece at Nissan, which could not miss its new redesign, because in this segment, the competition is tough - just think of Toyota's RAV4, which steals all the attention of the market, or almost.

Exterior Design of the 2022 Nissan Rogue

Its design gives it a much more upscale appearance. Its trapezoidal grille remains typical of Nissan products, and its headlights separated into two distinct blocks are part of the trend.

When it comes to styling, the 2022 Nissan Rogue isn't reinventing the wheel. In fact, Nissan has kept elements that are specific to the manufacturer such as the V-Motion grille. For example, we should mention the standard LED headlights on all versions, which are separate from the daytime running lights, or the optional two-tone paint, so that we can recognize the Hyundai Santa Fe or the Toyota RAV4 from certain angles. 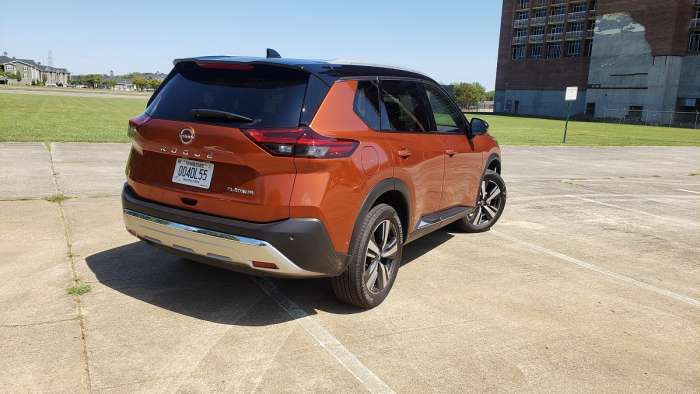 The rear portion, meanwhile, essentially takes the elements of the previous Rogue, with a touch of modernism. Raised tailgate, wider hips and textured bumper have been added for more distinction.

The whole remains pleasant in terms of style, and we feel that we are dealing with a resolutely more modern vehicle. The build quality on the outside has also taken a giant leap compared to the previous Rogue.

With the arrival of the new generation, the passenger compartment of the Nissan Rogue is now on the side of the most successful. This is undoubtedly the most marked improvement; not only is the quality effect superior, but the presentation and ergonomics are also flawless. The diamond-patterned leather seats in my test version looked great, but I would have liked to be able to lower the seat a little more than the settings allowed.

The sports steering wheel is stylish and provides good grip. The materials are soft at the contact points and provide a nice touch, as do the stitching on the seats and the dashboard. The infotainment system is simple and effective; I like the mix of digital and classic controls, especially in the case of the volume control. They are all user-friendly and fall well in hand.

There are several storage spaces under the console and in the doors; two large cupholders in the center console also allow you to anchor your smartphone if needed. Rear passengers enjoy a good degree of comfort; it is especially the space for the legs which remains remarkable. The vision is very good all around, especially due to a higher seat than in the front. 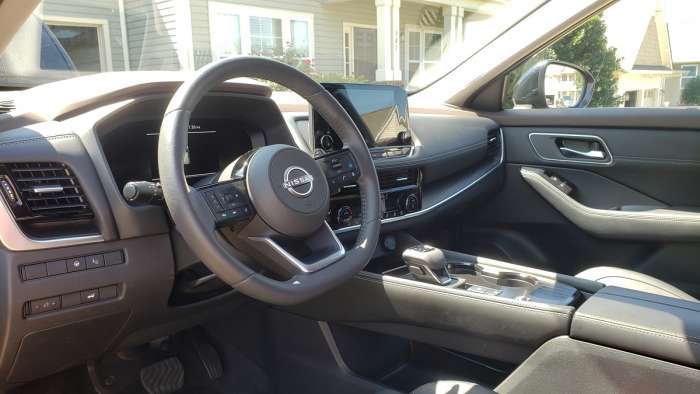 As the Rogue is a popular model for families, it is quite normal – and reassuring – to see the presence of the Nissan Safety Shield 360 suite of safety features, right from the entry level model. range. This includes Intelligent Emergency Braking with Pedestrian Detection, Blind Spot Alert, Rear Cross Traffic Alert, Lane Departure Alert, High Beam Assist and Auto Braking. rear smart emergency.

What's more, rear Seat Alert and Intelligent Driver Alert both come standard on all liveries. And since we are dealing with a Platinum livery, the ProPILOT Assist driver assistance system is also included in the long list of equipment, which includes intelligent cruise control with Navi-Link technology. 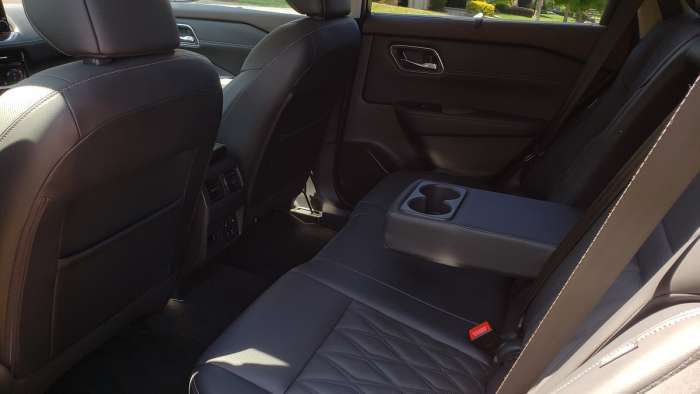 At the rear, the doors open almost at 90 degrees, which is very appreciable when you have young children, or if you have to load bulky objects. However, watch out for nearby vehicles.

The head-up display is also integrated into the dashboard, a detail that no longer forces the driver to lower his head to view the information screen behind the steering wheel.

Rogue has never been recognized for its sporty behavior. But now, with one less cylinder you will feel the gain in power from the first turns of the wheels. Rogue is faster at start. The elastic effect of the CVT box, on the other hand, is still present. In fact, this feature of the vehicle means that you let go of the right pedal more quickly… when the effect reaches its peak and you realize the speed reached.

The 2022 Nissan Rogue's 3-cylinder engine rumbles on the start up. Despite the gain under the hood, you still have to plan for overtaking on the highway, the gearbox which requires a good second and a half before finding the right engine speed to propel the vehicle forward. Nissan nevertheless integrated paddle shifters, even if there are no “speeds” in a continuously variable gearbox.

Usually, engines with an odd number of cylinders are not as balanced. When turned on, the engine actually seems to vibrate a little more when idling. You will not hear the effect on the road because Nissan's engineers did a great job of minimizing the inconvenience. Even the sound of the engine is interesting when accelerating, it is not similar to that of a mower, which is already good news. The extra horsepower from the engine is welcome, and the higher torque is present at lower revs, which is good news. 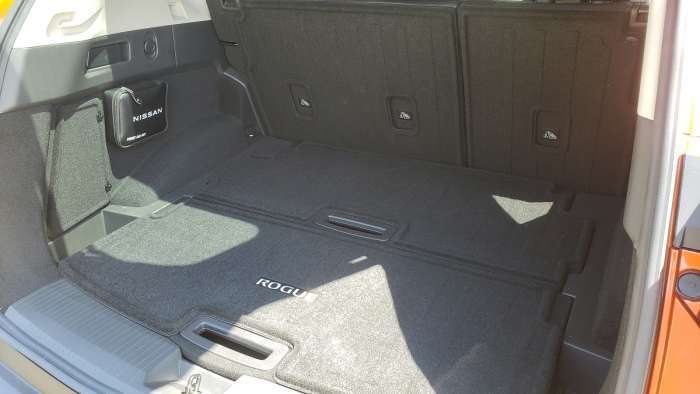 The firmer suspensions of this generation of Nissan Rogue provide greater poise, the grip of the steering wheel accentuates the effect of connection with the vehicle, and it remains more engaging to drive than in the past, without being as much as a Mazda CX-5. The wide footrest allowed me to anchor myself well.

The new Nissan Rogue improved greatly with the 2021 redesign. Technologically, it is very far from being the last in class. Even in the basic version, it benefits from the main security tools, an eight-inch screen and of course Apple Carplay and Android Auto. In fact, all that's missing is a hybrid (or plug-in hybrid) or electric version. Those who are looking for an electric Rogue, need to wait until Nissan starts delivering the Ariya, which I believe is coming by the end of the year.

Tesla Contemplates A New Strategy for China Retail even As Sales Boom
Jay Leno on Elon Musk & EVs: “I Think He Should Get ... Credit"
END_OF_DOCUMENT_TOKEN_TO_BE_REPLACED