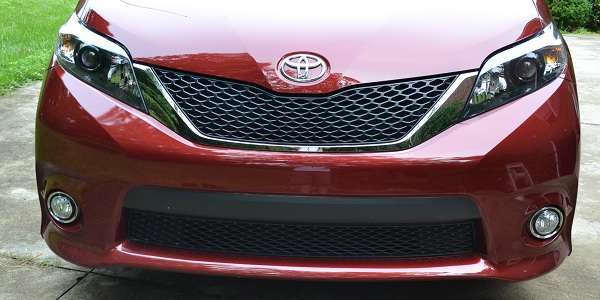 Last week I put my family of five into the 2014 Toyota Sienna and made two hour-long trips from Hickory, NC to Blowing Rock and then to Charlotte. We drove this family-friendly van through the beautiful scenery of Blue Ridge Parkway and then to a church on a Sunday morning in Charlotte. What follows is my impression.
Advertisement

I found the 2014 Toyota Sienna as a very practical family van for the money. In fact the average dealer estimated starting price is like 10 percent cheaper than the manufacturer’s suggested retail price. The starting MSRP is 33,860 dollars. As you upgrade and add features it will reach up to $39,898. In Hickory, NC, where I live and checked, the starting MSRP at the local Toyota dealership was $29,591. In fact, Edmunds.com also agrees that your estimated price promise at a local dealerships 10.3% below MSRP and calls it a “good price.”

If you are a parent who likes to go into family adventures, this minivan is your ally. We made a nice trip driving through the beautiful mountains of North Carolina, enjoying fresh air in the The Blue Ridge Parkway, noted for its scenic beauty and testing it through the streets of Charlotte.

Here are some of the basic specs of my Sienna.

In fact Nissan Quest and Mazda5 get a slightly better fuel economy if you want to compare. Mazda5 is smaller and Nissan Quest uses CVT (continuously variable transmission). According to Fueleconomy.com the annual fuel cost for the 2014 Toyota Sienna minivan is estimated at $2,500 and you will spend $1,000 more in fuel costs over five years compared to the average new vehicle. But then, this is a sizable minivan, full of space and comfort.

Sienna minivan comes in five models: L, LE, SE, XLE and Limited. While these five models are offered to meet unique needs of each family, they have one thing in common, the 3.5L V6 engine. While the vehicle is offered in FWD, buyers can also go with available AWD.

The minivan is loaded with technology. Let’s start with the kids in the second row. There is a cool Dual-View Entertainment Center with two 16.4-in LCD display screens on each side of the minivan. You can use them either in single-screen or split-screen mode. If two children or passengers want to watch two different things they can do so by one side playing a DVD from the built-in DVD play and the other side playing a different movie or a video game. The second game console or DVD player can be plugged into the nearby 120V AC power outlet. The system can be also controlled by a remote control. Having said this, I want to mention that I am one of those fathers who encourage their children to forget about video games when on a driving trip and enjoying the beautiful scenery. This is one of the rare times when city-children have a real chance to appreciate the mountains and nature in general.

Toyota has done a great job improving its Entune entertainment system over the year. The 2014 Sienna is available with Display Navigation1 and with Entune App Suite, which actually is a collection of popular mobile applications and services integrated with select Toyota vehicles. Number of apps in this suite are available subscription-free and delivered via most smartphones.

Here I am not going to even mention some standard features like Rear View cameras, Blind Spot Monitorin, Automatic High Beam feature and Dynamic Radar Cruise Control that come with the 2014 Sienna SE.

Sienna drives really well and the experience is very smooth. SE uses a sports-tuned suspension and 19 inch wheels, which provided improved handling and engaged driving experience all minivan drivers like.

The interior is spaceous and trimmed with carbonfiber-style accent. You get plenty of leg room and lots of cup-holders for the front-seat as well as back-seat passengers in the second and third row.

Exterior is also very stylish. Look how beautiful the rear is designed if you compare it with other minivans.

The 2014 Toyota Sienna is recipient of number of awards, including Best Bet by Cars.com, Most Dependable Minivan Four years in a Row by J.D. Power, 2014 KBB.com Best Resale Value Award and more. Overall Sienna provided a very pleasant driving experience. Both my wife and kids loved it, the sporty style, the comfort of the drive and the decent amount of the interior space.

Parks McCants wrote on September 16, 2014 - 11:33am Permalink
Not a bad read Armen. How was your fuel economy during this mixed-driving trip? Did you find the interior of the van to be quiet, did you like the road handling on curves. What changes would you make to Sienna if you could?
Bill wrote on September 18, 2014 - 1:19am Permalink
So you did a lot of advertising we can get from dealer site but not much about using it. Was the seat comfortable. Could you see out of the vehicle while backing up. Is the performance there. It is a sport after all.
Bill wrote on September 27, 2014 - 2:22am Permalink
I drove the standard van followed by the Tacoma recently. I was surprised at how tiny the front bucks felt. Kinda like a shoe to small feeling. Whereas the Tacoma seats felt loose like a recliner does. Do you think there is some targeted intent towards women drivers here. Remember the sienna is 78.1" wide vs the taco 74.2
RonaldbuM wrote on November 16, 2015 - 8:58pm Permalink
Organizations can compel their customers and employees to resolve disputes in arbitration proceedings bound not by state or federal law, but by religious edict.