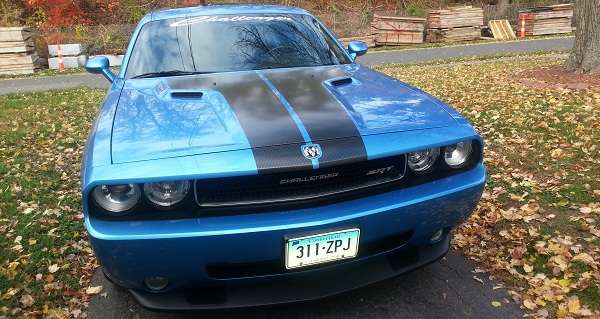 This car was my 55th birthday present to myself. 2011 and 12 were tough years as my ex-wife, whom I am still close to, was diagnosed with early onset Alzheimer's and her husband, also a good friend of mine, passed quickly from stage-4 pancreatic cancer. I had just received an insurance settlement from an auto accident and decided that it was time for me to do something for myself (with full support from my ex and our kids). My very first car was a 1971 Challenger and ever since they were released in 2008, I have lusted after them. This was my chance to own my dream car and to get into showing cars.

There were very few 2010 B5Blue SRT8s made. It was originally a 2009 color, but production was halted due to the bankruptcy. When production resumed with the 2010 models, Chrysler decided to use up the B5Blue color for the first half of the year 2010 R/T and SRTs (Spring Special). Only about 450 2010 B5Blue SRT8s were built.

I bought my Dodge Challenger on October 30, 2012. The day after Sandy hit the East Coast.

It was in pristine, showroom condition when I bought her. I replaced the exhaust with a MBRP cool duals catback, installed a hurst short throw shifter and a Diablosport tune to up the horsepower a little. I also changed the Mopar CAI to a C&L. I have dressed the engine compartment with polished stainless steel tank and abs brake controller covers, polished stainless engine half covers with blue HEMI inserts, a full blue Billet Tech engine dressup kit (Oil, washer, radiator and A/C input caps, fuse box cover, dip stick handle catch can and "beverage" delete covers) all engraved with SRT. Blue LED lighting will be installed this spring to accentuate it all. In the interior of this Challenger SRT8, I added Billet Tech blue accents - mirror bezel, door locks, cup holder accent and dash plaque with Old style Challenger script engraving. Also I installed Billet Tech visor covers in blue with SRT engraving and blue LED interior lights.

It has opened doors to a new world of friends through my car club, the internet and the track. Also, this Dodge Challenger SRT8 is my stress relief and my icon on how short life is. I suffered a heart attack on July 31, 2013 and the joy I get just sitting inside the car makes me feel young again. I have told my kids when I go, don't worry about a coffin because this is it! LOL

I am 56, have a beautiful 21 yr old daughter and a great 18 yr old son who just started college. I live in West Hartford, CT

I raced this car for the first time this past October and got bit by the racing bug BAD! On Saturday, January 18th, I drove the car to Cleveland, OH where she was worked on by Erik Storm of BFNY Performance. He will be shipping the engine to Andy Underwood of Performancewerks Racing in Muscle Shoals, AL who will be forging the engine. Andy is also supplying me with all new upgrades: race cam, ported heads and intake, new RAM clutch, DSS Aluminum driveshaft, DSS 1400hp axles and a new Fore Innovations fuel delivery system. Erik will reassemble the motor plus install a Procharger Stage 2 F1-A supercharger with a custom intercooler, upgraded rear clutchpacks, solid bushings and Lakewood shocks. Once all THAT is done, I will trailer the car to Pittsburgh, PA to have Mike Doban at OST tune the car for both the street and the strip. I will be looking at 800 - 1000 hp at the wheels when it is all said and done.

Life is short. Live it to the fullest.

Chris T. wrote on January 31, 2015 - 8:22pm Permalink
I know it's a year after this article but I happend on this while searching for hellcat B5 release dates (anyone know?). Anyhow- I'm the original owner of this B5 beauty. I know for several reasons but first and foremost: look at the placement of "Challenger" in the grill. I did that, it's not stock that way. I sold her due to divorce but as you can see from my reason for stumbling onto this article I have been lusting after B5 ever since! Glad to see she found a good home!
Rick Louis wrote on April 22, 2015 - 9:20am Permalink
Where did you get your information about 450 b5 srt8's being produced. I have one and have found so many different answers about the production numbers, none of which came from Dodge.
darrel farley wrote on October 21, 2017 - 10:15pm Permalink
i have a 2010 SRT b5blue challenger with 6000 miles how many 2010 b5blues were made ?
Michael Wayne P... wrote on April 9, 2018 - 7:51pm Permalink
I own a 2010 SRT B5Blue Challenger. I've had it for about 6 months now and have put 1300 miles on it so far (with no speeding tickets, yet!) This car is a thing of beauty, inside and out, however, underneath that amazing looking Carbon Fiber Factory hood lurks a sleeping monster that will roar to life with just a slight push on the throttle. It's the automobiles version of "Beauty and the Beast!"
Dean Convery wrote on July 25, 2020 - 2:44pm Permalink
I just bought a 2010 B5 blue SRT8 Challenger 6 Speed black interior, I think I'm in Love, ha,ha, it's also got a sunroof