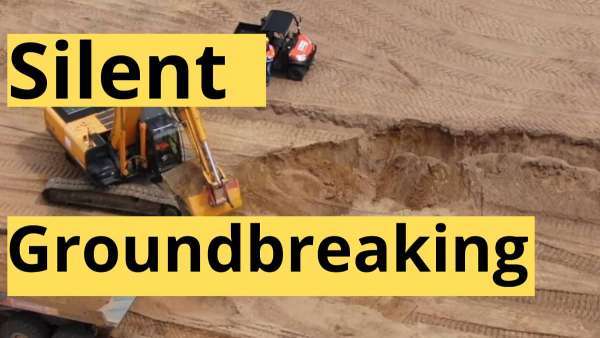 Why Is Tesla's Groundbreaking at Giga Berlin Silent

The hoped-for and promised party with CEO Elon Musk did not exist, there was no celebration and no announcement, and so far not even a final approval for the entire project. Nevertheless, according to the assessment of a knowledgeable observer of the events around the Tesla Gigafactory in Grünheide near Berlin, this Thursday things moved very fast and forward.

"I think that even without a groundbreaking ceremony, we can say that Tesla has now broken ground," wrote on Twitter @tobilindh and published a new drone video in which caterpillars and excavators dig a huge pit, probably for the first foundations. Others agreed with him.

Has the actual construction of the German Tesla factory actually just started, and hardly anyone got it right at first and Tesla said nothing about it? Both are possible because the Gigafactory events are closely monitored with drones and then discussed on Twitter, but without official information, it is not always clear. Tesla, on the other hand, communicates generally only selectively and through the CEO personally, and a trip from Musk to Berlin is currently hardly conceivable for pandemic reasons. He also currently is busy getting two astronauts into space with SpaceX and bringing them safely back to earth.

So the world will probably have to do without a Gigafactory building party with Musk for the time being, especially since the project as a whole has not yet been approved. This week, the Brandenburg Ministry of the Environment announced that Tesla could build flat foundations for some buildings, pipelines, columns, and construction pits. Like two previous permits for clearing and leveling the site, this also only applies subject to the outstanding overall approval of the Tesla project.

Apparently this is not going smoothly either because Tesla belatedly that it needs pile foundations for the sandy soil. For this reason, Tesla prepared pile tests, but because it partly happened before the necessary permission has been granted, Tesla is now being fined for this. It looks like Tesla may have hammered those 19 piles into the ground without proper permission.

All of this may not be the best environment for a Giga Berlin Groundbreaking party, but Tesla is clearly not discouraged from working. At the beginning of the week, a large number of heavy construction machines were ready, according to observers, for an impending start. And after the permit came from the state, the Tesla teams lost no time on Thursday. Large excavators shoveled soft, already leveled soil away in trucks, creating a long, shallow pit. Elsewhere construction roads were further fortified.

So there is no groundbreaking in the sight, at least not in the narrower sense of this world. But excavation is going, road construction is moving forward the work is being done where part of the Gigafactory main building will soon be.

Here is the next step for Tesla at Giga Berlin's EV factory construction.

Tesla-Funded Research Reveals One of The Biggest Mysteries of EV Battery
Tesla Tesla Buyer Nets a Whopping $12,000 Discount After Asking for Reduction
END_OF_DOCUMENT_TOKEN_TO_BE_REPLACED