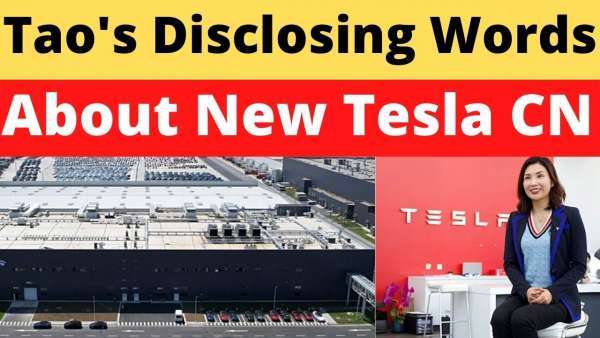 Tesla's Tao Makes 2 Important Points About Future of Tesla China. Despite having the Model 3, Tesla’s vehicles still appeal to more affluent demographics. But China has plenty of competition at lower prices on the market. A much-cheaper Tesla model in China could open up new classes of electric car buyers. And Grace Tao of Tesla China yesterday gave two interesting signals about the future of Tesla China: namely its localization of supply and production of a new affordable Tesla model, costing around $25,000.

CnEVPost reported on this signal on Monday and the signal was provided by Grace Tao on the sidelines of a trade fair in Shanghai, who, according to her LinkedIn profile, is responsible for public relations and government work at Tesla in China. According to CnEVPost, in the near future, Teslas produced in the China would consist of almost 100 percent locally sourced parts. And her second point was that, there might also be Tesla models there that are "completely developed and produced by Chinese teams.”

"Hopefully, in the near future, not only will China-made (Tesla) models allow for nearly 100 percent locally sourced parts, but perhaps we will also see (Tesla) models designed and manufactured entirely by Chinese teams on Chinese roads," said Grace Tao, vice president of Tesla.

Tao mentioned this in an interview with the local media outlet thepaper.cn during the ongoing 4th China Import Expo.

Tesla Giga Berlin's New Hurdle: It's Not Only the Gov't, but Now Tesla Itself
Teslas Are Sold Out Until 2023, But The Timing May Reverse
END_OF_DOCUMENT_TOKEN_TO_BE_REPLACED