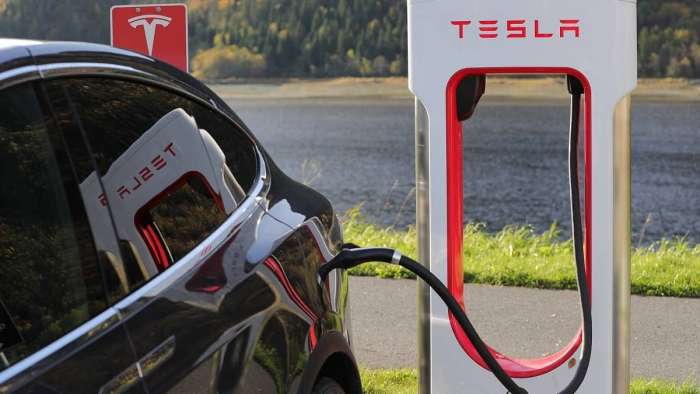 Tesla Bearish Outlook From Trump and His Advisors

A recent video that was taken in secret has bubbled up. In the video, Trump and his advisors are having dinner and discuss an array of topics over the course of an 83 minute video. At about minute 58, they begin to discuss the future of transportation. They spread fear, uncertainty, and doubt regarding Tesla and the future of EVs.
Advertisement

A presidential traitor, decided to secretly film a dinner meeting between Trump and his advisors. They discuss an array of topics and go in depth about each subject. Trump asks questions based on what his advisors are telling him and they enter a conversation about transportation.

A CNG advocate, which is also one of Trump’s advisors begins going on and on about how electric vehicles are a failure for the future and that they will not be successful. He details how he believes that CNG is way more efficient and discusses how EV’s carbon footprint is way worse than anything that a CNG produces. For those who don’t know, CNG stands for compressed natural gas which is used as an alternative fuel sources for many cars on the road. In the video, they discuss how CNG is far superior to EV and discuss how it could be used for semi trucks.

They go on to talk about Tesla, and talk about how Tesla is 100% broke even though they had two back to back profit producing quarters in 2018 for a total of 4, and are geared up for greatness for Q4 earnings this year. They discuss how the EV tax credit is ending, and that the Model 3 has had some issues being produced. They speak candidly, and without sources, kinda like I do! The difference between me and them is that I am but a mere opinion writer. They, however, are advisors for the PRESIDENT. There is a big difference and they should be speaking with truth, especially when it comes to advising Trump.

Tesla is the pioneer for EVs and Trump's advisors claim that other automakers “are catching up to him.” This may be true, and I expect other manufacturers to stay competitive and produce something that is up to par both technologically and efficiency wise, but nobody can deny Tesla for who they are. They have produced an amazing product and are on their way to sustainable profit. Some of Trump’s advisors go on to say that “[Tesla] is subsidized 25,000 per vehicle. It’s over.” This has many implications but the question is, is it true? Sources, Teslarati’s Simon Alvarez claims that the total subsidy tops out at $7,500.

I’m sure that this video being released will cause tons of problems across multiple industries. One thing that’s for sure, it will disrupt the transportation industry. Their discussions over CNG vehicles being superior to EV is a topic for a different day, but what shocks me the most is that Trump, famous for being a businessman, doesn’t see the potential in this business. Not only for driving, but the industry that is within the EV era.

This week is Tesla earnings week. Here’s to the future.

DeanMcManis wrote on January 27, 2020 - 12:14pm Permalink
It is actually a reasonable discussion about fuel and energy use, and is probably typical of other closed door discussions between power brokers, each trying to serve their own interests best. Petroleum makes trillions of dollars, so having the president's ear on future energy issues is very lucrative. With this discussion being in 2018, there were very active campaigns devised by the petroleum industry, competitors, and Tesla stock short sellers to discredit Tesla, spread rumors of the company's pending failure, and to spread doubt about the future of electric vehicles in general. Plus of course actively supporting and promoting fossil fuels, which still completely dominate the transportation sector. CNG (compressed natural gas) is relatively clean, and across the country it has been replacing coal as the main source of electricity production. This has been facilitated mostly by the increase in fracking and subsequent reduction in CNG fuel cost. Most homes in California are heated using CNG, and nearly half of California's electricity is coming from CNG power plants today. So in that way, the oil companies are still winning with electrical cars, because much of the electricity is coming from CNG in the end. Of course renewable power is growing, and in CA it accounts for nearly 1/3rd of our electricity, but a lot of CA power is still imported from out of state. For vehicles, CNG is cleaner than gasoline, and of course diesel, but it has to be stored in pressurized tanks, and it contains less energy than gas, so the mileage is notably lower. Even with renewable energy sources available, solar only provides electricity during the day, and wind and wave power generation are periodic and variable as well, with batteries only able to cover a small part of the needed energy storage during off generation times. The upshot is that these kinds of closed doors conversations have gone on forever, and rich and powerful people will always work to become richer and more powerful. But overall progress is still being made to produce cleaner, renewable energy, and the move towards electric vehicles is really starting to gather momentum now, despite interference from oil interests.