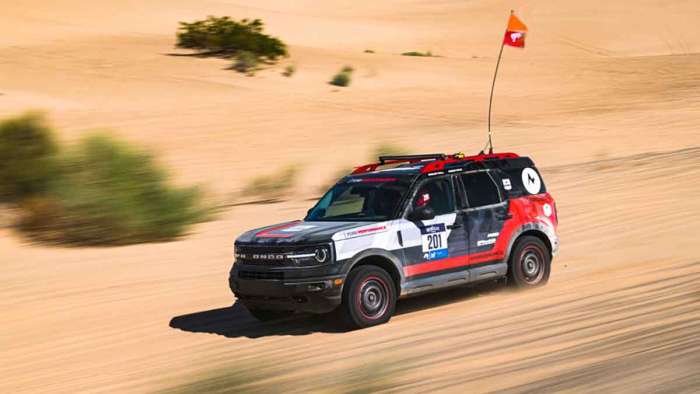 Have you heard about the Rebelle Rally? I had several automotive journalist friends who were chosen to be part of various manufacturers’ racing team. What an experience it would be. Talk about fun and a bucket list type of event.

It’s not Baja, but it’s close.

The Rebelle Rally is now in its fifth year and it’s an all-female, week-long trek through the Nevada and California desert. The teams drive various 4x4 vehicles (non ATVs) over 1,200 miles without using electronic GPS products, relying solely on old-fashioned compass and map navigations. Usually a team is consisted of a driver and a navigator, although some teams rotate spots. There are checkpoints throughout that the teams must get to in order to earn points.

This year marked the fifth running of the Rebelle Rally, an all-women off-road event that begins near Lake Tahoe in Nevada and ends at Imperial Sand Dunes in California. The event is designed to blend serious off-road competition with the ultimate road trip.

There were even some classic off-road vehicles represented like older Jeep Wranglers and Rubicons and a 1992 Mercedes-Benz 350 D-Class. The oldest vehicle was a 1969 Ford Bronco.

This was the first time the Bronco Sport competed, since this is the first year for this all-road crossover from Ford. It’s all part of the looming Ford vs. Jeep “war” that’s coming with Ford re-engaging in the off-road segment with three variants of the Bronco. 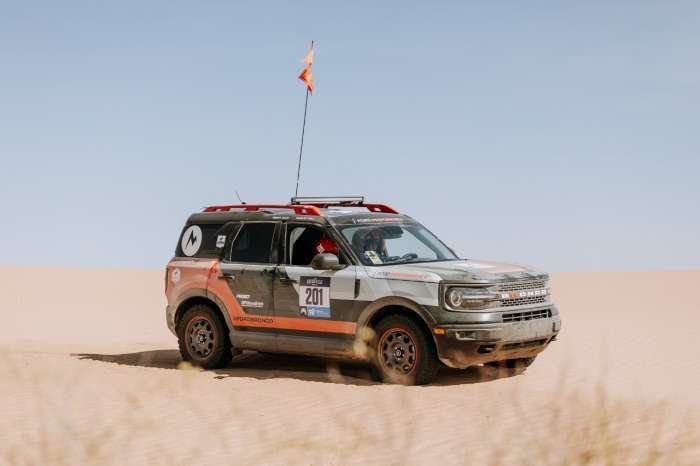 Ford Bronco Sport Teams At Rebelle Rally
Professional driver Shelby Hall and experienced navigator Penny Dale guided the all-new Bronco Sport, on sale later this year, to a win at the prestigious Rebelle Rally. They were entered in as Team G.O.A.T, which is an homage to Ford’s new crawl mode feature in the Bronco known as GOAT (Go Over Any Terrain).

Hall and Dale won first place in the X-Cross class at the event, a grueling week-long adventure that requires contestants to cover 1,200 miles of Nevada and California desert terrain. In lieu of electronic GPS mapping, teams rely on old-school compass-and-map navigation to reach designated checkpoints along the way.

“Just finishing Rebelle is an impressive feat – we’re proud of all three Bronco Sport teams,” said Mark Grueber, Bronco brand marketing manager. “The results really underscore that Bronco Sport delivers, both for seasoned pros and off-road novices. All of these women embody what Built Wild stands for, and the first-place finish by Shelby and Penny helps establish this all-new vehicle as the Bronco of small SUVs.” 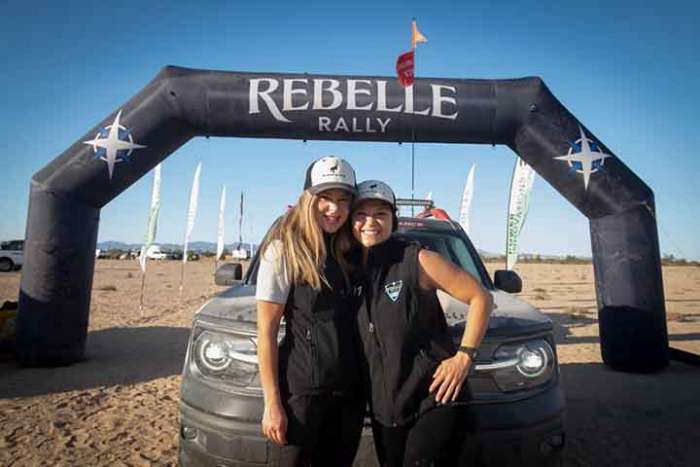 Team G.O.A.T
The eventual winners in the X-Cross class have vast experience, according to their bio on the Rebelle Rally website.

As seasoned off-road veterans, and having competed at previous Rebelle rallies, both Hall (driver) and Dale (navigator) have the most experience of the three Ford teams to put the Bronco Sport through its paces.

Hall’s off-road experience includes racing side-by-sides, as well as her grandfather’s legendary first-generation Bronco – the only production vehicle to ever win the Baja 1000 overall. Last November, the Reno, Nevada resident took the wheel of the Bronco R race prototype at the 2019 Baja 1000, honoring the 50th anniversary of her grandfather’s still-never-repeated record win.

Riding with her in the navigator’s seat will be Dale, who has years of off-road driving experience and competed at last year’s Rebelle Rally. Dale, of Vancouver, British Columbia, once drove nearly 28,000 miles from Vancouver to Tierra del Fuego, Argentina. When she isn’t driving off-road, Dale is working at her interior design studio. 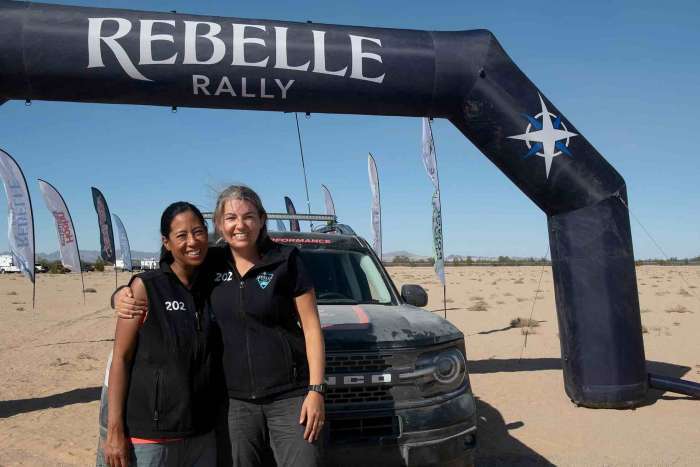 Team Fearless Fillies
According to their bios, this team was rather inexperienced.
Jovina and Erica met right after college at their first jobs in advertising at J. Walter Thompson. They worked together on ad campaigns for Ford F-Series pickup trucks for several years until their careers took them on different paths.

After going back to school, Jovina left automotive to work in the beer industry for MillerCoors in Chicago. She led marketing on iconic brands like Miller Lite, Coors Light, and Blue Moon Brewing Company.

Erica continued her career on the agency side, working at Leo Burnett on GM brands, Goodwrench and Buick. She also spent a few years in Toronto working for GM Canada. She ended up back at GTB as the account director on Ford Truck, where her dedication to the brand led to her securing a position on the marketing team at Ford.

Ten years after they first met, after marriages, three kids (two girls for Jovina, currently age two and six, and one girl for Erica, age five), and planting roots in Michigan, Jovina and Erica coincidently accepted roles within a month of each other at Ford Motor Company to work on the Bronco Family.

Neither Jovina, nor Erica had off-road experience prior to their roles, but their passion for Bronco, getting outdoors, and experiencing new things has led them to take on the Rebelle Rally together. They are pumped to be one of three teams competing in the all-new 2021 Bronco Sport and are excited to share their journey with anyone who is looking to take their first step into off-roading. 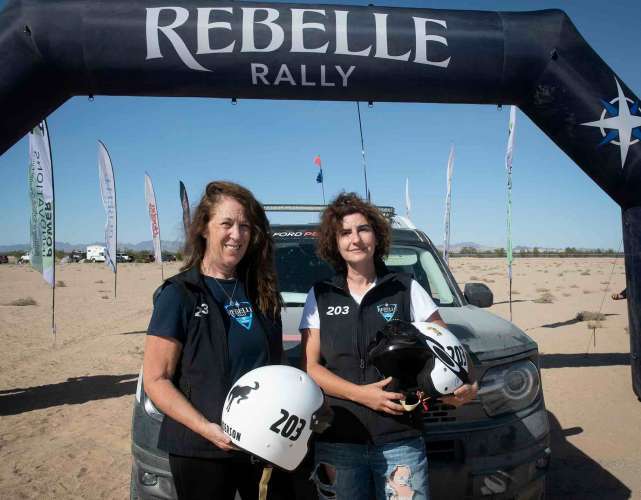 Team Horsepower
This team was a late entry for Ford, according to their bios.

Betsy Anderson has a long off-road career, more than twenty years racing in SCORE, NORRA rally, Sonora rally , AERC endurance, and Patagonia. Elana Scherr is an automotive journalist whose experience is mostly in getting lost. Both have wanted to do the Rebelle for years, but work and other racing has gotten in the way. This year, at the very last minute, an opportunity came up, and when opportunity knocks, ya gotta answer. 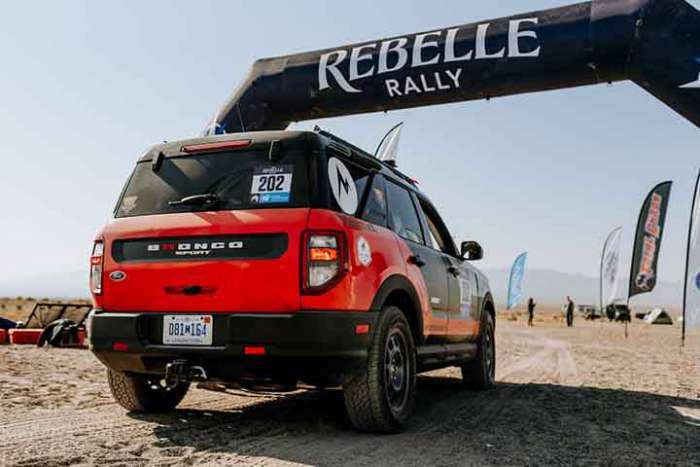 I want to give every single woman who competed in this competition a major shout out. I’ve had friends out there and I’m quite jealous of the experience. No matter where you finished, you did something you will remember for a lifetime.
As for Ford, the Bronco Sport represented itself well in this arena and is showing that the Sport can be taken just as seriously as the two-door and four-door Bronco will. I’d be willing to bet that next year Ford will enter the two-door and four-door Broncos, along with the Bronco Sport in this competition. Who knows, maybe they’ll even surprise everyone with a Warthog Bronco, wouldn’t that be something?