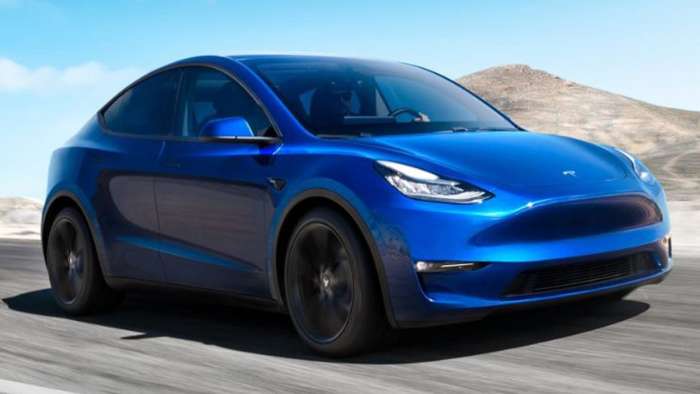 More electric SUVs, big, small and fast, are rolling out in 2020. What those, hoping for more electric vehicles, can look forward to in 2020. Here are 9 new EVs that should expand EV variety and availability for 2020.
Advertisement

As we roll into the new year, 2020 is shaping up to be the year it becomes easier to own an electric car.

If 2019 was the year of the electric car, the number of electric models available in dealerships nearly doubling, 2020 looks to double the number of new models on the road, and to expand available electric offerings to more popular and practical body styles.

Even though a handful of EVs have already been retired, such as the Ford Focus Electric, VW e-Golf, and now the Fiat 500e, they are being replaced by much larger models with longer-range batteries to compete with the most successful electric cars from Tesla.

Last year was mostly about adding luxury models to the mix, with new EVs from Audi, Jaguar, and Porsche—plus a few updates and expansions to existing models, such as the Kia Soul EV and its new Hyundai twin, the Kona Electric.

2020 is expected to bring up to 10 new models, focused on mid-sized SUVs. Among those most likely to make the biggest splash:

• The Tesla Model Y. A new mid-sized SUV from Tesla based on the popular Model 3, the Model Y may be the first vehicle to experience a relatively seamless launch that could bring steady profitability to ensure the company’s future. After experiencing engineering problems with its previous SUV, the Model X, and manufacturing problems, first with its original Model S and more troublingly with the Model 3, it may finally have learned the lessons of straightforward engineering and mass production with the Model Y. The Model Y also lands in a the most popular part of the market, as a smallish mid-sized SUV with a range of between 240 and 300 miles.

• The Ford Mustang Mach E. Think of the Mach E as the most direct competition yet for Tesla yet from an automaker with more than 100 years’ experience in mass production. Unlike compact, and relatively short-range electric cars from other automakers, the Mach E uses the lessons Tesla has taught the industry in offering compelling performance and styling in a car that happens to be electric. In size, function, range, and price, it’s a near ringer for the Model Y, more practical and affordable than the Model S or Porsche Taycan, with very little penalty in performance.

• BMW iX3. The iX3 is exactly what it sounds like: an all-electric version of the BMW’s most popular SUV. It is scheduled to go into production in China this year and be imported to the U.S. So far, BMW’s battery claims are modest: topping out at 200 miles. Those kinds of battery ranges in a luxury car have so far doomed sales of the Jaguar I-Pace and Audi e-Tron and delayed the U.S. introduction of the Mercedes-Benz EQC.

• Polestar 2 from Volvo. Volvo’s Chinese parent, Geely, is taking a somewhat more conservative approach to EV models, though it says it will offer an electric version of every car its builds. (This was supposed to start in 2019, but has been pushed back.) The Polestar 2 will be the brand’s first all-electric car, essentially an electric version of Volvo’s XC40 small luxury SUV. The company says it will have a range of about 275 miles on a charge, putting it a little short of the longest-range cars, but significantly higher than the E-Tron, I-Pace, or low-cost versions of the Model Y or Mach E.

• Chevrolet Bolt EUV. Chevrolet plans to complement its first all-electric car, the small Bolt hatchback, with a larger crossover, potentially with all-wheel drive. GM increased the range of the Bolt to 259 miles in August. The larger Bolt EUV, with the same battery pack, and built alongside the Bolt EV in Orion Township, Michigan, is likely to have a shorter range, but it may also be less expensive than larger, longer-range models such as Ford’s Mach E or the Tesla Model Y.

•Volkswagen ID4X. The car that was known in concept form as the ID Cross is expected to debut toward the end of 2020 as the ID4X. It will be the first U.S. model based the new ID electric-car architecture that Volkswagen plans to expand throughout its model lineup. The company says it will be offered with all-wheel drive and is aiming for a range of up to 300 miles. The smaller ID3 hatchback it will be based on has appeared in prototype form in Europe, but has been delayed by technical difficulties.

• Audi E-Tron Sportback The Sportback is a sleeker, more rakish, and slightly less roomy SUV based on Audi’s E-tron. As an upscale alternative, the company may be able to price it higher (or at least hold pricing and aim for higher sales), to spread its investment in the e-Tron electric SUV. It may even gain a few miles of range on the highway from sleeker aerodynamics.

• Tesla Roadster (II): On the expensive end of the scale, Tesla also plans to release its second generation Tesla Roadster, this time a high-performance coupe with a starting price of more than $250,000. The company has not announced where it will be built, but most of the model run will likely be sold to investors who have already put down deposits. The company claims a 500-mile range for the new Roadster, along with acceleration times from 0-60 mph in a Space-X-like 2.5 seconds.

These aren’t the only new models on drawing boards this year. Most notably, Tesla, Ford, GM, and startup automaker Rivian have all announced new all-electric pickups, but none of them will debut until at least the end of 2021, led by the promising Rivian R1T, projected to cost upwards of $70,000. Volkswagen has a whole EV lineup planned, including a new electric Microbus and possibly an electric dune-buggy, but only the ID4X and the Microbus are likely to make it to the U.S., and the Microbus isn’t scheduled to launch until 2023. Mercedes also plans several electric sedans and SUVs, including an electric luxury sedan called the EQS, but its first model, the EQC SUV has been delayed until 2021. And GM plans a new lineup of electric cars and trucks including a pickup, electric luxury models from Cadillac, and more SUVs, but none besides the Bolt EUV is expected to arrive before 2023.

Such a wide choice of practical EVs is likely to make it a lot easier for American families to choose an electric model for their next car.

DeanMcManis wrote on January 6, 2020 - 4:34pm Permalink
Nice write up. Regarding the BMW iX3, I don't think that a 200 mile range is necessarily a problem, depending on the price. The problem with the iPace and ETron was not their not-quite-Chevy-Bolt-level-range, it was the $75k-$90K pricetags, along with the middling range. I thing that the iX3 would be very competitive, even with a 200 mile EV range, if it were priced under $40K after incentives. Speaking of comparatively short EV range, Mazda might also be releasing their MX-30 EV crossover, with something under 130 miles of range. They have made a lot of excuses regarding their choice of using a relatively small battery, but like the new Mini Cooper EV, unless their price is low, their sales will also be low. Mostly because of all of the superior EV competition that you mentioned, along with several plug-in hybrid rivals like the Toyota RAV4 Prime, and 4xe Jeep models.

Tesla Contemplates A New Strategy for China Retail even As Sales Boom
Jay Leno on Elon Musk & EVs: “I Think He Should Get ... Credit"
END_OF_DOCUMENT_TOKEN_TO_BE_REPLACED