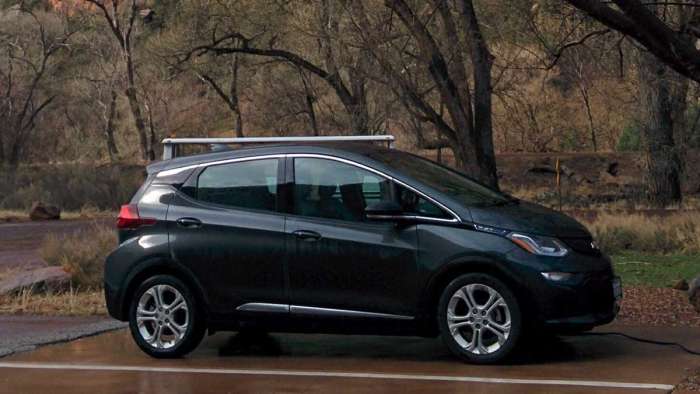 Do you own a Chevy Bolt EV and want different rims? Perhaps you want a second set of rims and tires for winter or a day at the track. Join me as I explore five great wheel options for the Chevrolet Bolt EV.
Advertisement

GM's number one priority when producing the Chevrolet Bolt EV was cost reduction, so they cut a number of corners when it came to expensive features that had minimal impact on efficiency and performance. So when it came to the Chevy Bolt EV's wheels, GM also saved money by using cast aluminum rims. These rims are cheaper to produce than forged aluminum rims; however, in order to provide similar durability and strength, cast rims use more aluminum than forged rims. This extra aluminum makes cast rims significantly heavier than similar forged rims. That extra weight has a small impact on efficiency, but it also affects acceleration, handling, and overall steering feel.

Luckily, Chevy Bolt EV owners have a number of options for swapping out their stock wheels. In this story, I will share my top Bolt EV rim replacement options. I'll also explain the reasoning and considerations for each wheel choice.

Chevrolet Bolt EV Stock Rims
Before I dive into the best options for Chevy Bolt EV wheel replacements, we should talk about what you're replacing. The Bolt EV comes with two stock rim options that depend on the trim level. The LT trim comes with a basic, silver grey painted rim, and the Premier trim comes with a gloss black and silver painted rim.

In terms of wheel specifications, the two stock rim options appear to be close. I haven't had a chance to weigh the Premier rims and tires personally, but I provide a detailed breakdown of the LT rims and tires in this video.

#5 Generic 16 Inch Steel Wheels
It might seem odd to start this list out with the old, tried-and-true steel wheels, but we should be honest about the Chevy Bolt EV’s primary purpose. It is a people mover that needs to operate in a number of climates and environments, so a number of Bolt EV owners have a second set of rims and tires. Some Bolt EV owners choose to use their stock rims for dedicated winter tires while getting nicer, more expensive rims for summer use; however, other Bolt EV owners prefer to do the opposite. 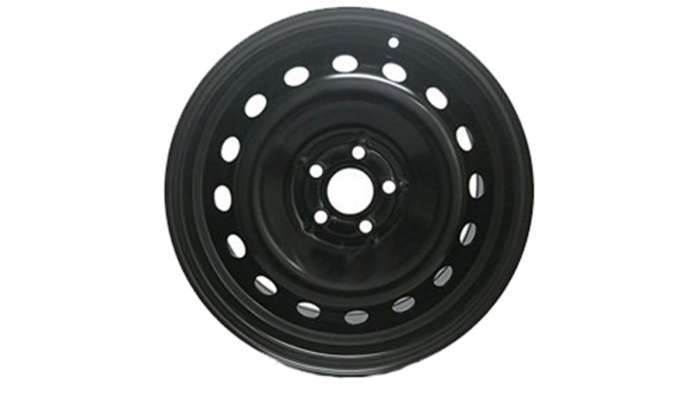 At $50 to $60 each, these standard steel wheels provide a cheap platform for dedicated winter tires. Plus, because they are a 16” rim, the tire options are typically cheaper than if you wanted to buy a set of dedicated winter tires in the stock 17” rim size. Also, ironically, despite being steel, these 20 lb. rims actually weigh several pounds less than the Chevy Bolt EV’s stock aluminum rims.

The other bonus for these rims is just how easy they are to find. With nearly a decade of small GM cars that are compatible with this wheel configuration and size, getting a cheap set should be easy.

#4 Enkei EV5
Ever since my days driving a Mitsubishi Lancer Evolution, I’ve had a soft spot for Enkei wheels. They aren’t always the lightest for their size, but they were always well-built and rugged. As you’ll probably see from my list of top wheel choices for the Chevy Bolt EV, I prioritize wheels that are durable enough for OEM use. 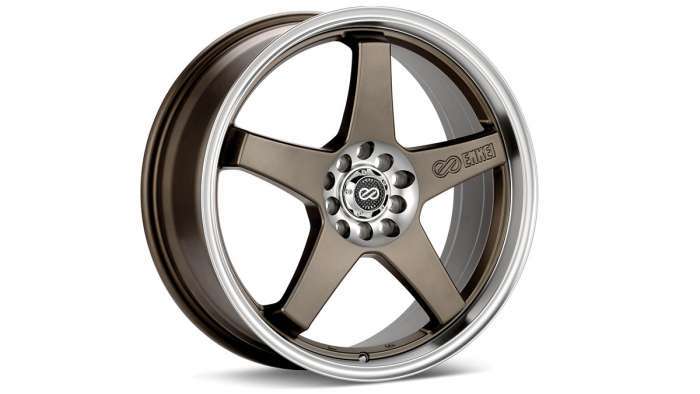 The Enkei EV5 are the heaviest rims on this list, weighing in at 21 lbs. That is still 2 lbs. lighter than the Chevy Bolt EV’s stock rims; however, with that, you get an 18” diameter and an extra 1” of width. This will enable you to mount wider, lower-profile performance tires, resulting in much better traction and handling. A bonus is that the EV5 has a unique five-spoke design that offers a distinct look from most other 5x105 wheels.

The EV5 are a bit pricey, at $200 (available at Tire Rack), but I really don’t see any other good off the shelf options for an 18” x 7.5” rim that mounts directly to the Chevy Bolt EV.

#3 Enkei RPF1
And now for the oddball suggestion that proves I’m just an Enkei fanboy. While Enkei wheels are typically durable and a bit on the heavy side, they did produce one wheel that was notorious among Japanese performance car enthusiasts. That was the RPF1. Despite being cast aluminum, a 17” x 8” rim weighs only 16 lbs., which is a whopping 7 lbs. lighter than the Chevy Bolt EV’s stock rims. 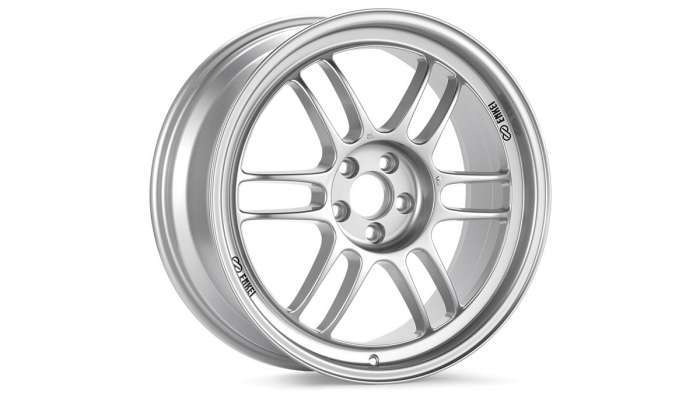 The RPF1 are light, very durable for their weight, and not particularly expensive. The biggest issue for Chevy Bolt EV owners is that Enkei does not drill and tap them for a 5x105 bolt pattern from the factory; however, they do sell blank, untapped wheels.

One source I have come across does appear to offer that service, and they will drill and tap several different RPF1 wheel sizes with a 5x105 bolt pattern. It appears that they are marketing this service for Chevy Cruze owners, so the wheels that they are using have a slightly lower offset, which will push them out a bit farther than the Bolt EV’s stock wheels. Still, it’s better to have more clearance than less.

My main concerns with this are that the work is not being done by Enkei themselves (which pushes the cost of the wheels up to nearly $300 each) and whether the Chevy Bolt EV can support 8” wide rims without additional modifications.

Still, those are common modifications for performance cars, and being able to save 7 to 8 lbs. per corner holds a huge amount of value for those looking to eke out performance. If I were getting a dedicated track wheel for my Chevy Bolt EV, this would be my top choice. 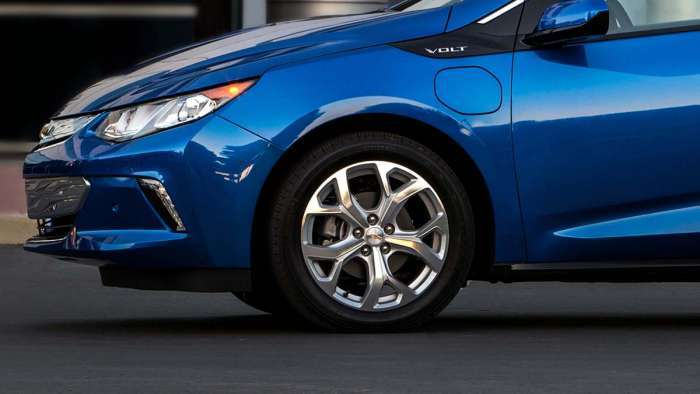 When GM refreshed the Chevrolet Volt for the 2016 model year, they also changed the bolt pattern of the wheels to match the Bolt EV's 5x105 mm. Volts came with several 17” rim options with various styles, and almost all of those rims weigh in at less than 20 lbs., which is several pounds lighter than the Bolt EV’s stock 17” wheels. 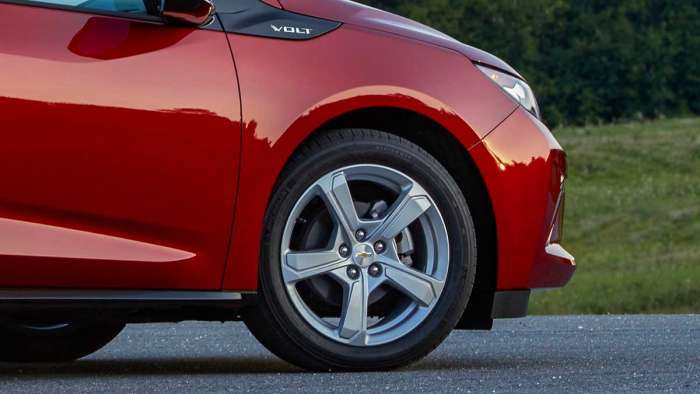 In addition to the rims themselves, GM also changed the Volt's tire to match the make and size (including – most importantly – the outside diameter) of the Bolt EV's Michelin Energy Saver A/S. Michelin claims that the tires provided with the Bolt EV have a different tread pattern than those on the Volt; however, the only perceptible difference between the two tires is that the Bolt EV's tires have a layer of goo designed to seal the tire in the case of a small puncture.

When I replaced my Bolt EV's original tires after about 60,000 miles of driving, I used the OEM Michelin Energy Saver A/S from the second generation Chevy Volt. According to spec sheets, the stock Bolt EV and stock Volt tires are the same weight, but based on my own measuring, the lack of goo appears to remove a pound or so of weight.
So not only can the 2016 to 2019 Chevy Volt's rims be directly mounted onto the Chevy Bolt EV, the tires can be swapped as well. That makes these swaps a potentially high-value proposition because, for just a few hundred dollars, a Bolt EV owner can get a different set of rims plus usable tires. The only thing that I can't verify is compatible between the Bolt EV and Volt are the tire pressure sensors, so expect to have to keep the sensors that came with the Bolt EV (after all, they should still be synced with the car's tire pressure monitoring system).

The biggest concern for Bolt EV owners who want to switch out rims with Volt rims is that not a lot of Volts were sold, and those that were are likely to still be on the road. As an OEM part, ordering them directly from Chevrolet would be expensive, so the only reasonable option is scouring Volt forums and groups for owners who are looking to sell or trade their stock rims.

#1 Chevrolet Cruze ECO Rims
The Chevy Cruze ECO was offered from 2011 to 2016, and it came standard with lightweight, forged, brushed-aluminum wheels. These rims have a nearly identical configuration to the Chevy Bolt EV's stock rims; however, at 17.9 lbs., they are over 5 lbs lighter than what comes standard on the Bolt EV. The Cruze ECO rim's 15-spoke layout and brushed-aluminum finish might not fit everyone's style, but in terms of functionality, you'd be hard pressed to find a better replacement rim for the Bolt EV. 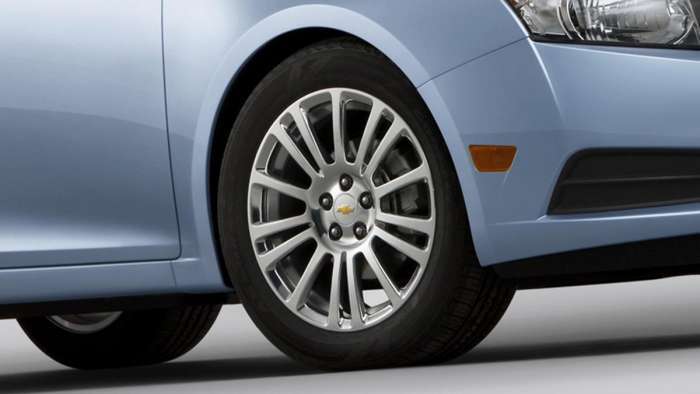 The weight savings provides a much better driving feel than the stock rims, including better acceleration, efficiency, and steering response. I noticed an immediate difference in the way my Bolt EV accelerated and handled after installing these rims. Initially, I didn't see a significant difference in efficiency coming from the stock LT rims; however, as time has passed, it's becoming apparent that these rims are at least partially responsible for the >5% difference in efficiency that I see in my Bolt EV at freeway speeds compared to what other owners and reviewers have experienced. 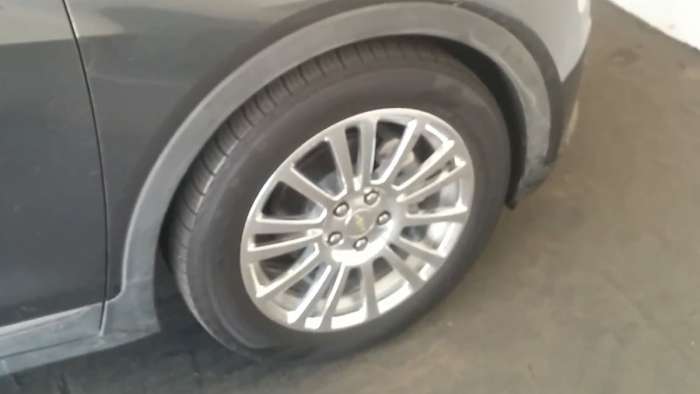 Finally, these rims are a stock, stamped GM part, which gives me confidence to know that these wheels have thoroughly tested and vetted for everyday use. And because of that, these rims are cheap and should be readily available. Chevy has sold tens of thousands of Cruze ECOs, and many of those cars are no longer on the road after a decade of use. If you have the opportunity, I highly recommend grabbing a set to replace your Bolt EV's stock wheels.

Conclusion
For the Chevrolet Bolt EV, GM stuck with a standard wheel sizing and bolt pattern that enables Bolt EV owners to swap out rims with several other GM vehicles; however, there is still not a lot of aftermarket support for the 5x105 bolt pattern. Regardless, it is still possible to find wheels to suit both your individual needs and personal tastes, even outside of OEM wheels.

On a personal note, I’ve been driving my 2017 Bolt EV on Cruze ECO rims for nearly three years and over 100,000 miles, and I’ve had only positive experiences. Not only did the 5 lbs. of weight I shaved off of each corner result in a completely different driving dynamic (making the car more nimble and fun to drive), it also gained a bit of efficiency. So don’t be afraid to give them a try! 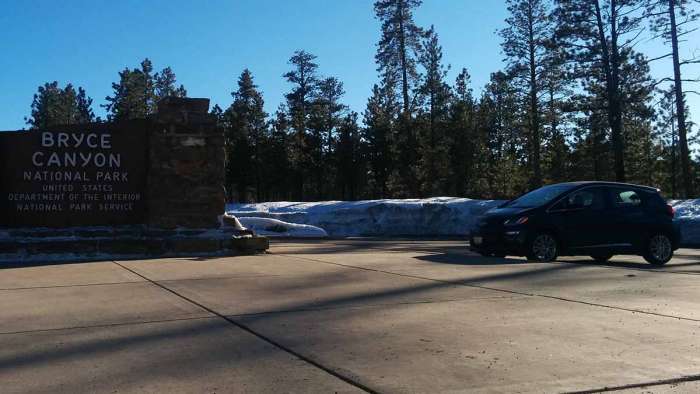 See you next time as I help distinguish between “50 kW” chargers!