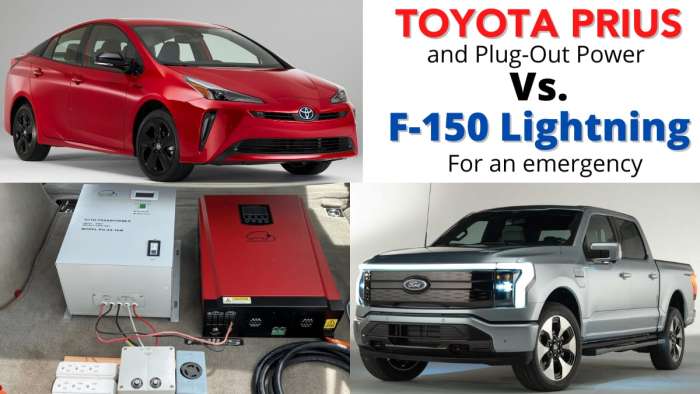 Ford F-150 Lightning Vs. Toyota Prius As A Generator

When the power is out, what will power your home. The F150 Lightning or A Toyota Hybrid with a Plug-Out Power System. Let's see what makes financial sense and keeps your home going.
Advertisement

Hold the hate comments, please. In all due respect, I think the Ford F-150 Lightning is a fantastic work of craftsmanship and innovation. Ford owns the pickup segment, and it makes sense they would take the time to pour resources into the F-150 Lightning to make it a fantastic vehicle.

That being said, there is always competition, and not everyone can afford a new F150. So what do you do when the power is out, and all you have in your driveway is a simpleton Toyota Prius or other Toyota hybrid? You turn it into a generator and use it.

Initial Costs: F-150 Vs Toyota Prius
Toyota hybrids have been out for some time now. It is fair to say that we could get a working Prius for fairly inexpensive. With the used car market being what it is, we will spend $5,000 on a good used Prius and compare that to the F-150.

The rumored cost for the F-150 is between $40,000 to $90,000, a fairly significant difference from the Prius. Remember that we do need to add in the price for the Plug-Out Power System thought. 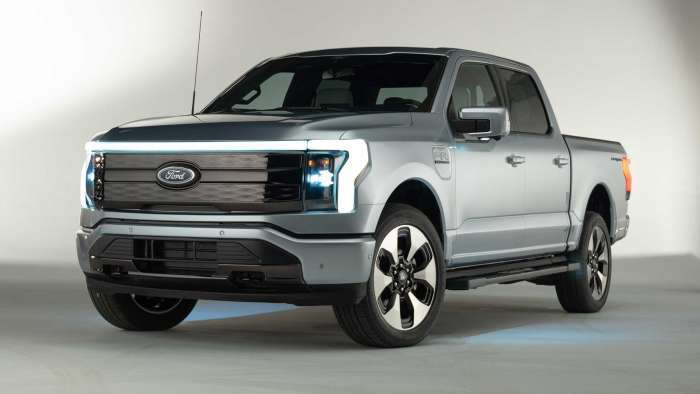 PoP system for any non-plug-in Toyota hybrid will set you back a cool $3,000 bringing the cost of our house powering system up to $9000.

Right off the bat, the winner is a Toyota hybrid and a Prius in our example. Even if you were to buy a new Prius, you would still be ahead. This comparison is mainly to illustrate how little it costs so, the Prius wins.

Benefits Of Ownership
Yes, the 5kW system that PoP provides is significantly less than the F-150 Lightning, which can power a home using 30kW of energy for 3 days and more if the house owners are conservative.

The F-150 would also need to have an extended-range battery to hit that target. 5kW is a decent amount of energy. It can run a refrigerator, freezer, and a couple of low-tolerance appliances. We are not thinking of luxury in an emergency situation, so the basics are all you need. 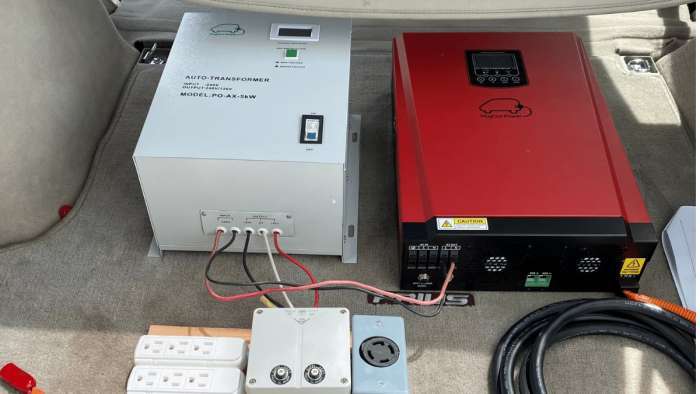 The benefits of the F-150 are that it is a great pickup. Loads of onboard energy make it a veritable driving power bank, literally. It can provide 6 times the amount of output power compared to a Prius and the Pop system.

Power output here is where Ford seriously shines, and it does blow PoP out of the water. But we have to consider a couple of things here.

First, what type of emergency situation are we in? A complete blackout that could take weeks to restore power would mean the F150 Lightning would probably die out before power was restored to the grid for charging. Bummer. Prius and the PoP system can run indefinitely provided there is gasoline available for the car.

This comparison is rough, but I am going to call it a tie. I say that because both systems can give benefits where the other cannot. It would depend on the situation you were in for what system would be right for you.

Conclusion
If you are looking for a straightforward, cost-effective way to power your house minimally with a system in an emergency situation, Prius and the PoP inverter setup is a no-brainer.

You could easily store a couple of 5-gallon gas cans for emergency situations and keep your car running and your house in order until power is restored. The F150 can do that but is limited on how long (even though rumors say up to 10 days).

If you are having a party in the middle of nowhere and you wanted to have lights, a margarita stand, karaoke, a hot tub, and a full kitchen, the F-150 is an excellent choice for a power supply.

Prius and a PoP system are certainly financially sound investments at around $9000 for both a good working Prius and the 5kW system. If money is the issue, PoP is your friend.

The $40,000 to $90,000 you will spend on an F-150 will undoubtedly get you a lot of bling and a good time but may also cripple your finances. Many Americans can leverage credit to get an F-150 but may not afford to have all the accessories installed to run a house.

The PoP system is a great way to have power in just about any situation; keep in mind you are limited to 5kW. That does provide a lot of energy, but you have to be mindful of using it.

That is all for today. If you want to know more about Plug-Out Power and what it can do for your Toyota Hybrid, take a look at their website.

Have a great day, everyone, and remember, Today's Adventure is Tomorrow's Story.

What do you think of the CATL sodium-ion battery?