Have a sticky rear hatch button on your Prius? Here is what I did to do the repair the right way and why it is important you do too.
Advertisement

I am willing to be my soon to be government paycheck that most of us second-generation Toyota Prius owners have had the sticky trunk button issue. If not, you are likely to encounter it at some point.

I have now owned 5 Gen 2 Prius and found out there is only one way to fix this. That way is doing it right. I want to walk you through what you need to expect when doing this repair and why it is so important to do it this way.

Here is what you can expect when repairing the hatch release button cover on your Toyota Prius.

The Problem With The Button
The issue with the button is that it is not the button's fault but rather the nasty cover that keeps the dirt out. This cover, over time, becomes some form of Japanese tar that begins to degrade and gum up the button. It is this problem that I want to walk you through how to repair.

Should you require a button, my condolences, they usually are not cheap but can be found a local wrecking yard more than likely, anyway, back to the issue at hand.

Right Way Vs. The Not So Great Way
As I said before, the covering on these buttons gum up and get in the way of the function when pressed. This issue can lead to goo on your hand (if bad enough) or the hatch may not open. Either way, you need to get the goo off and replace it with a nice new one, as you will see in my pictures.

You can take out the two screws that hold the button in and scrape off the goo while it is in the car. This problem is both irritating, and you can easily strip the screws if you are not careful. You also cannot clean around the button very thoroughly. This is a common issue with Prius and other Toyota models. 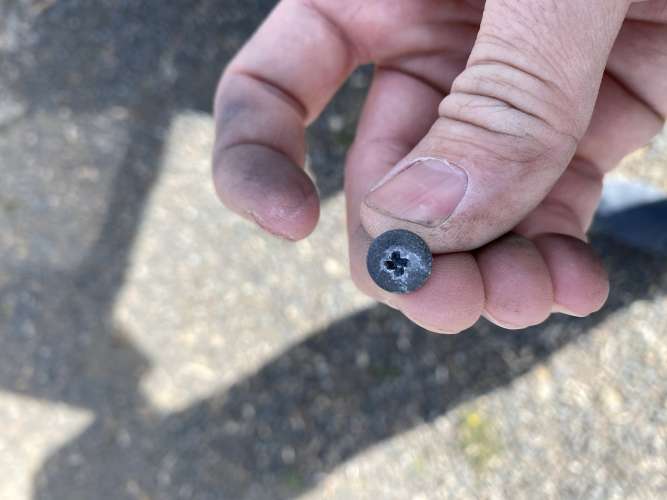 I do not recommend anyone try to replace the cover while the button is still in the trunk lid. This method is the wrong way. You will not get the results you want. You need to pull off the inside plastic cover inside and remove the four 10mm nuts to take the entire handle off so you can access the button and remove it from its housing. My way is the right way.

Cleaning The Button
Once you have taken the button out of the housing, you need to get to work. The kit that I got you can get here on Amazon. Let me tell you this kit is worth every penny. The scraper tool that came with it saved my bacon, and I was super glad to have it through this process.

The other thing that I had a grundle of was alcohol cleaning pads. You can also use goo gone, rubbing or isopropyl alcohol with some cotton balls to get the same effect. Whatever you use, just plan on spending a solid 45 minutes to an hour scraping the goo off and rubbing the surface down to remove the crap. Do not forget to clean the handle part as well.

During this time, I washed the handle part to rid it of an of dirt that had built up over the years. I did this to not feel so bad using the kitchen table to carry out my plan.

The Fresh Install
Once the button and handle were as clean as I could get them, I did a test fit with the new rubber and then installed it.
When I figured out exactly how the new cover went on, I fit it and the button back into the housing and put in the two screws that came in the kit.

I then went out and put the button and handle back on the trunk, tightened up the four 10mm bolts, installed new license plate lights ( I had one out already so two new ones will keep me out of there for the time being) and then I was all done.

Total time invested about 2 hours, most of the time was spent removing the goo off the old button. Everything else was a cakewalk. This is well worth the time to do it while you are in COVID-19 quarantine.

Things To Know And Consider When Doing This Project
You can install a new button cover without doing everything that I did; it is possible I have done it. I will say that doing it the way I am explaining yielded a far better result and left me very satisfied. Hence why I recommend taking it completely out to do it.

The next thing is that you may break some clips that hold the plastic on the back panel. No worries, you can get a back of 20 on Amazon for like $5, so snap them all; if you need to, they are cheap and easy to replace.

Thing three, this may seem like a bit of overkill but replace the license plate light bulbs while you are in there. They are a 194 bulb and can be found at any auto parts store in LED or standard form. I opted for standard due to the LED cost, which was more than double.

Also, the longer you spend scraping and cleaning the button, the better it will function and work for you. Take the time to clean it, trust me it is worth it. I happened to have a ton of alcohol cleaning pads in my house, and I went through probably a dozen or so. Not a big deal.

Last, you will need to have a 10mm socket or wrench to take the handle off. Super easy, but this can deter some people from doing it. I promise it is worth the investment to have the tool to do it.

Conclusion
If you still have questions? HIt me up on Twitter @the_hybrid_guy or visit me in the Toyota Prius Owners Club on Facebook. I am happy to help anyone who needs some guidance on the matter.

Thank you for reading. I hope you found this helpful. I look forward to seeing you in the next story. 4 Reasons Why Owning A Toyota Prius In A Economic Downturn Is A Smart Move.

Gene wrote on November 20, 2020 - 8:01pm Permalink
Hi Peter, Thanks for the tips. The scrapping tool in the Amazon kit was worth every penny. I agree with replacing the license plate light bulbs while it's all apart. It works like a charm now. Thank you, Gene