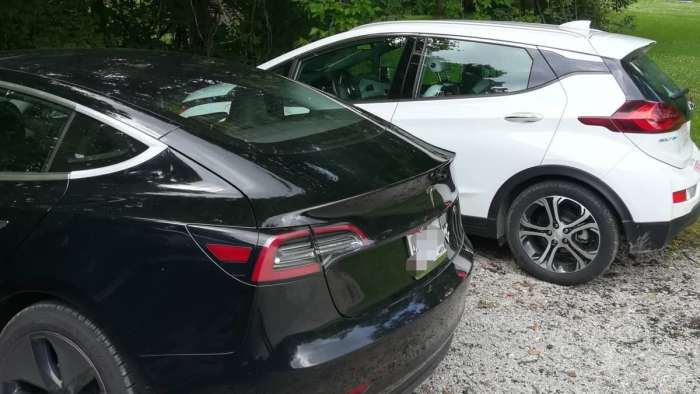 We’re only a couple of weeks into summer, but already there are numerous examples of electric vehicles completing lengthy road trips across North America.

One of the four examples we’ll cover in this story was taken in a Tesla Model 3, but the other three focus on the Chevy Bolt EV and Hyundai Kona Electric, which in many ways parallels the Kia Niro EV, showing that non-Tesla EVs can also make for a fun road trip.

1. NRDC Team Tours the Midwest in a 2019 Chevy Bolt EV
Electric vehicles and sustainability go hand-in-hand, so it comes as no surprise that an organization like the Natural Resources Defense Council (NRDC) is all-in on electric transportation.

In June, a team of four young NRDC EVenturers set out on a clean energy tour of five Midwest states in a 2019 Chevy Bolt EV, covering 1,611 miles and nine major cities along the way. Even with so many drivers on board, that's a lot of territory and reporting to cover in a little over one week.

You can read their travelog entries on the NRDC blog and check out the @electricroadtrip2019 Instagram feed for features on individual EV drivers and clean energy initiatives in the cities they visited.

2. Engineering Explained Heads for the Hills in a Tesla Model 3
YouTuber Jason Fenske is a relatively recent convert to electric vehicles, but since taking delivery of a Tesla Model 3 Performance in late 2018, he’s wasted no time putting some miles on the clock and covering every aspect of the car.

The latest entry into Fenske’s growing collection of EV advocacy videos on his Engineering Explained channel is perhaps the most impressive, covering around 2,000 miles on a trip from Idaho to Michigan.

Take the title “How Miserable is a Tesla Road Trip?” with a large shovel of salt, as Fenske’s report is a mostly positive recap of an uneventful trip, despite covering such a great distance in several states that aren’t known for their commitment to electric vehicles. If you like to leave the planning to the car and minimize time spent charging, this video clearly shows Tesla as the gold standard for an electric road trip.

The channel’s host, Kyle, takes more of a road warrior approach to his EV road trip, cranking out more than 1,500 miles in just a couple of days on his journey from Stamford, CT down to Marco Island in Florida.

He puts the Electrify America network to the test and provides valuable insight into traveling with the latest generation of non-Tesla electric vehicles, as the Hyundai Kona Electric he drives is comparable to the Kia Niro EV. Both charge more quickly than earlier competitors like the Chevy Bolt EV and second-generation Nissan Leaf, which minimizes plug time for those with less of a penchant for leisurely meals or doing some shopping while the car gets its charge on.

Kyle also headed out on a more recent road trip in a Tesla Model 3 (with dogs!), so take a look at his road trip playlist and watch the one that aligns best with your EV lifestyle.

4. Plug & Play EV Tests the Canadian Charging Network in a Chevy Bolt EV
Why leave out our own EV road trip when it covers as many miles as the others and even takes things across international borders? Well we won’t, because the whole thing was also captured on camera and the first episode went live last week, with a second coming soon.

The journey so far has covered more than 1,500 miles across five states, two Canadian provinces, six major cities, and more microbreweries than I’m able to recall at the time of writing (nothing to do with the alcohol, honest).

On the longest driving day, we managed to cover some 525 miles in under 12 hours, further rebuffing the claims of an incompetent New York Times article that EV road trips are long on plug time and short on fun.

Some of the initial observations were recorded when I detailed four essential elements of a Chevy Bolt EV road trip last week, but there’s plenty more to come in the video series and here in future Torque News stories.

For now, suffice it to say that the Canadian charging infrastructure seems exceptionally reliable and you can comfortably run A/C on a Bolt EV road trip at highway speeds without sapping the life out of your battery.

Are you taking a long EV road trip this summer? Let us know where you're headed and what vehicle you intend to take in the comments!

See you in the next story, where we’ll discuss the long-term reliability of the Chevy Bolt EV as its fourth model year looms on the horizon.