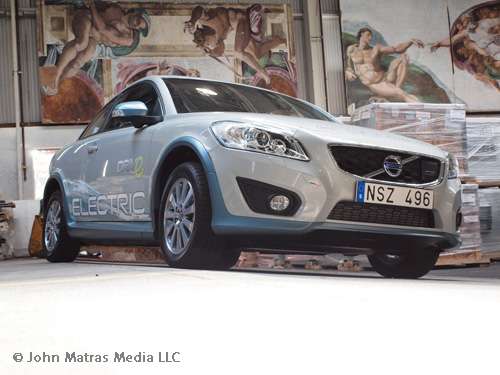 Volvo could have a battery-electric car in production and on the market as early as 2014, according to Leonard Stegland, president Volvo's Special Vehicles. That's dependent on Volvo being able to make a business plan for the Volvo C30 Electric, but beginning in the first quarter of 2012, Volvo begins testing a fleet of the battery-electric Volvo C30 coupes in daily tests in the U.S. Volvo will place fifty on the east coast and fifty on the west coast.
Advertisement

Volvo began its development program for electric vehicles 25 months ago with a search for a partner to supply batteries and work with Volvo on an electric vehicle plan. From 235 lithium ion battery producers, only six or seven could produce "what we were looking for," said Stegland. The batteries had to have "the right chemistry" as well as be practical to fit inside a car.

Volvo found what they were looking for in New York City. It was Ener1, an company that according to its own description "provides commercial-scale clean technology solutions for the transportation and grid energy storage markets globally."

The partnership with Ener1 allowed Volvo to jumpstart its electric car development, freeing Volvo from having to develop expertise already available from Ener1, which had already worked with Think, the Norwegian electric car company.

Volvo chose the C30 coupe, perhaps the most idiosyncratic vehicle in its fleet--as well as one of the lightest--for the platform for electric vehicle development. It's nominally a four-seater, and remains just that with the conversion to electric power. The battery modules fill the fuel tank area and the central tunnel, though stealing room from console storage bin, but otherwise batteries do not rob any interior room from the Volvo C30.

Tom Goesch, who heads the transportation program at Ener1 said that in the decision of where to put the batteries, safety was number one, Stegland noting that the placement of the batteries kept them crumple zones.

The two battery packs are independent, each with a 35Ah capacity and each with its own controller. The management system is integrated into the C30's overall management system.
Stegland said that an electric car shouldn't have to compromise for weather, but because the ambient air temperature can have a dramatic effect on battery effectiveness, the electric Volvo C30 will include an ethanol-fueled heater to warm the battery in cold weather--and Swedes know cold weather. But Stegland also stated that heat is very hard on batteries as well, so the Volvo C30 Electric can not only precool the passenger compartment but can preclimatize the battery pack as well. And yes, there's an app for that. Owners will be able to preheat or precool the Volvo C30 from their cell phones.

The Volvo C30 Electric has a range of about 90 miles, and recharge of a fully-depleted battery takes eight hours on American house current, though alternative charging strategies are being investigated with the expectation of getting that down to the two hour range in the future.

When or whether the Volvo C30 Electric goes into production depends largely on price, of course, and Goesch said Ener1 is working to bring costs down. Batteries elements are now made in Korea, assembled in Ener1's facilities in Indiana and then forwarded to Sweden for installation. Another way of keeping production costs low is to build vehicles designed from the beginning to be compatible with either battery electric or gasoline/diesel engine power.

A brief drive in a prototype Volvo C30 Electric on Manhattan's assorted road surfaces gave the impression that the Volvo electric coupe is a real car, not a college senior engineering project. It's deathly quiet, of course, lacking even electric motor/gearing whine, and ride over the various surfaces was comparable to a gasoline engined car's.

The tachometer is replaced with two needles, one that shows current use/recharge of the battery and another a eco-driving gauge that doesn't seem to be completely thought out yet. A small readout in the info center on the dash tells how many miles are left in the batteries.

To the casual observer, the Volvo C30 Electric appears ready to go now. Of course, that's without considering the daunting tasks of engineering the manufacturing process, arranging distribution and service, and of course figuring out how to make money--or at least a business case-- out of it. But if everything is perfect, the starts align and the right Taro card is played, the Volvo C30 Electric--or a battery-electric Volvo--could be on the market by 2014.