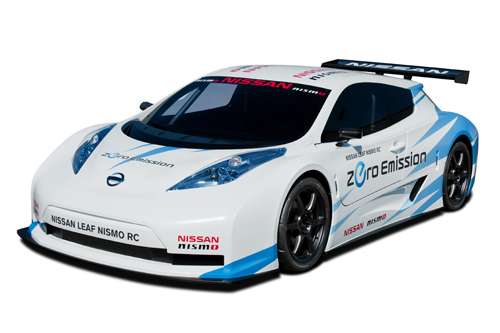 The Nissan Leaf NISMO RC, the battery-electric race car version of Nissan's battery electric Leaf, is going to run at this year's Le Mans. But don't worry about long extension cords or lengthy pit stops to recharge the battery, the Leaf NNISMO RC will be making only a demonstration performance at Le Mans Vers Le Futur.
Advertisement

The Nissan LEAF NISMO RC was unveiled at the 2011 New York International Auto Show. It's now making its public debut under power ahead of the famous 24-hour endurance race at Le Mans.
The Le Man Vers Le Futur--or Le Mans of the Future--began last year as a support event for the race and was so popular that the race organizers decided in favor of a repeat this year.

Also appearing will be:

Venturi Volage, an all-electric race car concept that debuted at the 2008 Paris Auto Show, using “Michelin Active Wheel” technology that uses a drive motor in the hub of each wheel.

Green GT, an all-electric Le Mans prototype race car concept from Switzerland that has been around since 2009. It has a claimed top speed of 171 mph.

Formulec EF01, a single-seat formula car designed for a proposed "Formulec world series" in 2012 and with performance said to be equal to that of a Formula 3 car.

Audi e-tron Spyder, a concept two-seat open concept sports car with electric motors for the front wheels and a 3.0-liter twin-turbo TDI diesel with the ability to travel on electric, diesel or both.

The organizers report that "some" of the cars will participate in a demonstration run during a break in the Thursday, June 8, practice session, and at 12:10 p.m. to 12:30 p.m. on Saturday before the start of the 24 Hours of Le Mans. Each demonstration session will be comprised of two laps of the 13.6 mile Circuit de la Sarthe used in the 24 hour race itself.