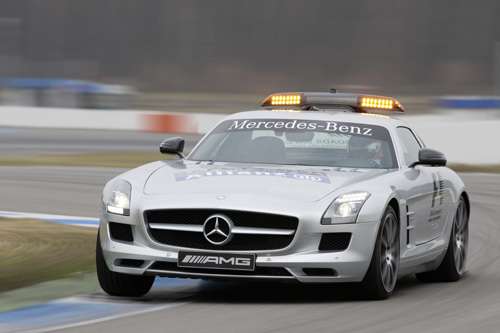 The Mercedes-Benz SLS AMG and the new Mercedes-Benz C63 AMG Estate have been chosen to perform safety and first medical service at Formula 1 races for the 2011 season.
Advertisement

The Mercedes-Benz SLS AMG was first used last year during its first year of production and is the latest of a series of AMG vehicles performing Official Formula 1 Safety Car duties as far back as 1996, the same year the first AMG Medical Car was used. The latest generation of Mercedes C-Class AMG wagons is getting the honors its freshman year.

In Formula 1, the safety car performs the duties of what might be better known to Americans as a "pace car. The safety car is sent out on the race track to control the speed of race cars after an accident or during dangerous conditions such as low visibility.

The Mercedes-Benz SLS AMG was selected for its ability to go fast enough to keep the racing tires and brakes warm and the Formula 1 cars' engines from overheating. The racers are designed for air flow over their radiators at racing speed. Driving too slowly means not enough cooling air and a ruined engine.

The two-seat gullwing sports car can provide that needed speed down the straightaway or through corners. The 6.3-liter naturally-aspirated V-8 engine produces 571 horsepower and can hit 100 km/h (62 mph) in 3.8 seconds. The SLS AMG requires no mechanical modifications, though a lower restriction exhaust silencer is replaced by one less restrictive, purportedly to allow the car to "breathe more easily", though Mercedes admits that it gives "Formula 1 fans an even more emotionally charged sound experience." In other words, it's louder and sounds really neat.

The safety car is positioned at pit out and is sent onto the track by race control when needed. The car is fitted with a special wind tunnel tested light bar that's mounted on a new carbon fiber roof and is contoured to not interfere with the airflow over the rear spoiler, maintaining stability and traction at high speed.

The light bar has a pair of centrally located greed LED lights which allows passing by all race cars until the field forms up behind the safety car. At that point, outer orange flashing lights are turned on and no overtaking is allowed. So that the safety car can be seen in low visibility conditions, there are white stroboscopic lights in the headlights and taillights, and so no Formula 1 drivers are confused by the traffic on the track, the Mercedes SLS AMG has a special license plate reading "Safety Car" illuminated by 700 LED lights.

The Mercedes-Benz SLS AMG is used to pace Formula 1 racing and some support races as well. It's driven by German race car driver Bernd Maylander with Brit co-driver Pete Tibbetts in the passenger seat. Tibbetts monitors the rear view video camera, keeping an eye on the following race cars.

Two central monitors in the safety car are used to monitor race progress, and radios allow Maylander and Tibbets to communicate with each other and race control. Tibbets also has his own rearview mirror. The signals the Formula 1 drivers see are transmitted to the safety car too, shown during yellow or green flag conditions.

The new Mercedes-Benz C63 AMG Estate replaces the earlier model used in 2008 to 2010 as the Formula 1 medical car. The C63 AMG Estate--Stateside called a station wagon--used as the medical car is powered by the standard 487 horsepower V-8, modified with the AMG Performance Package that boosts performance from the standard AMG 6.3 liter V-8 that makes only 457 horsepower.

The performance package also upgrades the brakes with internally ventilated composite brake discs on the front wheels. TheC63 AMG Estate will have one of the coolest sounds ever to come from an emergency vehicle, thanks to its low restriction high volume exhaust system.

The Official F1 Medical Car, like the safety car, has a roof-mounted light bar and strobe front and rear lights in front and rear, plus the LED equipped license plate on the rear for added visibility.

The medical car is equipped with two monitors for following the race and radios for staying in touch with Race Control and are the only other modifications to the C63 AMG wagon, other than the full complement of medical equipment, including a defibrillator and respiration apparatus.

There are actually four of the specially-equipped AMG vehicles at each race, one of each plus a backup car for each. The cars are shipped to each race venue where they're available for Formula 1 as well as GP2 Series and Porsche Supercup races.

Quite possibly the best job at a F1 weekend, short of a seat in one of the race cars, is driving the Mercedes-Benz SLS AMG Safety Car and hoping for fog for a moment in the, well, not the sun. The Mercedes-Benz C63 AMG Estate Medical Car would better remain parked, though of course there's the laps one would have to drive just as, you know, practice.