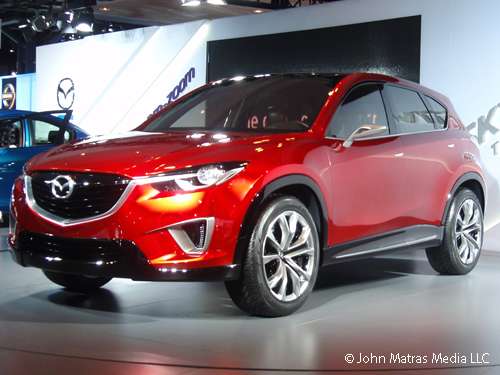 Mazda breaks new ground with in fuel economy with the new 2012 Mazda Mazda3 that will get 40 miles per gallon with a new technology called Skyactiv. Skyactiv will also be applied to the Mazda CX-5, a future smaller crossover, and will help define Mazda's future designs. Mazda made the announcement at the New York Auto show, also releasing plans for diesel in the U.S.
Advertisement

Rather than a vehicle that represents only a small percentage of its fleet, Mazda is introducing Skyactiv on the Mazda3, which represents one-third of Mazda sales worldwide. Skyactiv is actually a range of technologies, from new engines and transmissions to chassis developments, all to increase fuel economy and performance. This fall, the 2012 Mazda Mazda3 and Mazda CX-5 will receive a new 2.0-liter four-cylinder Skyactiv engine and new six-speed manual and six-speed automatic transmissions.

The new Skyactiv engine is remarkable in that has a 14:1 compression ratio and runs on regular gas. Those familiar with automotive technology will recognize this as a major technological breakthrough. Usually, 12:1 is considered the outer limits, even on race eninges, and those running on premium fuel. The higher compression ratio increases the engine's thermal efficiency, or ability use more of the "heat" in gasoline.

The automotive tech savvy will recognize an unusual pit in the center of the Skyactiv engine's piston faces. The new engine also utilizes direct injection, which sprays a precisely-times and positioned fine mist of gasoline directly into the cylinder. This advanced fuel delivery system is used for its increased efficiency compared to traditional port fuel injection.

The new transmissions use the latest available technology, of course, but the six-speeds also replace a five-speed manual transmission and an almost antediluvian four-speed automatic. The multiple speed transmissions allow engines to stay in the best rev range for better fuel economy.
The Mazda CX-5 crossover, sized below Mazda's CX-7 and CX-9, will go on sale in the U.S in spring 2012. The CX-5 is based on the Minagi Concept, which debuted at the Geneva Auto Show earlier this year. The Minagi Concept follows Mazda's new Kodo-"the soul of motion"--design theme that will also influence the facelift the 2012 Mazda3 will receive this fall.

"There's still money to be made" with the internal combusion engine, said Davis, adding that Mazda would not tie itself to any one technology.

Anonymous wrote on April 24, 2011 - 3:31pm Permalink
How soon can I get the Mazda CX-5 ?
Anonymous wrote on May 22, 2011 - 1:15am Permalink
Diesels are simpler and less expensive than the joke hybrids. CX-5 with a diesel would be great.
LateralG wrote on June 19, 2011 - 10:51am Permalink
CX-5 Diesel: If they build it, I will buy it.
Timbo wrote on July 22, 2011 - 11:02pm Permalink
Affordable diesel vehicles for the average commuter are way overdue. We in the US who were around for the joke diesels that GM was turning out in the 70's know that the diesels of today by reputable manufacturers are a whole different animal. I can't afford a Mercedes E or BMW 335d and sorry VW but your shaky reputation (even though affordable) counts you out. Mazda - if you put a diesel in the the 3 hatch, the 6 sedan or the CX5 sign me up. My 67 mile per day commute would be a lot less expensive.
Anonymous wrote on August 19, 2011 - 5:45pm Permalink
Sounds good. Another Mazda with better fuel economy compared to before. First time I've heard of this skyactiv. It seems that mazda oem parts.
Anonymous wrote on October 14, 2011 - 10:35pm Permalink
Mazda is now making its vehicles like SUV they've engineered the vehicle to perform like a truck but with the comfort of a sedan. Unlike other trucks it has no airbags suspension, yet the handling is like an everyday car. Good thing Ford develops its platform.
Diesel 2 wrote on December 25, 2011 - 10:34pm Permalink
I have had hope for Mazda since they first talked about the Sky D Drive, a diesel power train that could sweep the market place. The CR 5 looks cute but I think the first market in USA will be in small { Ranger size } pick ups for the fleet market as professional fleet managers will not only see the value in 30/40 MPG but won't have been over come by the fear of diesel that GM, the EPA and CARB have instilled in much of America. It's unfortunate that one of the Detroit 3 could not have this for-site. Mazda you have my best and when the lease on my Ford is up I will visit one of your dealers.
Tudor wrote on December 25, 2011 - 10:34pm Permalink
It's about time Diesels are coming to North America. They are so much more fuel efficient and burn the fuel better than Gasoline. The price in Canada is slightly lower as well, but it will get you 20-25% further on the same size tank of gas. Why not??? I owned a Protege5 in the past, where do I sign up for the Mazda3 Diesel. Oh and please, make it more trim. The current Mazda3 looks big and fat to even the previous gen.