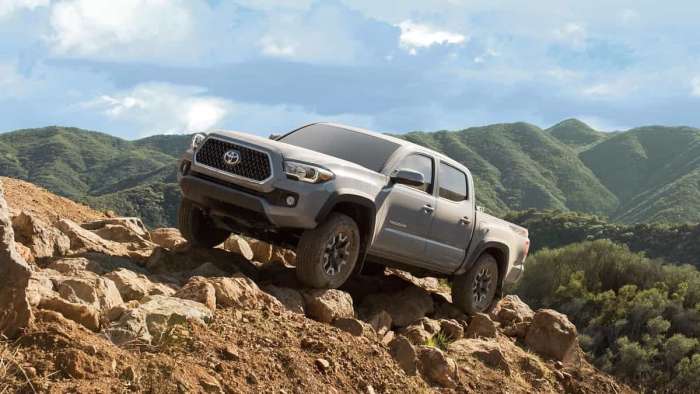 Toyota announced an upcoming model year refresh for its popular 2020 Tacoma. A majority of truck enthusiasts were thrilled, while others not so much, having mixed reactions to these new 2020 updates. Here is why:
Advertisement

The Toyota Tacoma has long been America’s best-selling midsize truck and it is showing no signs of slowing down. In fact, Tacoma has seen 18 consecutive months of increased sales. However, it is mid-cycle with its current generation, meaning it is not quite time for a redesign. But, with increased competition in the segment, 2020 Toyota Tacoma needed some important updates and improvements.

So what are these 2020 Tacoma updates Jeff?

Although not earthshattering like a new engine and transmission, 2020 Tacoma changes were based on extensive customer feedback. Nearly all Tacoma grade levels will be seeing new grille and wheel designs. Also, the most talked-about “small” feature for the truck is the addition of an electronically powered 10-way driver’s seat on the SR5 and above. Tacoma now comfortably accommodates drivers both shorter and tall (I sound like I just ordered a Starbucks drink there).

Every trim level will receive its own unique additions, but all will receive a boost with multimedia improvements. A larger 7” touch-screen (up to an 8” screen in higher level Tacoma’s) starting with the base SR version will improve convenience for passengers, along with standard Android Auto (yes I said Android Auto), Apple CarPlay and Amazon Alexa compatibility.

TRD Pro gets some love with a 2020 Tacoma exclusive color in Army Green. You can also choose Super White, Magnetic Gray Metallic and Midnight Black Metallic. Also, look for new sequential LED/DRL headlights and retuned Fox 2.5-inch internal bypass shocks and front and rear springs. Off-roading thrill seekers should find the new Multi Terrain and Panoramic View Monitors helpful as they journey to parts unknown. By the way, consider the advantages of the 2019 Tacoma here.

When I wrote my original 2020 Tacoma article last week, I never realized what a polarizing conversation it would inspire. I guess you could say this is every writer’s wish for their stories. I love reader feedback. It gives me a great pulse for what is important to car and truck buyers.

Most of the comments I received on both my Torque News article and my “Toyotajeff” Toyota YouTube channel (subscribe to my Toyota enthusiast channel here) was positive, with everyday truck fans looking forward to what is coming this fall. Reader Amir commented that he is ready to go, “When can I order one and when is it coming out?” To answer that second part, 2020 Tacoma is scheduled for a September retail delivery time frame Amir.

“I love those new full LED lights. Sharp looking truck!” was how Chris, a loyal YouTube viewer of mine, felt about the new 2020 Tacoma. Another reader Debbie marveled, “Power driver’s seat and Android Auto? I can’t wait. Good job Toyota!”

As you can imagine, driving out west brings its share of challenging and difficult terrain. James commented, “Big fan of Taco. 360 view is the best for off-roading in Montana.” He is clearly looking forward to the new multi-view cameras that show the views in the front, sides, rear and even underneath the Tacoma.

And the flip side…

Other Tacoma loyalists were not as excited about the updates. They were hoping 2020 would be the magical time for a full redesign.

One Truck owner “M” lamented, “…so the upgrades for 2020 don’t interest me much without an improvement in drivability via powertrain improvement.”

“A lot of new gadgets, that’s not what made the Tacoma the Tacoma. They need to add to its capabilities” commented another truck loyalist.

Many Tacoma fans felt it should be time to make updates to Tacoma’s engine, transmission and the all-important miles per gallon. There have been rumors about a shared platform with Toyota Tundra as well as powertrain improvements for the next generation Tacoma. Time will tell…

To sum things up

I am personally pleased to learn of the plans for 2020 Toyota Tacoma. Since this is not the year for a full redesign, these are key upgrades that customers have been asking for. You have no idea how many hundreds of YouTube comments I get monthly (and I am not exaggerating) asking about Android Auto and Apple CarPlay and when Toyota will add these popular applications to their favorite models. They also ask (though not quite as often as the apps) about the lack of a Tacoma power driver’s seat. Fortunately, Toyota listened with the 2020 Tacoma.

READ: Toyota adds software update to retrofit 2018 Camry and Sienna vehicles with Apple CarPlay
.
Perhaps one Tacoma owner Tom summed it up nicely regarding 2020 Toyota Tacoma updates, putting in a simultaneous plug for Tacoma’s reputation for long-term dependability. “Changes like this might make me think about upgrading from my 2002 Taco! I'm the original and only owner, and it's still going strong with almost NO issues in its lifetime. #toyotareliability.”

What do you think of the refreshed 2020 Toyota Tacoma? Do you plan to be in the market for a new truck within the next year? Thanks for reading and following along with my Toyota news coverage. See you next story…