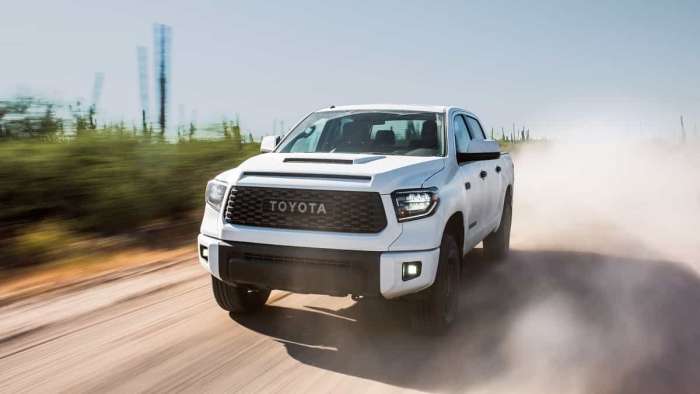 The Toyota Tundra has not seen a new design since 2007. Big changes are coming, possibly for 2021. Plenty of rumors are swirling, with even talk of a Hybrid Tundra version. But, what would be the best changes to make this new redesign of a Hybrid 2021 Tundra a sure winner?
Advertisement

The Toyota Tundra is due a complete redesign, potentially as soon as 2021 model year. Tundra testing and planning are ongoing as we speak, leaving us guessing as to what will happen next with this third generation full-size beast. A hybrid Tundra is rumored.

A quick history of Tundra to catch us up to speed

Toyota first introduced the Toyota Tundra with the 2000 model. Truck buyers had the choice of a 3.4-liter V6 and a 4.7-liter V8 engine. That seems like a very long time ago.

A second generation Tundra was introduced in 2007, and this truck was super-sized into what we know today. There have been refreshes along the way, both in 2010 and in 2014. But, relatively speaking, the Toyota Tundra is ready for a redesign.

And big changes are coming…

So what is Toyota testing right now?

Whenever an important model redesign is within a couple years to retail, there comes with it a chaotic flurry of speculation and rumors. Nobody really knows. But everyone wants to be the first to know what’s new. This couldn’t be more accurate than with the upcoming 2021 Toyota Tundra.

According to rumors, several possibilities exist.

• The next generation of Tundra and Tacoma will share a same platform. The benefits of this Toyota New Global Architecture (TNGA) are many and include improved ride quality, more responsive steering, lightweight designs including powertrain, improved gas efficiency and improved production times.

• A potential shocker within the truck community would be the introduction of a new Tundra hybrid system. This rumored hybrid would be powered by a twin-turbocharged 3.5-liter V6 engine. It is speculated that this will produced mpg upwards of 30 miles per gallon and produce 450 horsepower and get you going with 500 lb.-ft. torque.

• Toyota could be testing a new rear suspension. Recent spy photos of the new Tundra, with its lower rear end draped mysteriously in thick wrapping, have led to speculation of a completely different rear suspension. Might there be a modernized new coil or air spring suspension revealed in the near future?

But what improvements would make the most sense?

It has been over a decade since Toyota Tundra received a new body. We do appreciate the facelifts in the meantime though. Dr. Frankenstein is ready – now let us make the monster. Amidst tough competitors in a crowded full-size playing field, many feel it is time to make a splash. Here are some changes I think would be most impactful.

We all have opinions on what engines would be ideal. Some would like to see the 5.7-liter V8 engine stick around. I mean, it does produce 381hp and 401 lb.-ft. torque. Many have guessed a 5.0-liter or 6.0-liter V8 is the way to go. A hybrid option would really help, but will it actually come to fruition? And, I have been hearing rumors of a Tundra diesel for at least a decade.

I would honestly like Toyota to keep around the 5.7-liter engine as one option. It is proven for over a full decade now. Perhaps pair it with a 6.0-liter option and the twin-turbocharged 3.5-liter hybrid. Not sure they would keep a 5.7 AND 6.0 though. Whatever the engine choices Toyota reveals to us, I would like to see in excess of 400 horsepower, and hopefully up to 450hp, with a healthy increase in torque. The torque must be more than the horsepower. We need to pull!

I think the new Tundra would be best served with an 8-speed or even 10-speed automatic transmission. I don’t suppose Toyota could also throw us truck enthusiasts a bone and offer at least one grade level as a manual transmission, could they?

Feel free to leave your ideas for the new Tundra powertrain. It is quite possible 100 people will give 100 different suggestions. Who will be right though?

What should towing capabilities be?

Currently the 2019 Toyota Tundra has grade levels with a minimum tow capacity of 6,400 pounds and up to 10,200 pounds. Not everyone needs to tow/haul things this heavy, so not every Tundra requires this maximum rating. However, I have heard enough feedback from my truck enthusiast forum to know they would like to see a towing capacity in excess of 12,000 on some Tundra configurations. I agree.

A new CrewMax option with a longer bed

In my dream scenario, Toyota will continue with a choice for consumers between Double Cab and CrewMax. But, I would love to see Tundra pairing the larger engine with a CrewMax that offers both a 5.5 foot and a 6 foot or 6.5 foot bed. I do not feel CrewMax rear seating size should be decreased. That would defeat the benefit of why people buy the CrewMax – they enjoy this extra space for taller passengers. But, with this alternative, it gives you what I would call the best of both worlds.

How about new Tundra comfort and convenience?

Let’s get this out of the way. The 2020 Toyota Tundra will offer both Apple CarPlay and Android Auto. Logic says we should not even worry – these popular applications will be on the new Tundra redesign.

I think the new interior should have a simple layout, with buttons and controls equally easy-to-reach for drivers and co-pilots. It should be loaded up with new technology (varying based on grade level, of course) and it will feature a minimum 7” touch-screen. Don’t be surprised to see a much larger touch-screen in the 11”-12” range on higher level grades such as the Platinum equivalent.

To help families on big road trips, I would like to see as much storage space as possible. I will cross my fingers that Tundra has more under-seat storage bins and compartments.

In the midst of all these rumors and speculation over what a new-and-improved 2021 Toyota Tundra will look and drive like, it is crucial that Tundra retain its reputation for quality, reliability and dependability over the long haul. These are all reasons why Tundra, along with Tacoma sit right at the top of Kelley Blue Book’s Highest Resale Value for 2019.

READ MORE: Factors to help you decide between a Tundra and a Tacoma

One of my viewers perhaps summed it up best. “It’s important that Tundra stay smooth, powerful and reliable. My 2007 Tundra has 275k miles on her with little to no issues at all. I would like to see over 400hp though.” Toyota Pride my friends…Toyota Pride.

Thanks for reading everyone. Feel free to check out and subscribe to my “Toyotajeff” Toyota YouTube channel. See you next story…