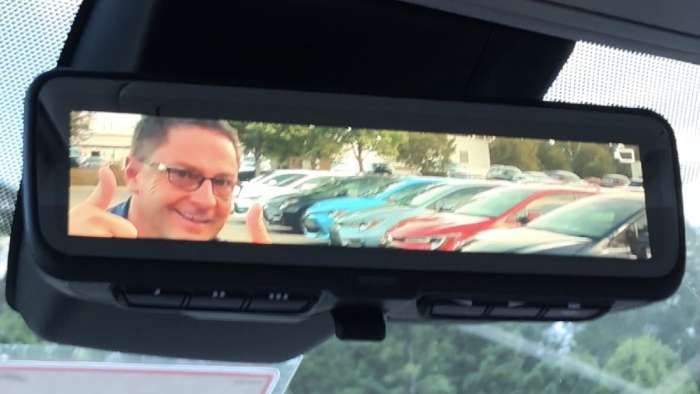 How to Improve Visibility in Your 2019 Toyota RAV4

Toyota’s fifth-generation 2019 RAV4 is getting rave reviews and booming sales due to its impressive styling, along with improved safety and technological advances. See how one all-new feature is changing the way you see while you drive.
Advertisement

It appears the 2019 Toyota RAV4 has just about everything going its way. Car buyers are loving its new sporty and rugged appearance. Loaded with new safety and technological upgrades, shoppers looking for improved safety and convenience are confident checking all their appropriate boxes on their wish list.

And did I mention sales for June were at an all-time high for this small-but-powerful SUV? Impressive.

One of the most remarkable aspects of a vehicle model redesign is in the little details – the small things that might often go unnoticed or unchanged from its previous generation. Meet the 2019 RAV4 digital rearview mirror.

How does the 2019 RAV4 digital rearview mirror work?

The new 2019 RAV4 is loaded with cameras to assist you in many areas of driving. A camera in the rear of the car provides you with your backup camera. One at the top of the front windshield, a valuable Toyota Safety Sense tool, is watching for other vehicles, your lanes, and road signs. One available camera in the front bumper, as well as under the side mirrors, can show you birds eye views. And now there is also a rearview mirror camera.

The digital rearview mirror allows people the opportunity to see a complete, unobstructed view of what is happening behind them while they drive. Normally when looking out our traditional rearview mirror, we have to look around and through the headrests of the second row, along with rear seat passengers (especially the taller ones).

At a ball game, this would be what we call “obstructed view seats.”

How does the digital rearview mirror work?

At the heart of this system is a small camera located conveniently just inside the back tailgate at the top of the glass. It faces outward.

Your rearview mirror gives you two choices: to operate in traditional mode or in digital mode. Simply flip a switch at the bottom of the mirror and you can alternate between the two polar opposite views.

The convenient part about the mirror is that you can tweak it to move the picture you are seeing up and down or left and right. You can also angle your view to either side, as well as zooming in our out. All in the name of giving us the best view possible.

When I test drove the 2019 Toyota RAV4, nighttime driving did take some getting used to with the digital mirror. The main reason I say this is that it can be very bright when everything around you is dark. Plus, the picture is so much brighter and bolder than you are used to seeing when driving at night. Always with a solution to this, the digital rearview mirror lets you adjust the brightness of your picture easily. Dim away my friends.

During my evaluation of this all-new 2019 Toyota RAV4, I really tried to incorporate the new digital rearview mirror into most of my drive time. After all, why not try out every shiny new toy I had to play with, right?

There really is an adjustment period as you get used to a brighter, bolder view of what you see behind your car. I might compare this to someone who has always had blurred vision and then gets glasses for the first time. Bold. In your face. Crystal clear vision. Finally. 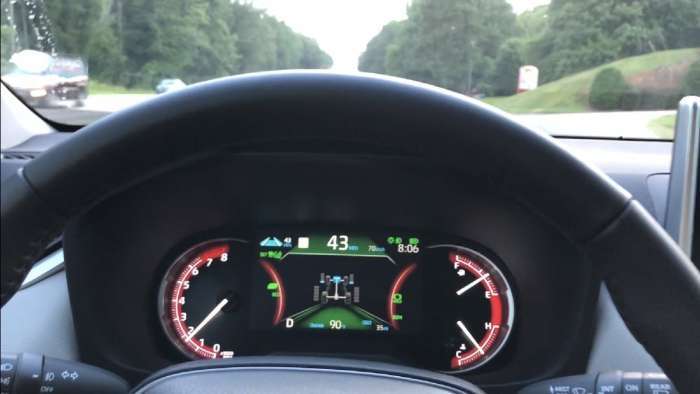 Along with a favorable impression of the digital rearview camera, I came away also very pleased with 2019 RAV4 exterior and interior styling, its smooth handing and suspension and solid gas mileage. But those are stories for different days. And there WILL be stories.

What is your impression of the all-new 2019 Toyota RAV4? Do you own one yet, and if so, did you buy the gasoline or the Hybrid version? Will you be in the market soon for a small SUV and is RAV4 on your short list?

Watch why the 2019 Toyota RAV4 hybrid is the top selling car in the united states and click to subscribe to Torque News Youtube Channel for daily Toyota and automotive news.

Thanks for reading everyone. See you next time…