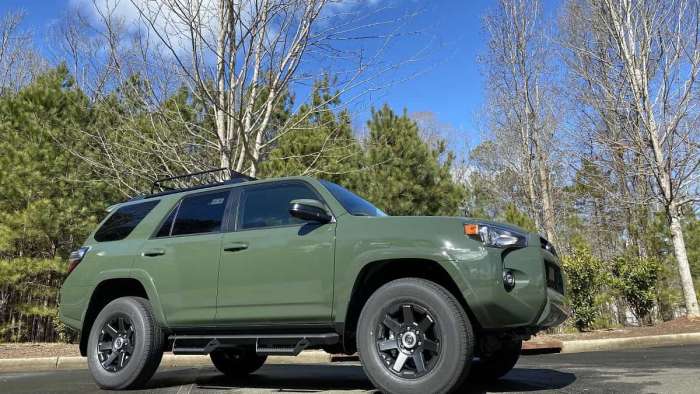 Learn about the one thing fans do not want for the next generation 4Runner. Do you agree?
Advertisement

Toyota 4Runner owners are proud to say they own one of the toughest vehicles on the planet.

With its legendary body-on-frame design, 4Runner is built to withstand harsh twisting and pulling and bending. We look forward to hitting the toughest trails and mountains and rivers with confidence and peace of mind.

In short, 4Runner owners “know what they’ve got.”

This is the time of year when we look to what is coming down the pipeline. This year we will be seeing a next-gen 2022 Tundra. Big news here for truck fans and owners.

And if we discuss Toyota Tundra, naturally we may also wonder about its counterparts too – Tacoma and 4Runner.

Toyota is famously secretive with potential breaking news and updates on new models. Until it is ready to share. We really do not know when Tacoma and 4Runner will be redesigned.

Time to focus on Toyota 4Runner and what is next.

VIDEO YOU MAY ENJOY: Crawl control demo on Tacoma and 4Runner.

All in the last month. Plenty of rumors and speculation. I will believe it when I see it. Next thing I know, you will try to tell me that Darth Vader is Luke Skywalker’s father or something.

We just do not know when 4Runner will be redesigned. Yet.

In the past year I have polled Toyota 4Runner owners and enthusiasts about their “wish list” features for the next generation model.

Fans of my “Toyotajeff” YouTube channel and my Instagram page and my Torque News column have weighed in often on this topic.

For example, listen to what Leo is thinking. “I guess they might wanna keep the same 4.0 for regular models, plus maybe a hybrid system for hybrid models, and a new 6-speed transmission. The biggest change might still occur on appearances and gimmicks though. Really not too much to change in the basic mechanical system unless they wanna risk the reliability and longevity of this perfect truck.”

Digitaldoc wrote. “4Runner is way overdue for a powertrain upgrade. The 4.0L V-6 was a great engine, but needs better fuel economy, and power for the size. The simple engine choice for the next gen is a 3.5L V-6 with the 6 spd. I would like to see a turbo 4, like a 2.0T with an 8 spd that should give us equivalent power with better fuel economy. A nice upgrade would be a 3.0L V-6 turbo for more power, but Toyota is not too ambitious, so doubt that would happen.”

Jason commented. “My bet is the 4Runner will progress into a unibody longitudinal engine platform with RWD, AWD and 4x4 with low range versions non-turbo 3.5 V6 and 8 spd AT. Doesn’t cannibalize Highlander sales. In fact, it’ll be closely related to the Jeep Grand Cherokee which has good yearly sales. For hardcore body on frame lovers Toyota should bring a new Land Cruiser, either the Prado or a 70 series with manual transmission choice. It’ll need it to face the Wrangler, the upcoming Bronco and the return of the Nissan Xterra. The large Land Cruiser 200 series should get a turbocharged Inline 6 with hybrid drivetrain like Mercedes does. Diesels: Toyota diesels are underpowered for US drivers preferences. V8: yes, please keep at least one.”

One thing 4Runner fans do not want

When looking at all the comments and feedback, I began seeing a common theme developing. There was one feature I saw multiple times that Toyota 4Runner fans would NOT like to see when it comes time to redesign our beloved SUV.

VIDEO: Many accessories for your 4Runner.

Nick warned. “Whatever you do. PLEASE don’t make it unibody. Almost every other company has cheaped out with this class of vehicle. Please, don’t kill the six... refine it!”

“Couldn’t agree more. Full frame is a must. 4Runner is last of its kind in this size/class. Don’t cheapen them up with that unibody crap. V6 is solid refine it. 4Runner stands alone one of a kind.” Suggested David.

“4Runner is the last true SUV left. Please TOYOTA do not give us a unibody frame.” Added Kyle.

Glenn was straight to the point. “If the next 4Runner is a unibody count me out!”

Does it make a difference to you if the 6th generation 4Runner is built with a unibody or body-on-frame?

If Toyota changes the frame design, how will that affect whether you buy one or not?

Are there any special features you want, or do not want, for sure?

Thanks for reading everyone. See you next story when I discuss my evaluation of 2021 GR Supra 2.0.