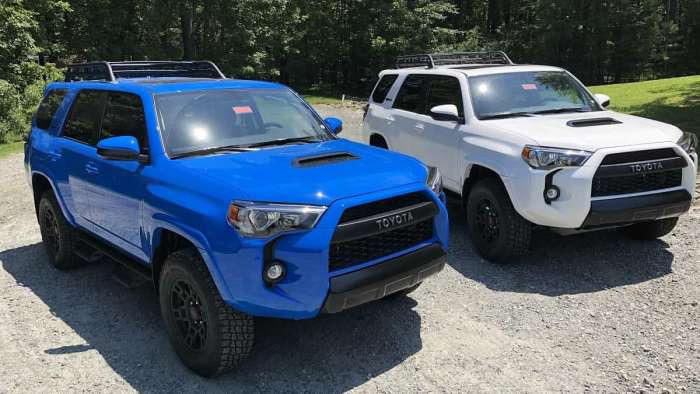 For off-roading enthusiasts, the Toyota 4Runner TRD Pro might just be an ideal choice to take you off the beaten path. See what makes TRD Pro so special.
Advertisement

Among the things in life that are a sure bet, count on death and taxes and The Beatles. You might just want to put Toyota 4Runner in that category as well. This tough SUV has been transporting families both on the road and off since 1984, with no plans for slowing down in sight.

Over the last multiple decades, 4Runner has built a strong reputation for long-term quality and dependability. It is built to last, to borrow another popular tagline for just a moment. Plus it holds its value over time. In fact, the 2019 Toyota 4Runner made the Top 5 list for kbb.com’s 2019 Best Resale Values. On a side note, Toyota Tacoma was #1 overall and Tundra was #3. Pretty impressive, Toyota.

One reason for the current Toyota 4Runner popularity is the TRD Pro grade. This one is a solid choice for truck buyers, not only for its performance benefits, but also for its looks as well.

Toyota 4Runner is designed with body-on-frame construction, which is different from its Highlander counterpart’s unibody design. This means the frame and the body are separate pieces. Because of this, 4Runner excels at off-roading where your vehicle is often up against uneven, rocky, tough terrain. It also performs well in hauling your toys like boats, campers and trailers. The 4Runner has a towing capacity of 5,000 pounds.

The TRD Pro is equipped with many features designed to assist you with more challenging ground. It drives with a 4.0L V6 engine that delivers 270 horsepower and 278 lb.-ft. torque and a 5-speed automatic transmission. Multi-terrain select and crawl control help guide you in low-traction situations. One feature demanded for by loyalists is locking rear differential, and 4Runner TRD Pro owners will be pleased this is standard. Also factory equipped stock is active traction control and hill start assist. 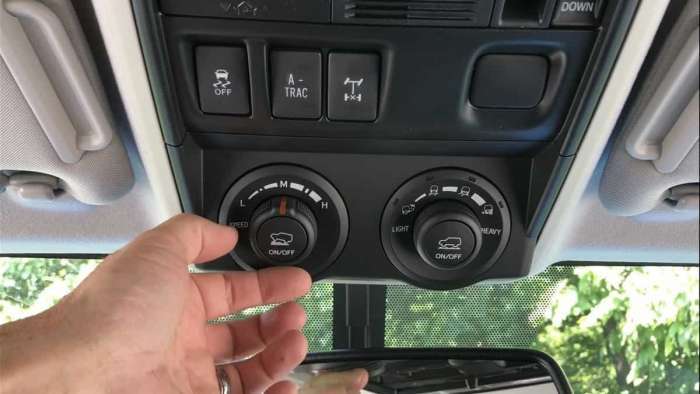 What does TRD stand for?

Toyota Racing Development is Toyota’s performance arm, and it has worked hard to pair the aggressive 4Runner exterior with an equally impressive off-roading arsenal to help you in virtually any challenging terrain. TRD Pro’s suspension consists of oversized TRD Fox high-performance shocks, with remote reservoirs on the rear shocks, and TRD-tuned springs.

We all know wheel and tire size is a crucial element to personalizing your vehicle and making it your own. You might just choose to stay with your stocks rims and tires on the 2019 Toyota 4Runner TRD Pro. Factory Nitto Grappler all-terrain tires give you the best of both worlds – tough off-roading traction but also smooth ride for city streets and along the highway. Combine that with TRD 17-inch unique matte black alloy wheels with red TRD lettering, and you have a tough looking and performing combination.

And now for TRD Pro Interior

The 2019 4Runner TRD Pro is available in black graphite interior with your choice of Super White, Voodoo Blue and Midnight Black Metallic exterior colors. Army Green has already been announced as the 2020 Toyota Tacoma exclusive color. I wonder if 4Runner TRD Pro might have Army Green in its future as well. Time will tell.

GPS lovers can take advantage of Entune Premium Audio, which includes HD radio, SiriusXM, voice recognition commands and integrated navigation. Also standard is JBL premium sound, for the music lover in all of us.

JBL (which, by the way, stands for James B. Lansing, the company’s founder) provides 15 speakers all perfectly placed, along with amplifier and subwoofer, throughout the whole interior to delivery concert-like performance the way original artists intended.

Watch 6 Changes Coming To The 2020 Toyota 4Runner and Subscribe to Torque News Youtube Channel for Daily Toyota and Auto Analysis.

Tell us about your experiences with Toyota 4Runner. What 4Runner do you own? Do you have plans to purchase a new one for either 2019 or 2020?

Thanks so much for reading my stories. I work hard to be your complete Toyota resource. Please bookmark Torque News Toyota for the latest news and reviews. The Toyota pipeline is full. See you in the next story in which I am going to discuss Leasing vs. Financing a 2019 Toyota Tacoma: What You Need to Know.

Ed B wrote on June 18, 2019 - 9:10am Permalink
I'm very interested in the forthcoming 2020 4Runner changes. The only downside will be gas mileage. I've love to see a hybrid version - using the current 2019 system in the Highlander, without jeopardizing HP and off-road capability. I'd be happy if they could just get the MPG to 22/25...
Terry. Leach wrote on September 11, 2019 - 9:52pm Permalink
Would love to have a new car