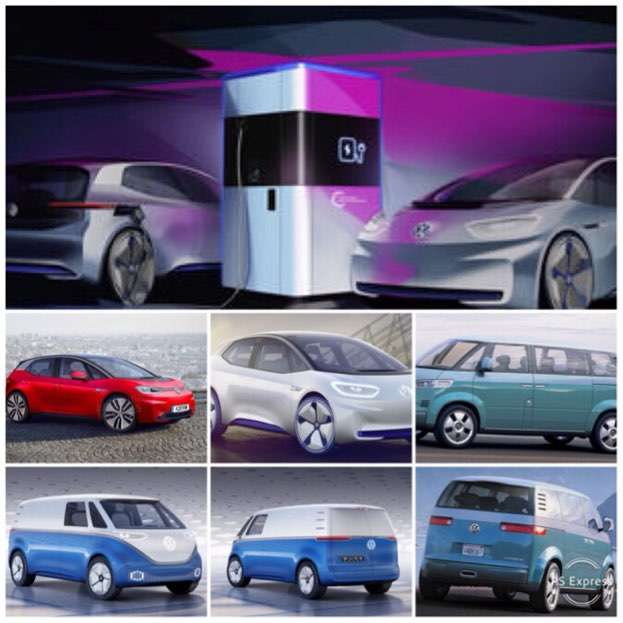 VW's Gigantic Cell Phone Power Bank for BEVs: A Mobile Quick Charging Station is a Juice Pack for Your EV

VW is about to unleash into the BEV wild a really cool mobile charger station that will top the cherry on the ice cream of negating the excuses for range anxiety and city BEV ownership: a mobile power bank that can top off as many as 15 BEVs in as little as 17 minutes. It can be rolled around in a parking lot during events, your boss can have one in the office garage, and it makes a great power source during rolling brown and black outs.
Advertisement

There are few car companies on the planet that have been balls to the wall when it comes to electric vehicles, and ion energy storage, like VW Group. What once started as an impetus from a class action worldwide lawsuit settlement using dirty Diesel, has taken off like wildfires around the globe worth electrification, as VW took the reigns between two worldwide mega charging networks, to spend $2 billion USD of mostly settlement money to help the networks along.

It’s crunch time for the car makers that intend to be leaders in the electric car revolution, companies like GM, Tesla, and VW intend to lead the pack as eventual “electric only” car companies. So to do things like penetrate emerging markets with this new technology, find solutions for customers and owners who have a few more hurdles to BEV ownership than they did when they owned a gas car, provide quick, easy, convenient, and simple charging solutions for BEV owners instead of them leaving off site near empty of charge to find a place to recharge, when instead they can use this device on site:

While additional public charging stations are being baked into the network as they cool off from being fresh from the oven, it’s devices like these that come awfully handy until some of these new or enlarged networks become part of the landscape. The energy put into these stations can be easily transferred to other vehicles or right back to the electric company for reuse. The station itself is designed to be as mobile as possible to access and convenience, or it can be permanently mounted like a charging station who’s source is strictly renewable, like wind or solar. At 17 minutes a full hit, this bank does better than most charging stations already out there, and can do 15 cars at a time.

There are also the intangible things that this power bank does for the industry, the electric car dynamic, for electric cars, and for the future with them. Seeing this being used out of nowhere in the wild, newbies and skittish PHEV hybrid owners will want to break off their training wheels to go full out on BEVs knowning that these kinds of devices exist out there to make BEV ownership a bit more easier to handle.

In VW Group’s press release about this power bank, there were no indication of the group’s intentions to import it to the states, needless to say for such a big company in such a big country shipping in allthese electric cars in the coming months, I’m sure it’ll be here without even asking, that should be a no-brainer.

What do you think of the VW mobile power bank for BEVs?

Let us know below!

Marc Stern wrote on January 4, 2019 - 3:56pm Permalink
Al This technology has to be approved by the right public agencies. The last I heard, the prototypes for something like this were still being considered by the FCC. VW, as most makers, would like everyone to believe they are allowed to do this. However, where they actually operate (in radio frequency spectrum) they are not yet allowed to do (80-90 Hz). If they get to operate there they had better be well-filtered because of the havoc they will create from DC to daylight.
Marc Stern wrote on January 4, 2019 - 3:58pm Permalink
VW, in its attempt to make it seem like this is okay, is also trying to bluff and bully its way into a portion of the radio band where they may also interfere with submarine and other VLF transmissions. It is unclear when/if this will be done.
Al Castro wrote on January 8, 2019 - 8:19am Permalink
Marc thanks for this. If you noticed I didn’t mention when it would be put into production. The source is VW Media but none of the other news sources mentioned what you’re telling me. I believe our readers have a right to know and as I mentioned this technology is the next progression of things to come. Look, the cars aren’t even here yet so I don’t think we can hold them to their word about anything until we first see electric cars in dealer lots. Marc thanks for your concern.