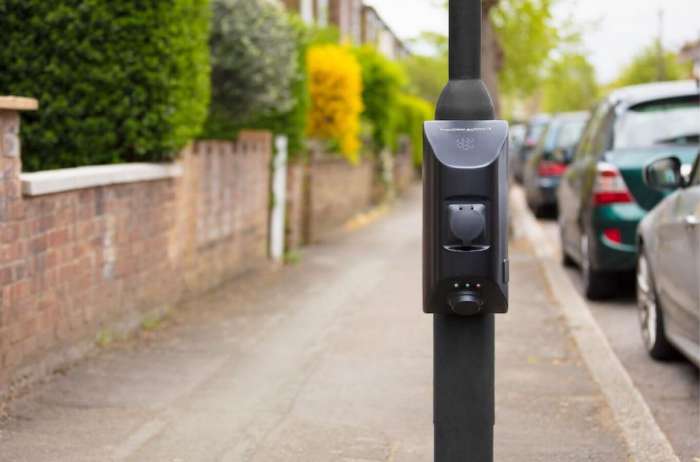 Electric car ownership will remain a charging station sticking point for urban and apartment dwellers, as fingerpointing tries to blame who is responsible for setting up public and fast charging stations across the US. In the UK, local governments are requiring the installation of open access points for public charging. This is the kind of charging where a payment method is not required on demand at site. A UK EV charging company called char.gy is about to change all of this on both sides of the big lake.
Advertisement

Mr. Richard Stobart is, at least by this American reporter’s standard, a cosmopolitan Londoner who just wanted to get on the EV bandwagon by buying an electric car and go green like his British peers are. But as he contemplated an electric car purchase, he realized that London street parking would make it a challenge. “When you buy a laptop,” Mr. Stobart tells me with CEO certainty, “you don’t think about where to plug it in. The same thing should be for these electric cars.” There was no way to have a place or time to charge the car between work and home. He became frustrated.

The ideal place to have an electric car is in the big city, but unless you have your own house with a garage and a charging station or have or make tons of money, how can anyone keep and take care of an electric car in a city? Mr. Stobart forewent buying an electric car until recently, because he had to take care of his necessity, so it may first become the father of his invention: why don’t they make chargers out of all these lamp posts on the street? Wouldn’t they save money doing that in the first place?

Mr. Stobart, entrepreneur and the founder of char.gy, recognized early in his startup some of the biggest sticking points that shouldn’t be to anyone buying a BEV: an apartment building, any urban setting, confined street parking usually overnight, or doesn’t belong to a network charging subscription plan or not even a network of chargers, for that matter. Mr. Stobart saw that these issues make living with a BEV more difficult in a city, that it’s often a deal breaker to get one. And if there’s any other place where it’s getting more critically important to eventually get one in lieu of a fossil motor car, it’s in the urban setting. Most large cities across the globe will eventually ban new gas car sales, already have congestion pricing to alleviate carbon, and eventually have super tight emissions rules that London already has all these anti-fossil features in place.

So what’s an urban hipster like Stobart and his friends to do if they want an electric avenue for BEV ownership other than car share? The London startup char.gy seems to have found the answer: putting public access charging stations right on the street lamps! Char.gy invented a charger box that can easily install on a street lamp so that EV urban parkers will be able to charge right on the streeet.

This is a game changer. Easy installation: instead of ripping up soil, sidewalks, asphalt, electrical lines and present infrastructure to install new charger stations, all that’s needed here is a minor cut, drill, snip, and screw. Easy to process: a selling point to char.gy’s charger point is that operation and payment is done through a cell phone and app, so there’s no need to take out a wallet. It’s universal: no fast charging applies here, but this is better than your EV just parked on the street and you can’t take it anywhere because you can’t find a station! And any car can use the network, whether you drive an electric Rolls Royce of the future to leave it vandalized on the street while unattended and charging , even present Tesla owners can use it if needed in a pinch! Its safe and secure: once charging is ready to begin the plugs lock onto each other until the owner retrieves them when they’re finished. There’s a 24/7 line with a response team if necessary, in case either you or say, the police can’t unlock the plugs and need to, like when your car is being towed for parking violation or scofflaw enforcement. Or you didn’t pay your charger network bill . . .

Mr. Stobart says his company is working on getting the stations to Canada and the US by the end of next year. Street lamp charger proliferation is now underway in the UK he says, while he and regulators work out minor sticking points, such as the legality of tapping into electrical lines.

You think lamp post charger stations are a good idea? Let us know in the comments section below.

DeanMcManis wrote on July 25, 2018 - 2:40am Permalink
It is clever, and an obvious solution. Interestingly, our nearby public parks currently have regular 110V outlets on the light poles now. Of course 110V is seriously slow to charge up a car, and for others who have discovered the public plugs, you will often find people sitting in their cars and plugging in their laptops or phones. it would be very nice to have 220V plugs available as well because several inexpensive plug adapters are now available with a NEMA 6-20 ( Dryer plug ) a long cable and a J1772 - EVSE (220V-240V) Type 2 plug for the car. As far as stealing the cable goes, I know that both my Volt and ELR sound an alarm when you are charging and the charge cable gets pulled out without the proximity key fob being nearby. But there are many city neighborhoods where I would not want to risk it. Still the Type 2 lamp post charger is a good idea, and hopefully we will see them here soon as well.
Nick wrote on July 25, 2018 - 9:29am Permalink
This type of an EV Charger has been a thing in some areas of the UK for a little while. The street lamps used to be sodium lights which need three phase power. They have since been replaced with LED low energy lights so all the posts are wired with three phase for no useful reason. Well, that's handy!
Richard Stobart wrote on July 25, 2018 - 10:34am Permalink
Actually most lampposts in the UK have 240V 25A single phase power. We are the first full charge point that is able to attach to lampposts and use their spare power.
Willem wrote on July 25, 2018 - 9:54am Permalink
All these fine ideas bring us to wonderful solutions. As long it is in the benefit to EV’s.
Al Castro wrote on July 25, 2018 - 2:02pm Permalink
And thats the point to all of this, thank you Willem!
Ian wrote on July 25, 2018 - 9:54am Permalink
These EV chargers are all over London. In our burgh, you just have to nominate three street lamps and they get installed.
Jeremy wrote on July 25, 2018 - 9:55am Permalink
Char.gy's lamp chargers would be slow chargers unless they heavily beef up the infrastructure. Considering they want street lamps here to be LED, there isn't very high amperage feeds going to the poles. They may not be 120V or 220V either. Could be 277V.
Richard Stobart wrote on July 25, 2018 - 10:36am Permalink
In the Uk we can run the chargers at 5.7kW. Generally residents use them outside their houses and charge up overnight so there is plenty of power. It isn't great if you are driving by and need a quick top-up.
Al Castro wrote on July 25, 2018 - 2:06pm Permalink
Mr. Stobart thanks for answering my readers’ questions. I rewrote the whole article as you can see. If any changes are required please let me know, and if you don’t mind, please hang around here for any good questions they may have I’d immensely appreciate it thanks!
Joe wrote on July 25, 2018 - 11:13am Permalink
In the US, most street lamp lighting is from the main line of 208V, which is way better than 120V for charging! It’s considered level 2.