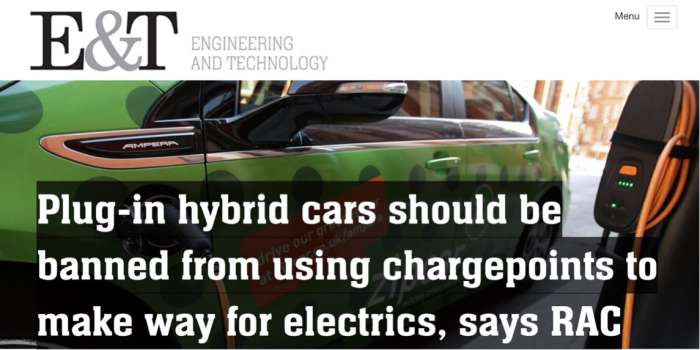 While Tesla and Electrify America sweep themselves across America’s interstates upgrading the supercharger networks, other networks with their superchargers elsewhere, incompatibilities between PHEVs and BEVs that may have been initially overlooked, are starting to become clear: PHEVs are incompatible with superchargers, and while the UK looks to ban them from superchargers, US car makers may already be taking care of the PHEV problem by just outright getting rid of them.
Advertisement

It hasn’t been looking good for the PHEV lately as car manufacturers like Ford, even GM have cancelled a slew of them, even the storied iconic Chevrolet Volt, as GM, VW Group too, are switching supply chains and accelerating their plans even further to rid themselves of most of their gasoline cars in their portfolios in five years. But glaring problems with PHEVs are becoming even more obvious with the Electrify America build out and with Tesla’s network upgrade, if it ever becomes public, that complicates life for the PHEV: 5-40 minute supercharging is incompatible with PHEVs. Because of their older ECU and computer nodules that it takes twelve times as long to recharge a PHEV than a BEV at a supercharger, a push back is intensifying to ban them from supercharger networks in the UK. US car makers on this side of the lake and on the other end of the problem seem to have found another approach as a solution:

As the nation’s some 14 charger networks continue their sojourn of proliferating new stations and chargers while some upgrade their superchargers, car makers around the globe are ramping up their factories and switching supply chains to get ready for the massive incursion of battery electric vehicles coming, the first onslaught in 2019, the electric tsunami, in 2020. You would think that it would be counterintuitive for a carmaker to slay a hybrid from their portfolio, but that’s exactly what GM, even Ford, a company that hasn’t done well with electric cars so far, are doing.

The latest technology being installed into supercharging networks allow supercharging capable BEV only vehicles to recharge 80% of their range in as little as 5-10 minutes. That means an empty pack whose battery went dead can recharge in 5 minutes and get 15 miles of range. Because of older technology hybrid vehicles being incompatible with this new technology with their ECU and computer control nodules, this process would take much longer to achieve the same result.

Based on a report given to trade publication Engineering and tTechnology, “However, because of the limitations of their on-board control units, it will take almost all plug-in hybrids an hour or so – twelve times as long – to achieve a similar result. This mismatch means that expensive, high-specification equipment which is essential to battery-only vehicles on long journeys could be blocked by other, slower-charging vehicles.” Those slower-charging vehicles also have much shorter ranges. Even for short range BEVs like the Nissan Leaf, double supercharging on the same trip is not recommended which would lead to another form of drip charging in fail safe mode, as the batteries become way too hot to handle both highway speeds and immediate supercharging.

The RAC, which is the US equivalent to the AAA, and from which AAA members can redeem reciprocal benefits, recently recommended banning them from supercharger stations in the UK. Speaking to a magazine Engineering and Technology, RAC Foundation director Steve Gooding said: “Ever-faster and more powerful chargepoints might sound like the answer to creating the electric car recharging network we need, but if the cars themselves can only be recharged at a certain rate then at best we’re going to be disappointed and at worst we’re going to waste money. Compatibility between car and charger is key.”

Since the inception of the electric car revolution in 2008 with the factory roll out of the Tesla Model S, not one non-compliant battery electric car in the US by any car manufacturer has been cancelled in production since. Manufacturers have canceled scores of hybrids.

Banning PHEVs? What do you think? Let us know below!

LG's New EV Battery Plant Is a Welcome News for Tesla
Tesla Giga Berlin's New Hurdle: It's Not Only the Gov't, but Now Tesla Itself
END_OF_DOCUMENT_TOKEN_TO_BE_REPLACED