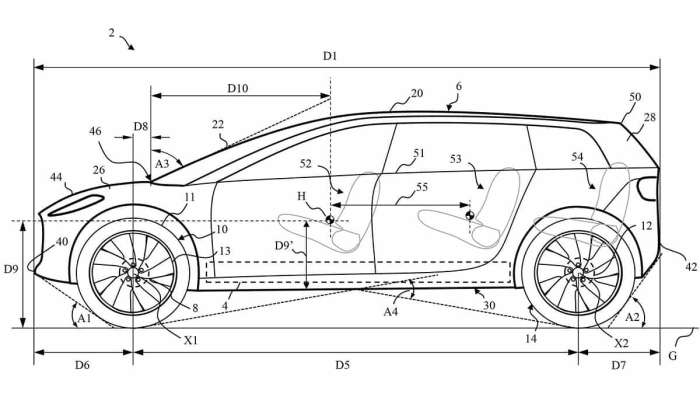 Giant vacuum maker Dyson Electric files an electric car patent and the drawing shows a more practical SUV. Dyson even revealed the date when its electric SUV will go on sale.
Advertisement

Last year Dyson showed it means EV business. Vacuum now electric car magnate tycoon Sir James Dyson finally filed an Electric Vehicle Patent for his 2021 BEV SUV, the first of a trio of vehicles. It’s rakish, like Model Y, but has a more practical wagon-like rear, something I’ve criticized Tesla about not having. It’s clear from the design specs that regardless of comparable size difference if there is, that the Dyson looks like a more practical SUV.

Something else the storied appliance maker will capitalize over Tesla to give it a run for competition, is that it will be the first production vehicle that’ll have solid state batteries, the next step in battery technology. These batteries are a much improved step over ions, as they last longer, are even more reliable, and more importantly give even greater range than lithium ions. This will be a substantial game changer.

Be prepared however, for there to be a price difference for the technology. The Dyson magic carpet ride goes on sale as early as late 2021.

According to Car and Driver "if Dyson does move forward with an SUV-like design, we expect all-wheel drive, two electric motors, and enough battery capacity for at least 300 miles of driving range."

Bloomberg reported that in an email from Dyson to his staff, Mr. Dyson indicated that new design changes are likely to happen before 2021 reveal date and that 500 people are working on the project.

AutoWeek reporter Graham Kozak doesn't see anything extraordinary in Dyson's electric SUV filing. "We’re struggling to identify anything particularly revolutionary about the vehicle described by these illustrations. With wheels pushed out to both ends, a raked windshield and an interior volume-maximizing two-box configuration, it reminds us of a three-row Jaguar I-Pace with extra rear headroom," her writes.

Clean Technica reporter Steve Hanley thinks that the electric motors Dyson uses will be technically superior to and more efficient than those used by most other companies.

Apparently Dyson is going to build it's SUV in Singapore and has allocated more than 3 billion USD to the project. What do you think about Dyson's electric SUV plans and how do you think the EV marketplace will change in the next 10 years? Please, share your comments below in the comments section for discussion.