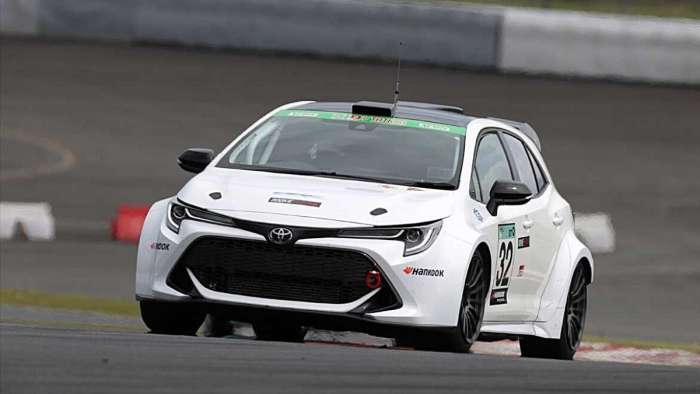 Building a hydrogen burning, turbocharged, internal combustion engine powered, concept race car correctly answers all of the wrong questions, if Toyota wants to build a vehicle that will be a better competitor to EVs and gasoline powered cars.
Advertisement

While it is fun to see a racecar running off of hydrogen gas, this move is actually going backwards in the goal of making hydrogen competitive with EVs and gasoline powered vehicles.

The two biggest drawbacks for hydrogen for use in consumer automobiles are the relatively high price for green hydrogen, including production, transport and storage and the comparatively tiny distribution networks of hydrogen stations today. The reason why I say that this racecar demonstration is a move backwards is that hydrogen burned in an internal combustion engine (ICE) operates at thermodynamic efficiency level of around 20–25% (a little less than gas engines), but modern fuel cells operate at more than 50% efficiency. And importantly, burning hydrogen produces high nitric oxide (NOx) emissions like other burned fuels.

In contrast, BEVs work between 80%-90% efficiency, depending on the source of the electricity, and electricity is available in everyone's homes today, and EVs can be charged by the sun. Ironically, the first internal combustion engine (in 1806) used hydrogen and oxygen as a fuel.

The original Mazda Wankel engines burned hydrogen. And BMW had a cool prototype car called the Hydrogen 7 in the early 2000s, which burned hydrogen as a fuel. So burning hydrogen is nothing new, but it also doesn't improve hydrogen's issues of high price and poor distribution today.

My thoughts are that the best chance for hydrogen powered consumer vehicles to succeed is to make them plug-in hybrids.

This solution has been overlooked by Toyota, Hyundai, Honda and other hydrogen automotive backers so far. But all current fuel cell EVs (FCEVs) already use an electrical battery to buffer the electricity produced by the fuel cell. And the automakers simply need to increase the buffer battery size to provide maybe 50-100 miles of BEV range, and support DC fast charging to dramatically improve FCEV's appeal with very little additional cost.