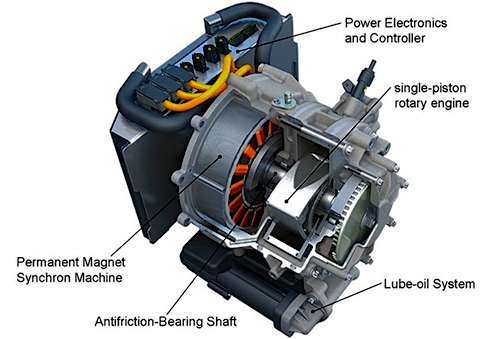 Mazda is known for its handling and its quirky insistence on the Wankel rotary motor it acquired from the Germans decades ago but not for its alternative energy use. It seems the company is still not ready to let it go but willing to try something new.
Advertisement

Mazda is facing a serious challenge with a growing deficit to gain a profit in less than a year. In order to do this, Mazda wants to adapt its rotary Wankel engine to hydrogen and slap on an electric generator turning it into a hybrid drivetrain. It seems a week ago I was wondering why the perfect plug-in hybrid, PHEV solution hasn’t hit the showroom yet, Mazda could bring us closer to it http://www.torquenews.com/1079/ideal-alternative-energy-car-just-wont-happen . Certainly burning hydrogen is much more efficient than letting it interact with expensive silver and release its water and oxygen molecules. In this instance, the rotary engine is better suited for hydrogen than it is burning gasoline.

Mazda Rethinks Its Electric Strategy. Mazda would seem to be the perfect company for electric cars, EV and plug-in hybrids. However, the company has consistently played down the viability of electric cars and renounced ever making them. But profit dictates direction and loosing that much money, the company has no choice but to act quickly.

This is a quite an unexpected turn the company is taking. It has spent a lot on R&D with its new and impressive SkyActiv injection system that can boost compression as high as 16.1 with direct injections (two per cycle) and a turbo. The technology Mazda developed pushed the efficiency of the internal combustion engine to levels we only see in prototype racing.

Technically Speaking. While it could use almost any types of fuels, much as a turbine can, tweaking a rotary Wankel engine to use hydrogen instead of gasoline makes sense. The rotary engine would be coupled to a generator resting on a anti-friction bearing shaft driving a generator. Another positive aspect of this setup is that only one piston could be used and not the traditional two.

All in all, Mazda is using its already proven Wankel engine and by optimizing it at a steady speed with hydrogen, it could make it very efficient but it compete against BMW’s Hydrogen 7’s concept that uses traditional pistons for the same purpose.

The real problem is not using hydrogen, although burning it makes more sense than storing for an eventual energy transfer. The trick is manufacturing it, compressing it and stocking it in an efficient way, something that hasn’t been completely worked out yet. If Mazda plays its card well, it could be the only and first carmaker to use hydrogen in a hybrid and plug-in hybrid and truly give us a unique but efficient choice of car.

David Martin wrote on July 7, 2012 - 3:12am Permalink
'Certainly burning hydrogen is much more efficient than letting it interact with expensive silver and release its water and oxygen molecules.' Fuel cells use platinum not silver and are up to 60% efficient, around twice the efficiency of burning hydrogen in a combustion engine, whether a Wankel or other.
Nicolas Zart wrote on July 7, 2012 - 1:36pm Permalink
You're right David about the platinum. I somehow fixated on silver. However, the 60% efficient is only when you take into consideration the engine itself. Granted it is 30% more efficient than a conventional gasoline engine, the new ones are catching up. The problem with hydrogen is when you take into consideration production, compression, storage, delivery, then finally returning electrons back, the equation has a lot that needs to be solved before being feasible. I saw gasoline car projects that mixed hydrogen with fantastic results. Someone, fuel cell seems to me as trying to make a square wheel work. I guess with enough energy and funds, anything is possible. Thank you, Nicolas