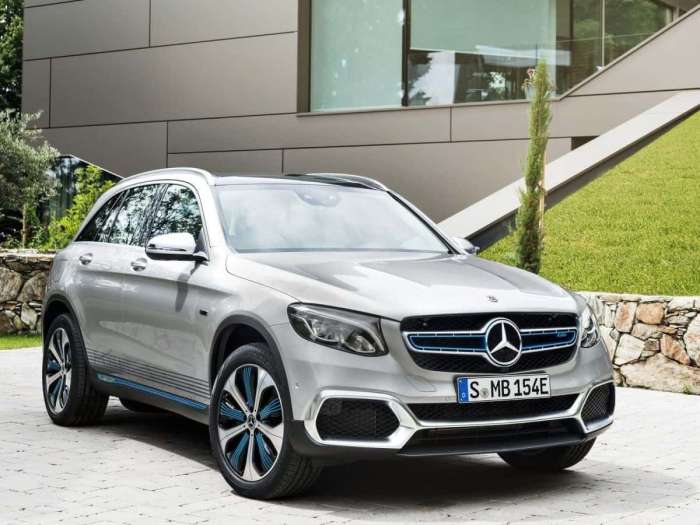 Germany is serious about building zero emissions vehicles as demonstrated by Mercedes new GLC F-Cell crossover, which will be on sale in several cities in Germany by the end of this month. The introduction did not mention the U.S. market, but there shouldn’t be any reason why we wouldn’t see this fuel cell hybrid here within a year or so after the German release.
Advertisement

BMW actually showed working hydrogen cars over the past few years, with a plan for production cars, but delays probably mean that we will not see them before 2021. Their plan was to partner with Toyota, but development has been slow going. And even if BMW had a competing fuel cell model out now, the new GLC F-Cell is still a smarter choice because Mercedes has designed a production fuel-cell/plug in hybrid.

Mercedes offering a plug-in hybrid, fuel cell vehicle is very smart because it addresses the number one drawback to hydrogen adoption in cars today. Currently there is a very limited refuelling infrastructure anywhere. In the U.S. there are a tiny handful of hydrogen stations in California and the north-east, with about the same number in Germany and Japan. Daimler is planning to have 100 Hydrogen stations in Germany by the end of next year, and they are planning on having over 400 running by 2023.

But with Mercedes building a plug-in EV, which has a fuel cell backup means that most people can recharge their batteries overnight, and only use hydrogen for longer trips. Refuelling hydrogen only once every month or two.

The new GLC F-Cell has 297 miles range, 31 miles on just the batteries. It will have a hydrogen fuel cell with a 4.4 kg tank up front under the hood, as well as a 13.5 kWh lithium-ion battery pack. Both providing power for the 208 hp electric motor at the rear axle. Being a plug-in means that the 31 EV miles can be recharged any time. And Mercedes says that plugged in at your home, you can recharge the batteries from 10-100% in 1.5 hours from standard 220V house current. So for drivers with a shorter commute they can drive on plug-in electricity without ever having to refill the hydrogen.

Fuel cell cars in the U.S.

Japanese automakers were the first ones to actually lease and sell fuel cell vehicles in the U.S., with Honda’s Clarity out first, and then Hyundai offering 500 fuel cell Tucson SUVs for lease. Recently Toyota offered their Mirai for lease and sale, and they have delivered more hydrogen FC cars here than any other manufacturer, including Honda’s new Clarity FC.

In addition to the Mirai and Clarity FC, later this year Hyundai will follow up on their fuel cell Santa Fe with an all new Nexo CUV which will be the only hydrogen-powered utility on the market, and its EPA-rated range comes in at 380 miles combined from the 6.3 kg of compressed hydrogen it carries in three tanks. That’s higher than the 366 miles of the Honda Clarity Fuel Cell.

One thing that is unique on the Nexo is it’s much bigger onboard battery. The actual traction batteries in the Mirai and Clarity really just work as an electrical buffer from the fuel cell generator to the electric motors, and they are relatively small (under 2Kw), but the previous Hyundai Tucson FC was a much larger at 24Kw, and this new Nexo has a whopping 40Kw traction battery.

Now it could be that they just wanted to add to the overall driving range with the big battery, but it very well likely be that Hyundai has future plans to reveal that the Nexo was actually engineered to be a plug-in hybrid from the beginning, which would give it a distinct advantage compared to the regular fuel cell cars, regardless of their generous hydrogen driving range. But guessing about future products only goes so far. Whereas Mercedes is showing without hesitation that their upcoming GLC F-Cell will be a plug-in hybrid CUV by design. And we really only have to worry about when it is coming to the U.S.