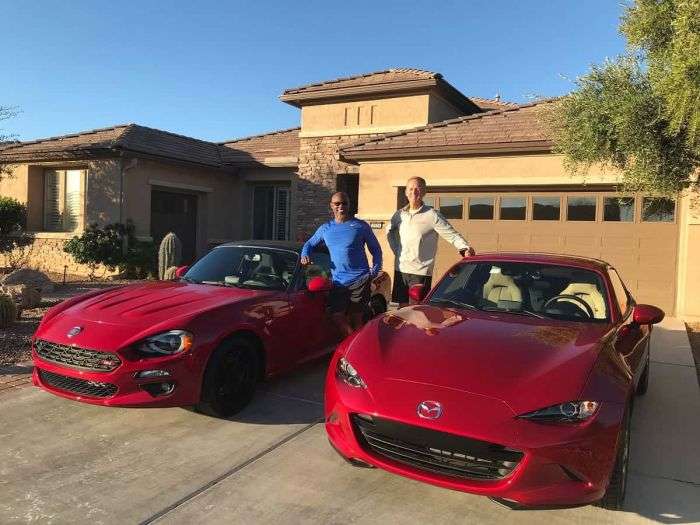 This is two days with a FIAT 124 Spider and Mazda MX-5 Miata RF on Route 66. Joined by other roadsters, the new kid on the block and the best-selling two-seat sports car put their sibling rivalry aside and hit the iconic Route 66 in western Arizona.
Advertisement

After nearly 1,000 miles - including getting to the start point, Lake Havasu City, and driving home from the end point, Winslow - The Cochise County Roadsters Route 66 drive across western Arizona recently came to a conclusion.

Driving home from the FIAT of Scottsdale [Arizona] dealership in my new FIAT 124 Spider last June, I knew I would be making a drive along Route 66 in the near future. Along with driving Highway 1, the Pacific Coast Highway, in California, driving along Route 66 has long been a dream. Now I had the perfect car. For many car and history enthusiasts, driving Route 66 epitomizes the American road trip. I can’t think of any other road which has captured the imagination of drivers and the essence of the American spirit the way this 2,448-mile road has. From classic movies, 1940s The Grapes of Wrath, to the 2006 Pixar movie Cars – I’ve seen them both – this particular road is immortalized in the American consciousness.

The 2,448-mile road was designed to be the first trans-continental, year-round highway. Stradling eight states and three different time zones, the famed highway once connected urban and rural America from Chicago in the East to Los Angeles in the West. Unfortunately for those who made their living providing various goods and services along the route, President Eisenhower’s 1956 Federal Highway Act changed everything. The bigger, newer and faster four-lane interstate system, I-40 here in Arizona, bypassed Route 66 and was the beginning of highway’s demise. By 1985, Route 66 was decommissioned and officially ceased to exist. Today, only about 80% of the road has survived. Fortunately for me and members of the car club I started, the Cochise County Roadsters, the longest stretch of old Route 66 survives in western Arizona.

Soon after starting the club to bring together roadster enthusiasts I began planning the Route 66 drive with a friend. Our original plan was to drive the entire width of Arizona. Unfortunately, I-40 has largely subsumed Route 66 in the eastern half of the state.

Ultimately, we settled on a three-day drive, starting in Lake Havasu City and ending in Winslow. Yep, that Winslow, the one the Eagles sang about in Take it Easy:

Well, I'm a standing on a corner
In Winslow, Arizona
And such a fine sight to see
It's a girl, my Lord, in a flatbed
Ford slowin' down to take a look at me

On Friday, April 13th, undeterred by the ominous date, we set off for Lake Havasu City. Although a little windy, the overall weather was pleasant and we enjoyed the six-hour drive from our home to the starting point. Meeting up with the other drivers that evening at Barley Bros. Restaurant & Brewery, we enjoyed wood fired pizza and hand crafted micro beer.

Saturday morning, we set off for Oatman, the first stop on our drive. Located just across the Colorado River and up the hill from Laughlin, Nevada this one-time gold mine boomtown briefly turned into ghost town and now is a well-known tourist stop. As advertised, we encountered lots of souvenir shops and saw the town’s famous wild burros roaming the brief stretch of Route 66 that passes through the middle of town. 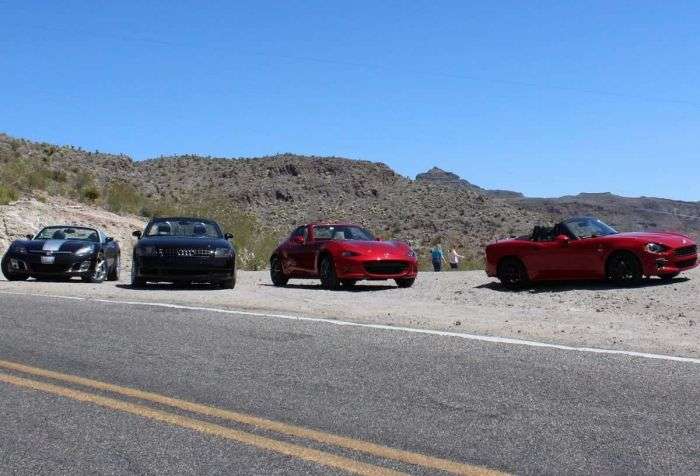 Roadsters taking a break and enjoying the views at Sitgreaves Pass

Back in the cars, and about five miles later, we found ourselves at Sitgreaves Pass. At this point between Oatman and Kingman Route 66 rises to a peak of 3,550 feet as it breaches the Black Mountains. Heading downhill our modest car club came across a 25-strong corvette car club winding their way up the curvy road.

Another four miles down the highway we found ourselves at perhaps my favorite stop along the way, Cool Springs Station. This restored service station has a 1930s vibe and provides a nice connection to travelers past. Unfortunately, one of our members - Jim in his Audi TT - failed to successfully navigate over or around a couple rocks that had fallen onto the highway a couple miles before the service station and pierced his transmission case. Terrible luck! The grisly discovery was made soon after the picture below was taken. After a couple phone calls to arrange for a tow to Kingman, the group determined there wasn’t much we could do to help and we headed on down the highway to Kingman with one less member. 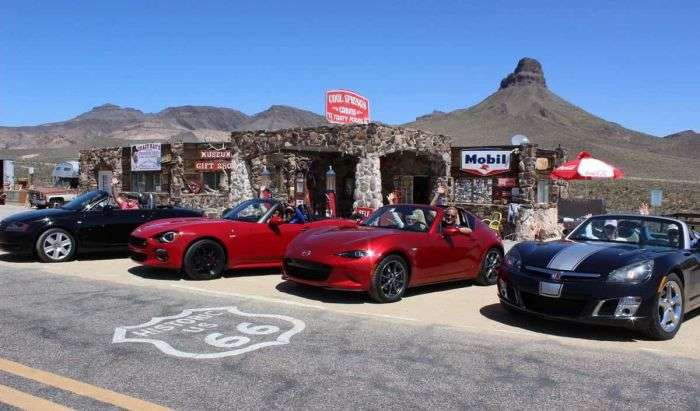 Twenty miles later we found ourselves in Kingman where we visited the Powerhouse Route 66 Museum and grabbed some lunch at a 50s diner across the street. The museum had lots of interesting displays, everything from memorabilia and photos to life- sized dioramas depicting the travel and travelers along the famous route.

Our last visit before heading to Williams, where we crashed for the night at The Lodge on Route 66, was in Hackberry where we checked out a lot of classic memorabilia at the Hackberry General Store. In addition to all the signs, mementos and artifacts from the 1940s through the 1960s in the store, there are many vintage cars outside.

Also known as the “Gateway to the Grand Canyon,” Williams was the last town on Route 66 to be bypassed by I-40. As with earlier stops in the day, there were a lot of Route 66 themed buildings and store fronts to see as we walked the historic downtown district to find some dinner and stretch our legs a bit after 218 miles on the road. 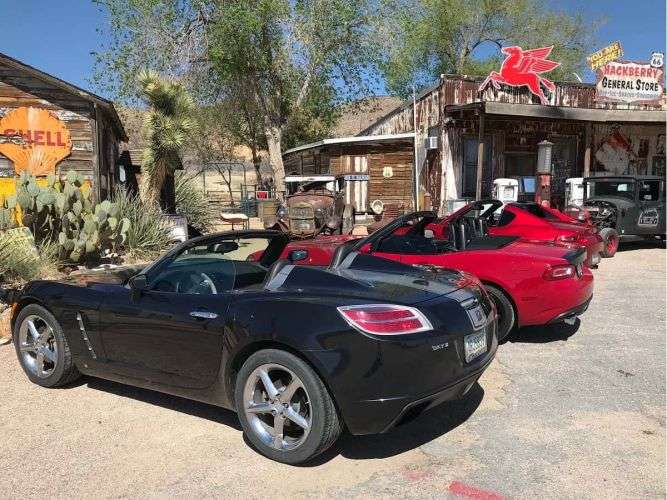 Lots of memorabilia and vintage cars at the Hackberry General Store

After a rather uninspiring continental breakfast on Sunday morning, we were back on the road and headed to Flagstaff, combining stints on I-40 and Route 66 when available for the short 34-mile drive. Located in the high-country mountains of northern Arizona, 7,000 feet elevation, we took advantage of the great weather and explored Flagstaff’s nostalgic Route 66 buildings on the self-guided historic walking tour. Just as they were opening, we found ourselves at Beaver Street Brewery, Flagstaff’s first brewpub, where we enjoyed an early lunch.

Following lunch, we were back in the roadsters and on the road for the 43-mile drive to Meteor (Barrington) Crater. Located just off I-40, the world’s best-preserved meteorite impact site is the result of a collision between an asteroid traveling 26,000 miles per hour and Earth approximately 50,000 years ago. Out of the cars, we took advantage of the opportunity to see more of the crater on the hour long guided tour of the nearly one mile across, 2.4 miles in circumference and 550 feet deep landmark.

The last stop on the Route 66 drive was Winslow, 25 miles from the crater. Before checking into the historic La Posada Hotel, we visited the famous corner in Winslow, and along with a few other tourists, took pictures of the Route 66 road marker, the flat-bed Ford and the “Standing on the Corner” statue. 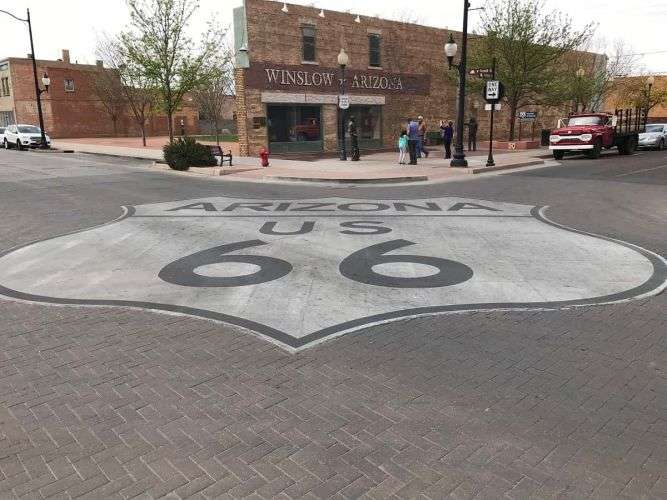 The iconic road marker, statue and flat-bed Ford in Winslow

Cocktails in the back courtyard and then dinner in the Turquoise Room capped the evening and the Cochise County Roadsters Route 66 Drive. The drive was quite memorable. Every member of our club agreed that there is no better way to experience the classic American road than in a roadster with the top down and the music up. The sights, sounds and experience won’t be forgotten anytime soon.

Gage wrote on April 17, 2018 - 4:30pm Permalink
As James clearly pointed out, this was a bucket list road trip, especially from the open air cockpit of our ‘17 Miata RF! With his “re-mapped” engine producing significantly more horsepower than my RF, he graciously accelerated slowly each time he led the pack!
James Molet wrote on April 17, 2018 - 8:07pm Permalink
Indeed, if I didn't have to wait for Gage and his RF, it's likely I could have finished 1.45 days earlier! But seriously, while I understand the desire to compare the two vehicles and pit them against each other, for me it really is a case of both are great looking - in different ways - and great performing.
Mr. Groovy wrote on April 18, 2018 - 3:34pm Permalink
I love it, James. My high school buddies and I are going to a Notre Dame football game this year for a bucket-list adventure. Perhaps next year we'll forego an iconic sporting event and instead opt for the open road. Nothing more iconic than Route 66. Something every red-blooded American male needs to have on his bucket list. Cheers, my friend.
James Molet wrote on April 18, 2018 - 8:31pm Permalink
I can't recommend it highly enough, my friend. Get three or four good friends together, rent some roadsters if necessary, put the tops down, turn the music up and enjoy a unique piece of Americana!
Cal wrote on October 23, 2018 - 1:16pm Permalink
I loved the article. This past June, I drove from Calgary AB Canada to the Atlantic Ocean, and back, in my 2017 124 Spider Abarth. That was about 1000 kilometers per day (600 miles), for six days out, four days of rest and relaxation, then six days back. On the way east, I first cut south to Montana, and then east along the Interstates until I hit Michigan. Then, to avoid toll highway hell, I headed north again and cut across the border back into Canada at Sault Ste. Marie. But I digress... next summer I want to do a more leisurely drive, and the road trip you wrote about sounds like a perfect fit. So, by any chance do you have a more detailed route plan/itinerary that you could share so I could replicate your adventure?
James wrote on October 23, 2018 - 7:49pm Permalink
Your road trip sounds like a great time! Contact me at [email protected] and I’ll send you the itinerary/guide I created and sent to club members for the drive.