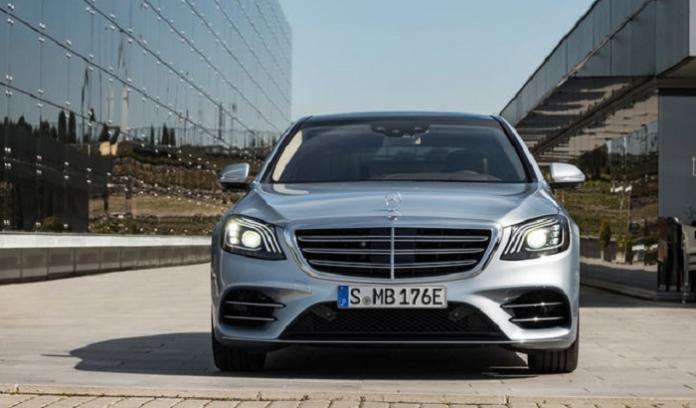 Mercedes has unveiled a new plug in hybrid at the 2017 Frankfurt Automotive Show. Some of the specifications of Mercedes S 560e are impressive putting it in direct competition with Tesla Model S.
Advertisement

The S 560e is an improvement over Mercedes current plug in hybrids and a step towards the future of Mercedes electric program development, which has been making huge strides recently with the help of parent company Daimler, who have been aggressively pursuing electric vehicle development themselves in commercial applications.

The S 560e’s third-generation hybrid transmission based on their standard 9-speed automatic transmission meshes 367 hp from its 3.0-liter twin turbo V-6 engine with an electric output of 90 kW or an additional 121 hp. Making a combined total of 488 hp to boot, which should be more than enough power to propel the sedan from 0-62 mph in around 5 seconds. The battery is a 13.5 kilowatt-hour pack increased from 8.7 kwh previously used in Mercedes Hybrid vehicles, but Mercedes’s has managed to not increase its physical size while still increasing its capacity. The battery is now coming directly from their parent company Daimler. And Mercedes claims an all-electric distance of 30 miles. The S 560e is supposedly equipped with fast charging ability, although no stats were given about it to confirm.

This new S Class Mercedes strengthens Mercedes' resolve to bring electric into the luxury market. Adding to the two hybrid electrics currently offered by Mercedes and the one full electric vehicle currently available in their lineup, it certainly seems Mercedes is keen on competing in the luxury electric market with Tesla, Audi and BWM.

Who is the S Class designed to compete with? Well I think that’s right in the name S, the Tesla Model S looks to me to be a comparable competitor, or a minimum is at least where Mercedes is aiming in the future. They may not see full electric on the scale of Tesla for another few years but Mercedes is certainly getting ready to do just that.

The current Mercedes all electric B Class is competing with other small electric hatch’s like the Nissan Leaf and Chevy Volt, as well as the BMW i3. They must have seen the sales numbers and interest they hoped for in their B Class as they continue to expand their electric endeavors. I see the B Class as a strategic marketing maneuver on Mercedes’s part to test the all-electric waters before going after the true king of electric and specifically luxury electric, Tesla.

As well as Audi’s new all electric luxury vehicle, the Sportback, poised to make a leap onto the market to compete with Tesla and others. Mercedes will be under even more pressure to develop their all electric platforms to compete with their neighbors at home and abroad. The electric future is looking bright.