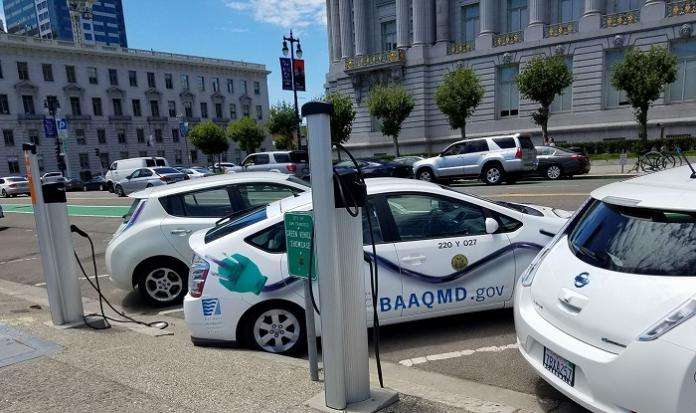 Most would say no, not by a longshot. Tesla owners are probably ok, especially Model S & Model X owners since they get 1000 miles work of free supercharger access. It is everyone else that may find it hard to find an open EVSE once the public starts buying EVs in mass.
Advertisement

Those of us who own an EV with a more limited range such as myself might have a hard time finding an open charging station once all these Tesla Model 3’s and Chevy Bolt’s are on the road.

Companies such as Chargepoint are expanding in area where there are currently few charging stations. Since getting its start in 2014, the ChargePoint Arizona team has grown by approximately 800 percent and invested more than $10 million in the area. As ChargePoint deepens its commitment to the region, it continues to invest heavily in jobs for the local community.

“The shift to electric mobility generates many benefits: cost savings for drivers, new marketing tools for businesses and significant environmental savings,” said Pasquale Romano, President and CEO, ChargePoint, Inc. “The explosion of jobs related to electric mobility is too often overlooked, but our expansion in Arizona, Europe and around the world reflects that the transition to electric mobility is well underway and represents a massive opportunity to create jobs and revitalize communities.

Where is the best place to put charging stations? The argument has been made that more should be put at Gas Stations since that is where people are used to “refueling” now. Royal Farms & BP have committed to putting more charging stations at their locations.

One such article describing this is here. BP has also committed to doing this as well. More info about this can be found here.

Others argue that charging stations should be installed along major highways and large retail areas where people will be spending 30 minutes to hours at anyway. I agree that both approaches can work, although I think installing the charging stations at retail location and along major highways makes the most sense for now. Until charging to a full battery only takes the same amount of time as a gas tank, spending 30 min or more at a gas station is not what most people want to do.

William Murphy wrote on August 27, 2017 - 6:06am Permalink
We really need to choose carefully... I think paid parking garages are already way behind the curve. I work at what is considered the center of Chicago. The only building with access to every single CTA Line and the parking garage that everyone uses in this area... Has 2 chargepoint systems each with a single L2 charger and one has been broken for years!!! There are at least 20 EVs in this garage on a weekday. Maybe their would be more if they had say 10 spots. Nobody is willing to fight over the only working charger. At a minimum they could upgrade the 2 spots to have L2 each instead of a single L1 and a single L2 per spot. The only way I can charge is to bring my EVSE and use the L1 port. Anyways... Installing many L2 points at work places and shopping plazas and then install L3 chargers at gas stations. Right now I don't think having L3 anywhere someone can walk away is a good idea. Later on sure... But right now people are too rude. L3 stations should charge a reduced rate for 20-30 minutes and then start really ramping it up after that. Right now there is a guy who drives his Chevy Bolt to a Chevy dealer, plugs it into an L3 and then rides his bike to work!!! That's just rude! What happens when someone else needs it? Even these free units need to charge a substantial amount for going past a 70-80% vehicle charge (when they slow down). Where Tesla is ahead of the curve is that they already have a network that is already 5-10 years ahead of what non Tesla owners can look forward too and when non Tesla L3 gets to where Tesla is today... Imagine where Tesla will be?