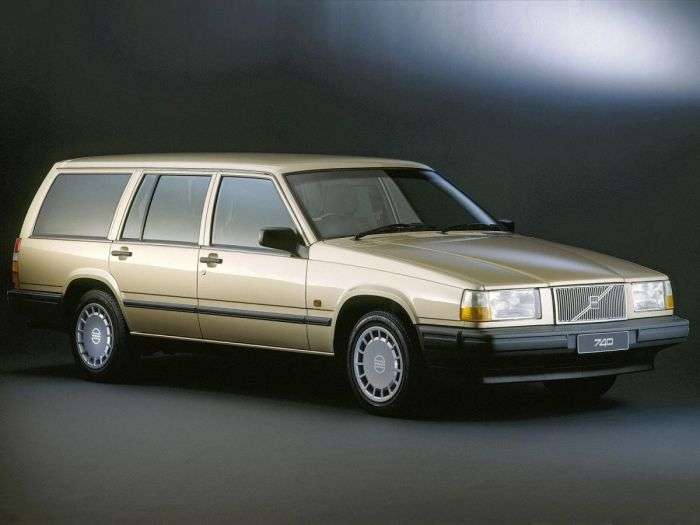 Why Enthusiasts Love Boxy and Beautiful Volvos That Are Coming Back

Are Boxy Volvos like the 745 the next big thing for car enthusiasts? Old Volvos are the ugly ducklings of the car world, but the 1980s are back, and they brought Volvos.
Advertisement

What exactly makes an enthusiast dive into the cultus of a particular manufacturer? On my part, every time I have tried to formulate a theory as to why a gearhead finds himself randomly googling images of '80s Mitsubishi pickups or Taurus SHOs while on the porcelain throne during a 30-minute bathroom break, I’m stymied by the pathological weirdness of these impulses. It’s not performance, sleekness, or perfect engineering; it’s not handling, practicality, or the ease with which a car can be modified.

The oddness and obscurity of a car play a role, but have not been sufficient to redeem cars like the Plymouth Prowler or the loathsome Pontiac Aztek. The closest I can come to a reasonable theory to include all of these outliers is that these affections come from an incredibly imprecise combination of all of these factors.

I confess that I am not short on personal experience with this bizarre, opaque impulse. Once, while on a road trip with 5 other people who are in no danger of being gripped with a desire to buy anything from the pre-airbag era, I had a hell of a time explaining to them why I found the deteriorating and grime-streaked Cadillac DeVille Limo so appealing, whose cocaine-white paint and ruler-straight bodylines had aged little better than the frenzied, sniffling carousers of its heyday. When we passed it on a not-particularly steep hill in Kentucky, it was huffing and puffing as best it could, straining against all the weight which Reagan-era Detroit had thrown at it.

On the way back down, it came past us with some considerable speed, with the driver’s tan Kentuckian elbow hanging out on the door panel. Perhaps, like the thirsty V-8, the brakes were making a struggle against the considerable gravity of the car. It was superb. Why? I couldn’t--and still can’t--figure it out.

Perhaps this is too extreme an example. Even among enthusiasts, my reaction to this car, a car which is perhaps best described in nautical terms, might seem a bit too far left-field. The Volvo phenomenon is a more universally recognizable equivalent. Let’s take the Volvo 745 as an example. Its boxy, awkwardly geometrical shape and modest plastic-covered steel wheels don’t make much of a bedroom-wall poster. Its engine performance--even in factory-turbo form--is not particularly noteworthy, and as for handling.

Well, in the words of a particular owner on a message board, think ‘schoolbus.’ If you were comparing stats with other cars in the same used car price segment, the enthusiast would be able to find plenty of clean, nimble, and perhaps even quick alternatives with better performance and certainly more sexiness. And yet, at a recent Cars and Coffee event which I attended, I noticed that the most astute and pious enthusiasts, the kind whose t-shirts are more usually car-related than not, who always has a tab with Craigslist open, who has at least six 10mm sockets, this kind of enthusiast gravitated not toward the straight-piped Aventador or the handful of other supercars in attendance, but toward the Swedish tank which is the ‘92 Volvo 745. People pointed at it, commented on how “generally awesome” it was, and there was always at least one devotee attempting (usually in vain) to explain its appeal to a less discerning friend. “The redblock can take a good amount of boost ‘cause its cast iron.” Cast iron engines are 1970’s technology. “There is easily enough room to sleep in the back.” Right, because nothing says ‘cool car’ like rear space. “It’s Swedish!” Sweden is not exactly world-renowned for sports car production…

Maybe we’ve come closer to understanding why a car which, on paper, is inferior to any number of others in every metric which may be presumed to be important to the enthusiast, can still be the car which he puts his money into. These kinds of cars don’t offer the focused engineering which provides the performance which all car-lovers crave on some level, but they give the owner opportunities for a massive variety of experiences, especially if this car-lover is willing and able to get his or her hands dirty. Want a quarter-mile drag monster? The redblock can do it with some work. Want to make it take corners?

Fiddle with some sway bars and bushings and you can do that too. The cars have even recently grown in popularity in the stance world. And, of course, you can sleep in the back.

Gregory wrote on June 11, 2018 - 8:54pm Permalink
I still have mine 88 740 turbo. Never sell it.
George wrote on June 11, 2018 - 8:57pm Permalink
I have a 1989 Volvo 740 Wagon. It has custom paint, bagged, 17s, custom gauges, new tweed interior, amped sound system, new engine/trans. I love this boxy lowrider. Th only real drawback, PARTS. I still need door trim, matching driver door weatherstripping, but I love that car. I once put it in a car show. A husband and wife saw it and said ”Our kids need to see your car, we have the same year. They, call it the “Loser Cruiser.”
Jesse wrote on June 12, 2018 - 8:45am Permalink
The cars of today make older cars more desirable for some people. Take the Volvo 745 in this article or Mercedes of the same decade. The cars have a more squared appearance compared to today's cars, and this is a plus. Room inside for people and stuff. The cars of today are cramped inside and hard to see out of. My '09 Corolla is difficult to see out of. You can't see any of the hood past the wiper blades. You can't see any of the trunk lid out of the rear window. One has to be a contortionist to get into the car because of a low roof line. Ditto when getting out. And each new generation of a car seems to have a lower roofline than the previous generation. And the seats have to be lowered to keep a modicum of head room. The center console intrudes on driver and passenger area. I bought a 2017 Chevrolet Silverado last year. It's a 4-door. It drives great and is easy to enter/exit. On interstate driving I get 23 mpg, which for a truck of this size is a plus. Great stretch out room inside. Of the many vehicles I have bought in my lifetime, the Chevrolet Citation was the only car that had truly remarkable room inside for its size.
Jamil wrote on June 12, 2018 - 9:01am Permalink
I have never owned one. I wish a had one. Volvo is a durable and SIMPLE machinery. I own a 2008 C30 never missed a beat but I am still afraid of the complex electronics.
William Harris wrote on June 12, 2018 - 4:23pm Permalink
I have a 1994 Volvo 940 it's in great shape it runs like it just rolled off the line. I can't believe it's 24 years old ! People do double takes when I tell them it's that old !
David wrote on June 13, 2018 - 8:00am Permalink
Volvo's sleek boxy look got me to get this 2017 v90 cross country. Only wish they would have given me a manual rather than the condensed manual on the info screen
Jack E Curenton wrote on February 9, 2020 - 3:48am Permalink
I've driven Volvos since 1985. My first what's a 745 turbo diesel wagon. Phenomenal car that gave me nearly 30 miles to the gallon. My license plate was SMKNURI(Smoke I you're eye) The frame was Back Off Diesel Breath. I was able to put 250,000 miles on that before I traded it in for a 1995 945 turbo gas it was quicker than the 944 Porsche of the day. And like its predecessor. Topped 225 thousand miles I had a brief. Relapse And spent five years. With a Cadillac but returned with my current car a 2009 S80 3.2 it has so far a hundred forty thousand miles. I expect another hundred thousand miles. With no car payments from my Swedish brick
Grant Ellis wrote on April 11, 2021 - 7:48am Permalink
FREE complete B20 engine is anybody interested.
Glenda Lawrence wrote on June 4, 2021 - 4:23pm Permalink
We have two 1800E Volvo cars. One is 1970 and the other is 1972 wagon. They are complete cars. We parked them about 7 years ago and now we cannot keep them. Know anyone interested in them? They really are beautiful.